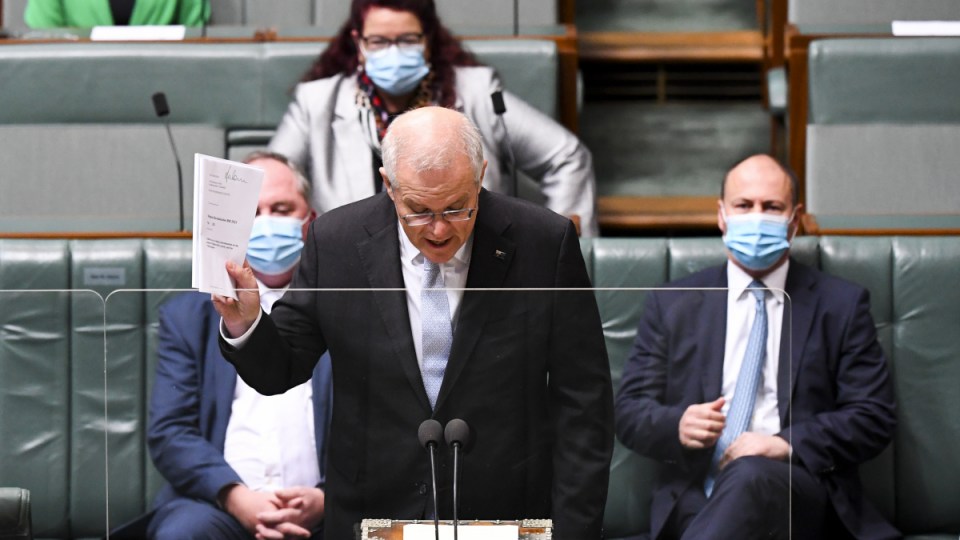 Scott Morrison has introduced into parliament laws to stop the “marginalisation” of religious Australians.

The prime minister personally introduced the contentious and long-promised religious discrimination bill into the House of Representatives on Thursday.

“This bill is a protection from the few who seek to marginalise and coerce and silence people of faith because they do not share the same view of the world as them,” Mr Morrison said.

“Australians shouldn’t have to worry about looking over their shoulder fearful of offending an anonymous person on Twitter … or transgressing against political or social zeitgeists.

“We have to veer away from the artificial phoney conflicts, boycotts, controversies and cancelling created by anonymous and cowardly bots, bigots and bullies.”

One of the most controversial parts of the bill is a clause to protect people who make statements about their religious beliefs even if these are socially disagreeable.

But the coalition has stressed the bill would not protect people who marginalise, harass or vilify people.

“Nothing in this bill allows for any form of discrimination against a student on the basis of their sexuality or gender identity.”

The bill would also override state regulations to let schools preference hiring staff of the same faith as long as this policy is made publicly available.

“A Sikh should not be discriminated against because of the turban they wear … nor a Jewish school seeking to employ someone of their faith, if that faith is their preference,” Mr Morrison said.

Amanda Stoker, who is assistant minister to the attorney-general, was circumspect when asked if a Christian school could refuse to hire a gay teacher under the bill.

“That is something that would depend a great deal upon what that school is prepared to be up front with the community about it,” Senator Stoker told ABC radio.

The coalition remains under pressure to change the Sex Discrimination Act to better protect gay teachers and students.

Senator Stoker said these changes remained on the table, but stressed it was a separate issue to the religious discrimination bill.

LGBTQI advocacy group Equality Australia was concerned the bill would take away existing anti-discrimination protections including on the grounds of sexual orientation and gender identity.

The organisation feared a boss, colleague, teacher or service provider could be protected for saying things including that it’s a sin to be gay.

Labor is treading carefully on the religious discrimination bill, not wanting to be wedged on the issue so close to a federal election.

“We certainly support protection from discrimination on the grounds of faith, and it’s a legitimate area to have protections in place, and we will consult with the community,” Labor senator Katy Gallagher told Sky News.