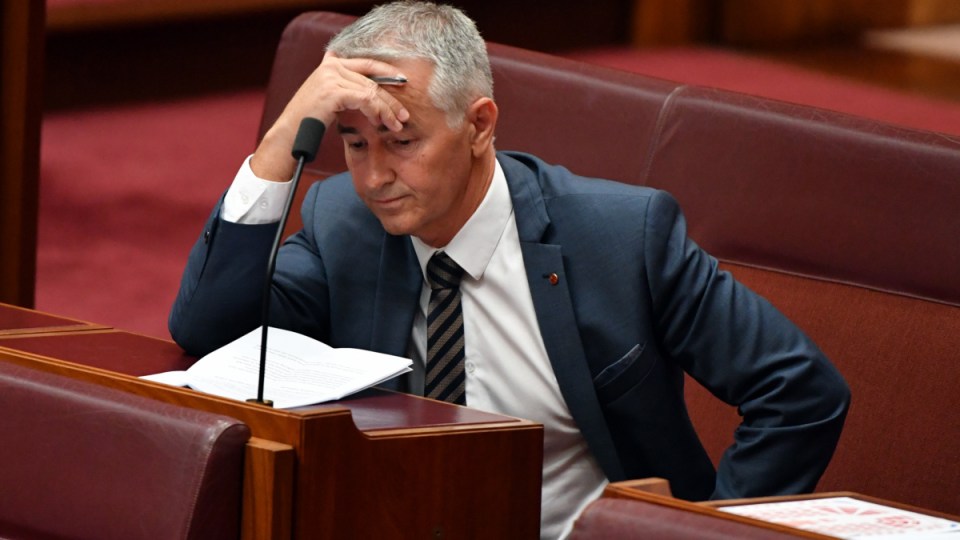 Senator Gerrard Rennick didn't show up for a vote on suspending an inquiry into the ABC and SBS. Photo: AAP

Two Liberal senators who threatened to withhold their vote from the government have partially backflipped, leading to an embarrassing about face in the Senate.

Senators Gerard Rennick and Alex Antic have written to the government whip saying they would vote with the coalition on all non-legislative matters in the Senate despite saying they would withhold their votes over vaccine mandates.

Labor senator Kristina Keneally scolded the two senators, saying they either had the courage to stand up for their own convictions or they did not.

“Senator Rennick has been telling everyone up hill and down dale that he is not for turning,” she said.

“What did we see (after the vote)? A somewhat ashen faced, a somewhat embarrassed, a somewhat dishevelled and dissembling Senator Rennick stand up, unable to articulate why he had not voted or what his position was.”

Senator Keneally also lambasted Senator Antic for capitulating to the government, saying their threats were being watered down by the day.

“There he was, Chamberlain with his email, capitulating to the Liberal-National whips.

“(Their protest) is becoming a little more conditional. Either these senators have the courage of their convictions or they do not.”

It followed a stumble by Senator Rennick on Tuesday which meant the Labor and Greens were able to suspend an inquiry into the ABC and SBS.

Senator Rennick then tried to have the vote taken again hours later after the government admitted he made a mistake.

Due to the pandemic, the government and opposition have a pairing arrangement when not all senators can attend parliament to ensure votes are accurately recorded.

Senator Rennick was paired with a Labor senator, meaning he was supposed to have voted in line with the government opposing the inquiry’s suspension, but did not show up to the vote.

The inquiry’s suspension passed by a single vote.

A senator can seek to have the vote recommitted if they voted the wrong way or were unable to make it to the chamber before the doors were locked.

“They are not a second shot in golf because you shanked the first one,” he told the Senate.

The government did not seek to recommit the vote on Wednesday morning after Senator Rennick tried to do so on Tuesday evening.