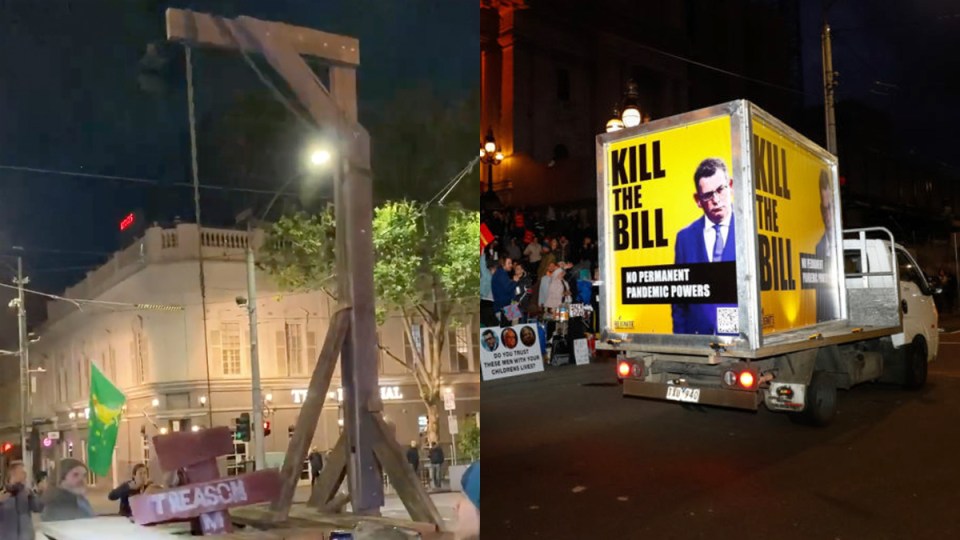 Death threats against politicians and their wives and children. An alleged attack on an MP’s daughter. The haunting and, it must be said, frightening image of a hangman’s gallows. The staging of a mock execution, neo-Nazi symbols and angry mobs on the streets of Melbourne.

And while protests have not been as “rabid” – to use Victorian Premier Daniel Andrews’s own phrase – in other cities, they appear to be gaining momentum.

Several hundred people this week converged on the home of Queensland’s State Government in Brisbane.

“Kill the Bill”, they chanted in Melbourne.

“Do you accept Apartheid, December 17”, a sign read at the Brisbane protest.

In Melbourne it was a protest against the controversial Pandemic Bill, which was then before Parliament but has since been put on hold due to a deadlock in the upper house.

In Brisbane, it seemed a bit all over the place. December 17 is when the state is expected to be 80 per cent fully vaccinated and for its citizens to regain suspended freedoms.

In Victoria, most of those freedoms came on Friday, with the state on track to have 90 per cent of the population over the age of 12 fully vaccinated by the weekend.

There is no argument that we all have the right of freedom of expression and the right to protest safely.

But who wants their children seeing a gallows, complete with three nooses, in our streets and to hear threats to kill our political leaders or indeed images likening them to Adolf Hitler?

And the fears of some appear to have been realised in Melbourne.

Animal Justice MP Andy Meddick says that his adult daughter, Kielan, suffered a scalp wound in a Thursday night confrontation that her father believes was motivated by politics.

Taken to hospital, Meddick’s daughter required three stitches to staunch the flow of blood while her anxious dad waited at her bedside.

“I have reason to believe this could be linked to my role as an MP and the positions I have taken on the pandemic response,” said Mr Meddick, who has been a key swing-vote supporter of Premier Andrews’ bill.

Mr Andrews describes the protestors as “rabid, extremist, anti-vaxxers” who do not represent our community”.

So who do they represent, and is the perceived and much talked about rise of the far-right a reality in Australia?

Some say the organised far-right is now exploiting the fear created by the COVID-19 pandemic and the resultant new laws in order to push their own fringe agendas and garner followers and membership.

That, coupled with a Prime Minister already in election mode and attempting to wedge his Labor counterparts, is not a good mix.

Andrews and Morrison on Friday engaged in a war of words after Morrison said people are tired of politicians telling them what to do and it was time for governments to step back.

Andrews hit back, accusing the Prime Minister of “doublespeak”.

The federal Opposition accused Morrison of sounding like Donald Trump and the West Australian Premier accused him of dog-whistling to anti-vaxxers.

Morrison himself responded by denouncing violence, threats and intimidation, and he condemned the protestors.

The extreme far-right was once considered a lunatic fringe in Australia.  Terror expert, Professor Greg Barton at Deakin University, says that’s not the case anymore.

Those on the far-right are now much more closely aligned with global populism. Professor Barton says that under Donald Trump terror attacks by far-right extremists increased two-fold in the US.

And Australia’s political leaders need to heed the lessons of the US. The rhetoric of Scott Morrison in the past few days is akin to playing with fire, according to Professor Barton.

Only a very small percentage of those protesting in Melbourne are from the far-right, it’s true. It’s also true that what is publicly known about far-right extremists in Australia is limited.

Victorian Greens leader Samantha Ratnam says the “growing threat of the far-right and neo-Nazi extremism” must be urgently investigated by the Victorian Parliament. Her party has a motion before the Parliament which she hopes will be debated in the next sitting week.

Victorian Trades Hall Council secretary Luke Hilakari is also on the record as saying there needs to be a royal commission into the far-right in Australia.

A growing legion of extremists

The powerful federal Parliamentary Joint Committee on Intelligence is currently holding an inquiry into extremist movements and radicalism in Australia. Public hearings in that inquiry concluded earlier in the year and the committee is now writing its report, which may well be released by the end of 2021.

The inquiry heard there had been a huge rise in the number of violent extremists under surveillance by authorities in Australia. Domestic spy agency, the Australian Security Intelligence Organisation, also told the inquiry that some on the far-right were taking advantage of the pandemic to increase membership.

“During 2020–21, these investigations approached 50 per cent of our onshore priority counter-terrorism caseload,” the agency says.

And the report notes there is a growing number of young people – predominantly young men – who are being radicalised by these ideologies.

Given that observation by ASIO it seems hard to argue that a fulsome inquiry is overdue.