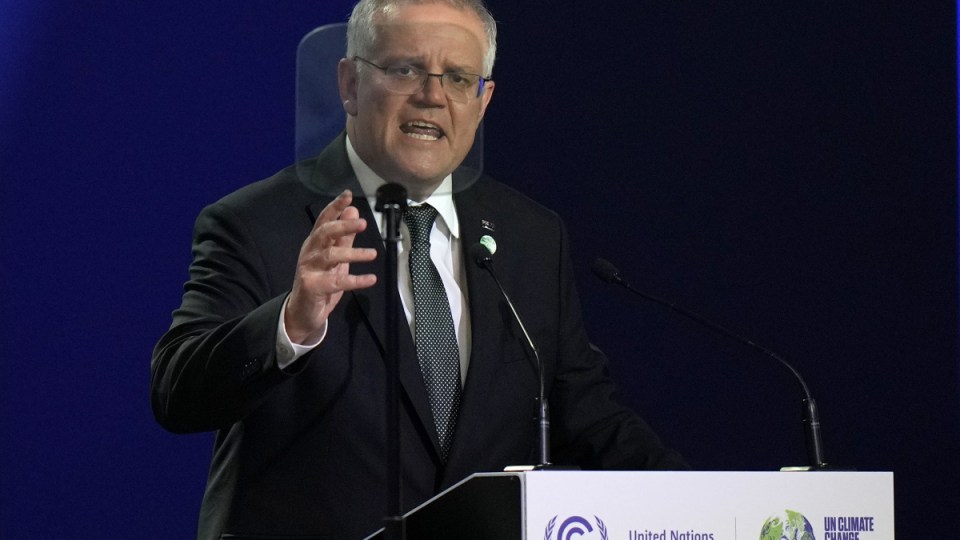 It will be scientists, not politicians, who solve climate change, Scott Morrison has told COP26. Photo: AAP

Scott Morrison has told world leaders developing nations needed to be equipped with low-cost solutions in order to cut their emissions.

In an address to the COP26 climate summit in Glasgow, the prime minister said cleaner technologies needed to outcompete existing means of production, but he did not mention fossil fuels.

“Raising the cost of energy just impacts on those who can afford it least.”

Modelled on the coalition’s emissions reduction fund, the scheme is “designed to develop a high-integrity carbon offset scheme in the Indo-Pacific region”.

“The partnership will see our two countries share expertise to ensure Fiji is internationally recognised as a source of high-integrity carbon mitigation outcomes,” Mr Morrison said in a statement.

Opposition Leader Anthony Albanese hit out at the prime minister’s address to the summit, saying the announcement was nothing new.

“We welcome, of course, any additional support for our neighbours in the Pacific, but we also note that this comes after considerable cuts to our foreign aid budget,” Mr Albanese told reporters in Sydney.

“We have a responsibility and also an interest in engaging in the Indo-Pacific on climate change.”

In his speech at the summit, Mr Morrison compared the challenge of climate change to the development of COVID-19 vaccines.

“It will be our scientists, our technologists, our engineers, our entrepreneurs, our industrialists and our financiers that will actually chart the path to net zero.

“And it is up to us as leaders of governments to back them in.”

Mr Morrison said developing lower-emissions technologies was at the heart of Australia’s target of net zero emissions by 2050.

Another 30 per cent lies with “further technology breakthroughs” and “global technology trends”, with domestic and international offsets projected to make up the gap.

Mr Morrison talked up Australia’s updated projections to cut emissions by between 30 and 35 per cent on 2005 levels this decade.

But former prime minister Malcolm Turnbull said Australia could not take credit for something it refused to make enshrine as a target.

“A projection is … just a guess. So that there’s no question that the failure to increase our 2030 target is disappointing,” he told ABC radio.

Before leaving the summit, Mr Morrison is expected to announce with the United Kingdom, India and small island developing states a new funding mechanism for building disaster-proof infrastructure in the Pacific.