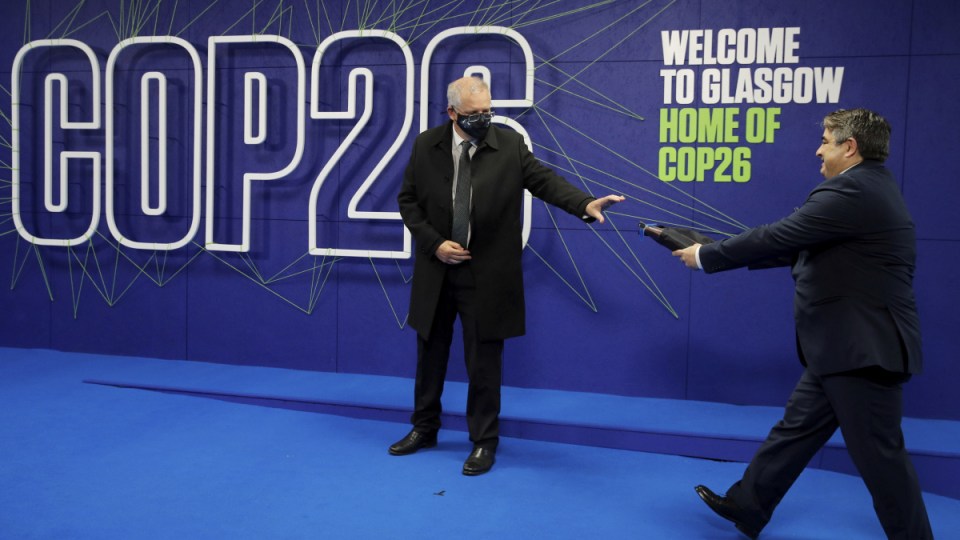 The PM has used his political microphone to fire back at the French president's claims he lied. Photo: AAP

The prime minister maintained Mr Macron knew there were problems with the Naval Group project before Australia announced it was torpedoing it.

But Mr Turnbull, under whom the 2016 contract for the Attack Class vessels was signed, thinks Mr Morrison owes the French an apology.

“When you’re dealing with people, honestly, and Scott Morrison did not do that, you don’t drop hints. You actually tell the truth.

“It was a partnership between two nations, it was a cornerstone of France’s Indo-Pacific strategy and to be double-dealing them the way Morrison did was shameful.”

Mr Macron told Australian journalists at the G20 summit on Sunday “I don’t think, I know” the prime minister lied to him about the submarines.

Mr Morrison retaliated on Monday, detailing problems with the program during a news conference at the COP26 climate summit in Glasgow.

Mr Morrison explained he made it “very clear” to Mr Macron in June the conventional diesel-powered submarines were not going to meet Australia’s strategic requirements.

“We discussed that candidly. I did not discuss what other alternatives we were looking at,” he said.

“It’s no secret, I’m sure in Australia, that this was a project that had few friends, and that is a point that we had made to Naval and particularly to the French government.

“It’s clear from President Macron’s statements yesterday that the level of offence is still very great and we will wait for that to subside.”

Australia in September announced it was cancelling the 2016 contract to acquire conventional Attack Class submarines from France’s Naval Group.

Instead, the government is spending 18 months looking at the feasibility of acquiring technology for nuclear-powered vessels from the US and UK under the AUKUS partnership.

Communications between the two leaders was also leaked to the media, with the French president reportedly telling Mr Morrison “I don’t like losing”.

Days before the announcement, Mr Macron reportedly messaged Mr Morrison asking: “Should I expect good or bad news for our joint submarine ambitions?”

Defence Minister Peter Dutton said it was “a bridge too far” to accuse the prime minister of lying to the French.

“There’s just no suggestion at all that can be credibly made about the prime minister lying,” he told 2GB radio.

“We had factored in all along that the French were going to be upset about losing a contract of this size.”

The Stats Guy: What does tourism in Australia look like now that travellers are returning?
Paul Bongiorno: Scott Morrison’s trustworthiness takes a battering on the world stage
Today's Stories