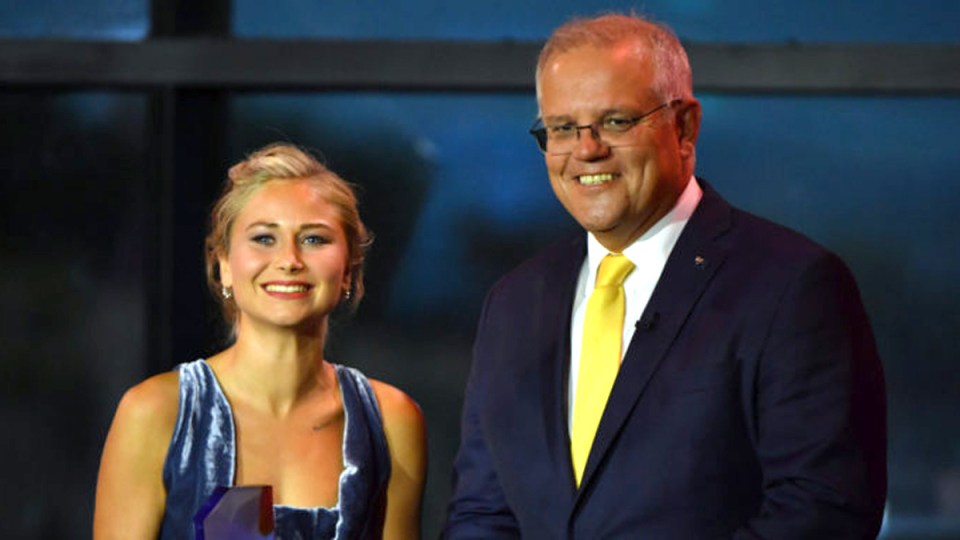 Grace Tame with Scott Morrison on the night she was named Australian of the Year. Photo: AAP

Australian of the Year Grace Tame has been snubbed by the federal government in developing its landmark strategy to prevent child sexual abuse.

Ms Tame, a former child abuse victim and long-time advocate for survivors, was left out of planning for the 10-year plan revealed by Prime Minister Scott Morrison in parliament on Thursday.

She learned of it only during an interview with ABC TV on Friday.

“The government’s announcing details of a national strategy to prevent child sexual abuse next week. I am presuming you have been involved in the drafting of that. What can we expect?” host Ros Childs asked Ms Tame.

“You haven’t been?” Childs said.

“I haven’t been involved in the drafting of that,” Ms Tame said.

Ms Tame, 26, is one of Australia’s best-known advocates for survivors of sexual assault. She was repeatedly raped by her 58-year-old teacher as a teenager and then fought a lengthy legal battle to be allowed to tell her story.

She told Childs she would have liked to have been included in developing the federal government’s strategy.

“I mean, that’s my job. And I’ve been banging on about it all year – that we should be focusing on prevention,” she said.

“But I’m not going to be a malcontent and complain I haven’t been invited to participate in that.”

“I think it’s really important that we are teaching kids as early as possible to know their rights. And also to be aware of these behaviours,” she said.

Also on Thursday, Mr Morrison marked the third anniversary of the National Apology to Victims and Survivors of Institutional Child Sexual Abuse.

He announced the Blue Knot Foundation, alongside the Australian Childhood Foundation and The Healing Foundation, would establish a national child sex abuse prevention centre.

The centre will build knowledge and expertise, as well as raise awareness of the impacts of child sex abuse.

“The voices of victims and survivors will shape their work,” he told parliament.

“The shocking truth is online child sexual abuse was already increasing and it has spiked in response to the COVID-19 restrictions,” he said.

“We cannot allow our digital environment to offer anonymity and impunity to offenders, it cannot shelter them.

“Nor can we allow it to become a prohibitively hostile and hazardous place for children to be since so much of their learning and experience depends on them being able to enter it safely.”

The national child abuse redress scheme has delivered 6200 payments totalling $535 million with an average payment of $85,000.