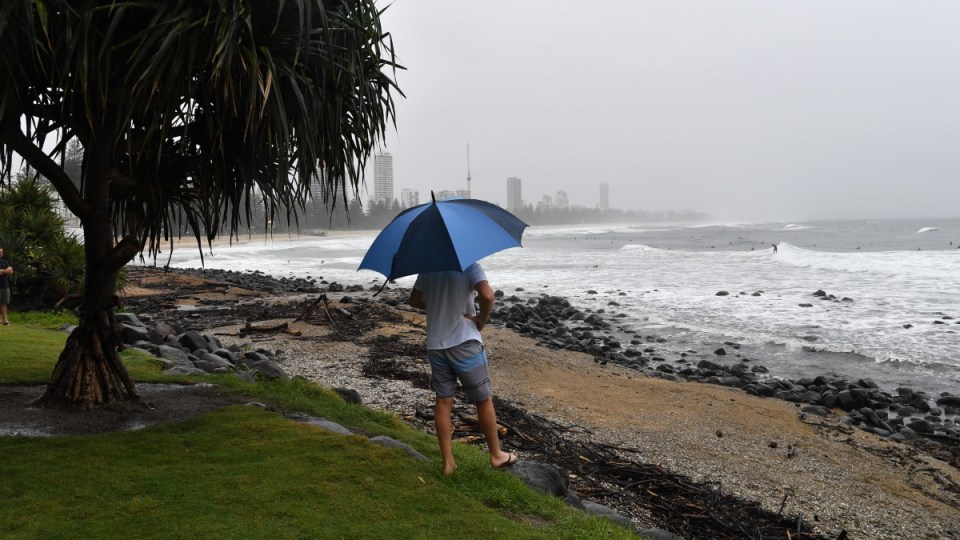 Queenslanders brace for another severe thunderstorm along the east coast. Photo: AAP

More storms are forecast for Queensland on Thursday, with heavy rainfall and damaging winds expected to wreak further havoc on Australia’s east coast.

The Bureau of Meteorology reports supercell thunderstorms are threatening to form for a third day, in a 1000-kilometre stretch from south-east Queensland to northern NSW, as the annual storm season brings more severe weather warnings.

The same areas were battered by torrential rain, giant hailstones and damaging winds on Wednesday.

Thursday’s warning was issued for people in parts of the south-east coast of Queensland, with a hazardous conditions expected for “the next several hours”.

Severe storms are also developing in north-west Queensland, with damaging winds expected there.

Residents from Moreton Bay down to the Gold Coast were warned of an immediate threat on Thursday afternoon.

Damaging winds, large hailstones and heavy rainfall are likely to spread across Brisbane this afternoon and into the evening.

The NSW SES received more than 800 requests for assistance after the intense storm, but there were no reports of injuries.

“A lot of the requests for assistance we’ve received, many of them have been for severely damaged roofs, including damaged skylights, solar panels and water that’s come into people’s homes,” he told the ABC.

Footage online showed the Toormina Shopping Centre in Coffs Harbour collapsing, forcing the evacuation of 400 people, after the freak storm led a store roof to collapse.

Coffs Harbour was again the firing line on Thursday, the BOM said. But the conditions were unlikely to be as bad.

Meanwhile, there were more than 120,000 lightning strikes in the Queensland town of Mackay, and 10,000 homes were left without power on the central coast.

Gusts of up to 120km/h – the strongest in the region since records were kept – were recorded at Mackay Airport on Wednesday night.

Downed power lines were reported in the region as well as golf-ball-sized hailstones posted online in the aftermath.

Some residents are expected to be without power until Thursday afternoon.