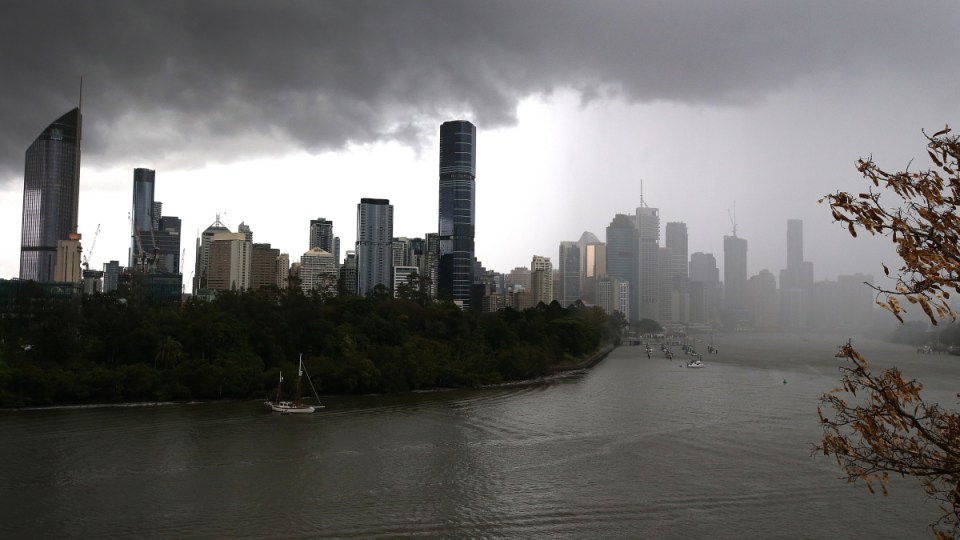 Beaches in Queensland have been closed as ex-cyclone Seth churns off Australia's east coast. Photo: AAP

Storms are forecast to bring more large hail, heavy rain and damaging winds to Queensland on Wednesday, while South Australians face a hot and windy change that will head towards the eastern states.

On Wednesday afternoon, the Bureau of Meteorology warned Queenslanders to prepare for another battering of hail.

There were also reports of hailstorms already in the Coffs Harbour area, on NSW’s north coast, with a shopping centre roof caving in.

The local SES said it was responding to calls for help, while the Nine Network reported a freak hail storm had caused the roof of Coff’s Harbour’s Toormina Shopping Centre to collapse.

About 400 people were evacuated from the complex.

It came a day after Queensland set a record for the largest hail to hit the country, with 16-centimetre hailstones smashing windows and car windscreens during a ferocious storm at Yarlboroo, near Mackay.

“The same mixture of abundant moisture and prolific instability that created Tuesday’s storms is again triggering supercells in eastern Australia today,” he said.

On Wednesday, the storm threat is more widespread. People from south of Townsville down to the Gold Coast have been warned, with Rockhampton predicted to be hit hardest.

“Severe storms likely to produce damaging, locally destruct winds, large, possibly giant hailstones and heavy rainfall that may lead to flash flooding in the warning area over the next several hours,” BoM reports.

Mount Morgan, Yeppoon and Byfield are also likely to be heavily affected.

“Mother Nature has given us a timely reminder that severe weather season is now upon us, and these conditions are expected to continue over the coming days, particularly around south-east and central Queensland,” Mr Grant said.

“We are expecting our metropolitan areas, including Brisbane, Sunshine Coast, Gold Coast and Ipswich to be under the potential to see further severe thunderstorm activity.”

The previous hailstone record – 14 centimetres – also came in Queensland, during a storm in the state’s south-east in 2020.

Meanwhile, in South Australia, there was a fire danger warning for residents in the northern goldfields and Upper Flinders regions. A strong south-westerly wind change will move across the state’s west and north on Wednesday afternoon and into the night.

The “vigorous change” is expected across much of the state, with severe weather warnings issued for damaging winds and raised dust.

South Australians can expect northerly winds ahead of a gusty southwesterly change on Wednesday night.

Damaging northerly winds averaging 40-65km/h, with gusts of up to 90km/h, are possible ahead of a cooler squally change extending from the west, BoM said.

Damaging south to south-westerly winds averaging 50-70 km/h, with gusts of 90-100km/h, are also possible with and immediately following the change.

The change was reported near Ceduna on Wednesday morning. It was expected continue to move east throughout the day. Adelaide was forecast to reach 30 degrees on Wednesday, before much milder conditions on Thursday.