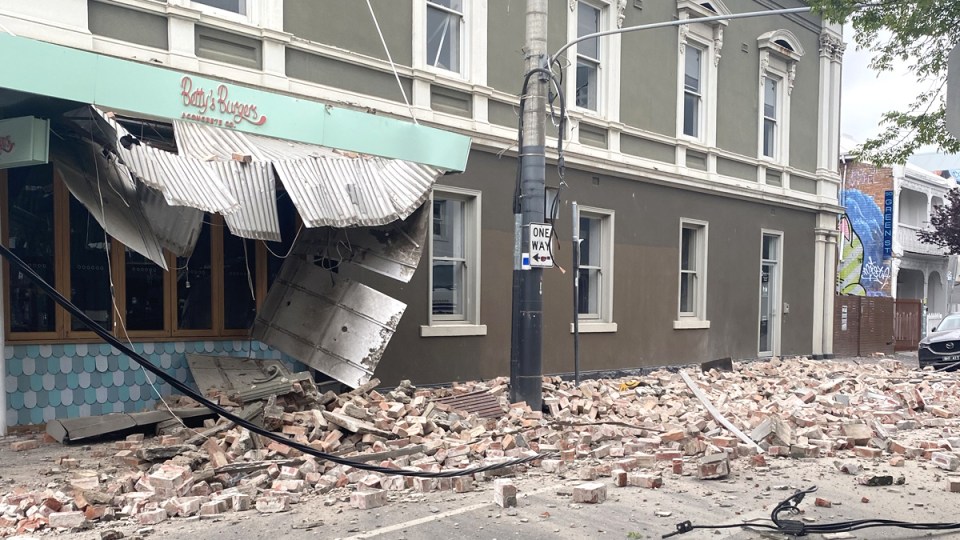 A building on Chapel Street in Melbourne's south-east was damaged by the quake. Photo: TND

An earthquake centred in regional Victoria has damaged buildings in Melbourne and was felt as far away as Tasmania, the ACT and NSW.

Geoscience Australia said the earthquake, which was 10 kilometres deep and centred at Mansfield in Victoria’s high country, struck about 9.15am on Wednesday.

It was initially reported as a magnitude 6 but then downgraded to 5.8. The quake was followed within minutes by a second, a magnitude four, that hit just before 9.30am.

An aftershock of magnitude 3.1 has also been recorded.

Victorians took to social media within minutes to report they had felt shaking.

Houses in Melbourne were shaken, while there was also movement reported in buildings in Geelong and at Canberra’s Parliament House.

Building movement was also reported in Sydney’s CBD, with people at home in some suburbs of Sydney reporting feeling the tremor.

Victoria’s State Emergency Service confirmed the first earthquake was centred under Mansfield, which is about 200 kilometres north-east of Melbourne.

The SES said there was “no tsunami threat”.

The SES warned residents with building damage or who required its assistance to be patient as lines may be busy.

This footage is yet to be verified, but if it’s legit then here’s damage to an inner city suburb of #Melbourne from that 6.0 magnitude earthquake in #Victoria at 9:15am today.

(When I saw ‘earthquake in Victoria’ I actually thought it was from those riotous #CFMEU protests) https://t.co/UvdmW6ZZ2l

The SES received calls for assistance from across Victoria but said in the minutes after the quake it was yet to fully assess the damage.

There were reports of damage across suburban Melbourne, including in Prahran, Brunswick, West Melbourne and Albert Park and to the exterior of Betty’s Burgers on Chapel Street in Windsor. Melbourne’s tram operator tweet that it had halted trams along the busy strip due to earthquake damage.

Aftershocks have also been reported, with SES Victoria providing advice on what to do to stay safe

“Drop, cover and hold on”, the emergency service said.

“It just scared the hell out of us,” Lynne Myers, of High County Apparel in Mansfield, said.

“Everything shook, the roof shook, boots fell off the shelf and I just ran outside.

“There’s no cracks or anything in the walls. We seem to have got over it pretty well. Everyone’s a bit shaken up here but there doesn’t seem to be any damage.

“I’ve lived here 29 years and have never felt anything like it.”

The tremors were felt as far north as Newcastle, and also in the ACT, Launceston in northern Tasmania, and Adelaide.

Shaking was also felt on the NSW central coast, nearly 1000 kilometres from Melbourne.

Former Nationals leader Michael McCormack told the ABC by text that workers had been evacuated from buildings in Wagga Wagga.

Mansfield mayor Mark Holcombe said people ran into the streets in the northern Victorian town when the tremor hit. But he had heard no reports of damage.

“I was sitting down at work at my desk and I needed to run outside, it took me awhile to work out what it was,” Mr Holcombe said.

“I have been in earthquakes overseas before and it seemed to go on longer than I have experienced before. The other thing that surprised me was how noisy it was – it was a real rumbling, like a truck going past.

“All of the birdlife, quite interestingly, went berserk, so that was a real sign that something was quite wrong.”

“At this stage, we have had no reports of serious injuries or worse and that is very good news and we hope that good news will continue,” Mr Morrison said.

“It can be a very, very disturbing event for an earthquake of this nature.

“They are very rare events in Australia and as a result, I am sure people would have been quite depressed and disturbed by that, particularly in the most immediate area effected.”

It is the largest tremor in Australia since a magnitude 6.2 earthquake in north-western Western Australia on August 10, 1997.

Inside sex trafficker Ghislaine Maxwell’s 20-year prison sentence and what happens next
‘There’s no other way’: Daniel Andrews urges Victorians to stay the course
Today's Stories