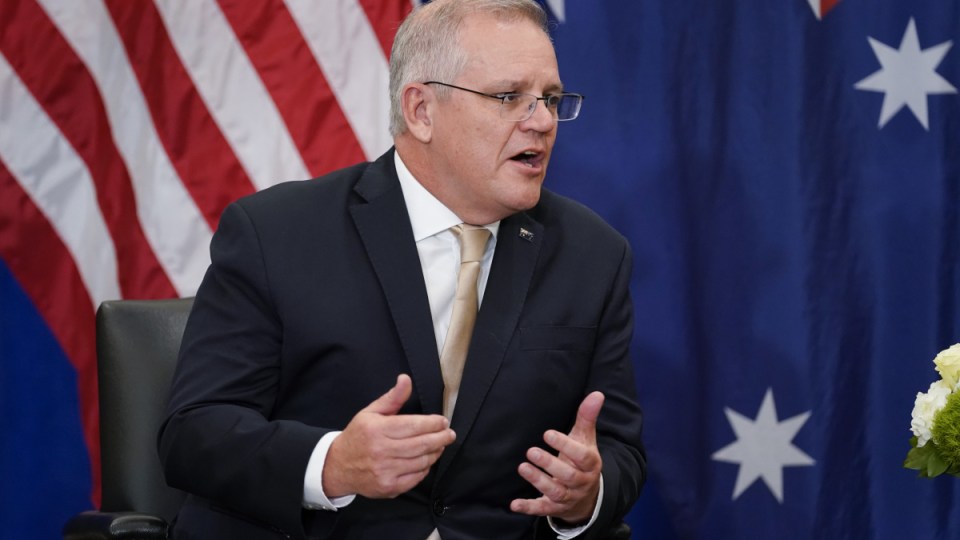 Prime Minister Scott Morrison has met with President Joe Biden on the sidelines of a UN meeting. Photo: AAP

Australia is holding firm in the face of sustained European anger over a torn-up $90 billion French submarine contract that has sparked a major diplomatic rift.

The French government claims it was blindsided by the announcement of the AUKUS pact between Australia, Britain and the United States.

But Mr Morrison indicated Australia earlier raised concerns about the suitability of the French submarines for the strategic situation in the Indo-Pacific.

“We have made it clear for some months that the capability of a conventional submarine, to operate in that environment which we now face, pose serious risks,” he said in New York on Wednesday (local time).

“The environment that we’re seeking to operate has changed. I don’t think there’s any dispute about that.”

Mr Morrison said Australia had a firm view conventional boats would not be suitable.

“We took the decision that we have every entitlement to take. To protect Australia’s interests and advance our national security,” he said.

The submarine deal has cast a shadow over upcoming free-trade negotiations with the European Union.

Mr Morrison told European Council president Charles Michel that Australia wanted to work with the bloc in the Indo-Pacifc but received a frosty response.

“Thank you for your message but as you know for us transparency and loyalty are fundamental principles,” Mr Michel said.

After the meeting European representatives, Mr Morrison said free-trade negotiations were separate from the submarine deal.

“It’s no easy thing to land a trade deal with Europe,” he said.

He said a 50-minute meeting with Mr Michel had assisted understanding of the submarine decision.

Trade Minister Dan Tehan said it was unlikely France would walk away from the negotiating table despite the AUKUS uproar.

Speaking ahead of the latest round of negotiations, Mr Tehan said it was in France’s interest to sign the deal.

“The economic weight of the globe has shifted to the Indo-Pacific,” he told the National Press Cub.

“This is where the most economic activity globally is taking place, and what the EU-Australia FTA does for Europe is to enable them to get that very important foothold.

“That doesn’t mean it’s not going to be hard-fought.”

Mr Tehan will travel to Europe next week to meet EU trade representative Valdis Dombrovskis after stops in Indonesia, India and the United Arab Emirates.

“Ultimately, my hope is that when countries of the EU look at the hard reality of their national interest, they will see that it’s important for them to conclude a deal with Australia,” he said.

Mr Tehan said France had the right to express its anger over the submarine deal.

“If you put the boot on the other foot, I think Australia would be similarly disappointed,” he said.

“But ultimately, in the end, I think what’s going to be really important is that ability for us to be able to sit down and work through this issue.”

The AUKUS pact could also include Australia hosting nuclear-powered submarines from Britain before construction starts.

Mr Morrison confirmed the possibility but said there were no commitments yet.

“Being able to bring that capability to our region and to work with that, that provides training opportunities for Australians as well as we seek to build our capability,” he said.