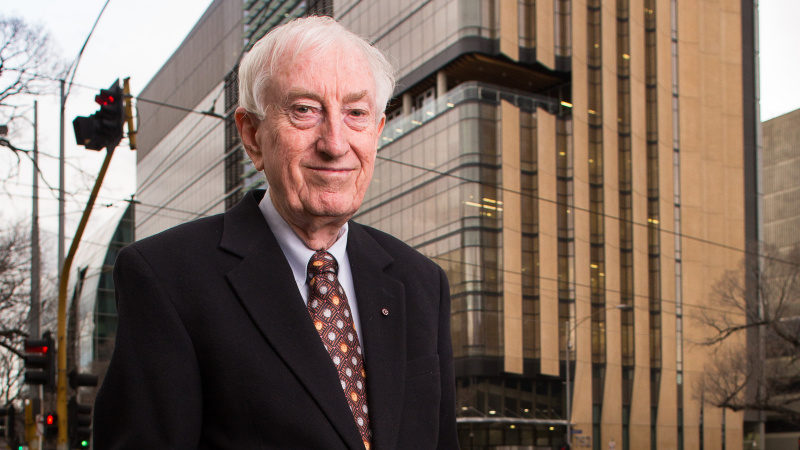 In October 2019, Nobel Prize-winning scientist Peter Doherty was celebrating his 79th birthday and getting ready to bring a 57-year career in research to a close.

A former Australian of the Year and National Trust Australian Living Treasure, Professor Doherty had decided it was “a good time to ride off into the sunset” and spend more time on writing and other pursuits.

Then reports of a new virus emerged from China.

In December 2019, ophthalmologist Li Wenliang “used social media to alert some of his colleagues to cases of acute respiratory compromise that were similar in symptomatology and progression to the original severe acute respiratory syndrome (SARS) of 2002–03”, Professor Doherty recounts in his recent book, An Insider’s Plague Year.

The world would soon come to know it simply as ‘the coronavirus’.

The virus brought a halt to Professor Doherty’s retirement plans as he found himself again in the public spotlight as the nation looked to experts to make sense of the unfolding crisis.

‘I realised that this was serious’

In February 2020, he began attending three-times weekly strategy meetings at the Doherty Institute, the Melbourne-based infectious diseases research centre named in his honour, as the threat posed by SARS-CoV-2 became more apparent.

“I realised that this was serious and our people were already very engaged,” Professor Doherty tells TND over the phone from his home in Melbourne’s biomedical research epicentre dubbed the ‘Parkville precinct’.

With his days in the lab behind him, Professor Doherty volunteered to get involved by doing “low level” public communication, leaving the slots on “really prominent programs” to the other senior people at the Doherty Institute to help them build media profiles.

Then, in April 2020, Professor Doherty found himself going viral, on Twitter, with a rogue post: “Dan Murphy opening hours”, he tweeted accidentally.

With many searching for hope and humour in lockdown, it was a moment that humanised the great Australian and won him a host of new fans. Professor Doherty chuckles when recalling the now-famous tweet, and says that ironically, he has since given up drinking alcohol entirely.

“I’m completely sober”, he laughs, saying he has been experimenting with non-alcoholic wine, but is yet to find any to his taste.

Professor Doherty was brought up in the Methodist church, and while not religious, he says the social values he was taught as a young man shape his views today.

“[Methodism] is very much socially concerned, and the part of Christianity that emphasises all of that good tradition of service, compassion, and all of that,” he says.

When it comes to valuing and investing in health care and our social welfare system, “we could learn an incredible amount from this pandemic,” Professor Doherty says.

‘Small government’ ideology falls apart during a pandemic, he says, as “all a small government does is screw the poor and give money to the rich, you don’t have to be a genius to see it”.

“We know that if you want to really promote the economy you give money to poor people, they spend it,” he says.

“Give it to rich people and they put it in the Cayman Islands.”

“As I’ve worked on aspects of infection and immunity for almost six decades, I am an insider. In the present context, though, that description also reflects that the Doherty Institute has been at the heart of the enormously successful Australian response to COVID-19,” Professor Doherty writes in An Insider’s Plague Year.

The Institute’s modelling is currently being used to underpin the federal government’s reopening plans and vaccination targets, and as such, is the subject of intense debate.

The role of the “so-called Doherty modelling, which actually involves five other universities as well” is to “try to provide the parameters, the limits” around what the government can do when it comes to reopening Australia, Professor Doherty explains.

The modelling is “great and an enormously intense exercise with very smart people involved”, he says, while being careful to acknowledge that “models are experiments” based on “a lot of assumptions”. The more infectious Delta variant poses a problem, as there is a “real lag phase in things happening and actually getting data out of it” to inform modelling.

The evolving nature of the pandemic presents a challenge for politicians when it comes to messaging, Professor Doherty says.

“People want definite messages. Basically, people are not used to living in the kind of world I live in where you’re being presented with constant challenges and you have to change your direction a little. People don’t like that. They want certainty and there’s no certainty,” he says.

“The question is, it’s not clear it will be up to us. The virus may open us up before the politicians do. There’s no certainty in this.”

Instead of making predictions about how the pandemic will develop, Professor Doherty acknowledges the big unknowns.

“We don’t know what’s going to happen next. We don’t know whether we are going to get what you call an ‘immune escape’ variant, like flu, where it will flow past the vaccines,” he said.

Barring an immune escape, though, Professor Doherty is hopeful that relative normality will return by the latter half of 2022.

While eyeing Australia’s road out of the pandemic, Professor Doherty is also looking back on six decades of service to science.

Rather than dwelling on his glittering achievements, he’s typically humble.

“I’m just grateful to be able to feel I’m making a contribution in some sense,” he says.

An Insider’s Plague Year by Peter Doherty is out now, published by Melbourne University Press