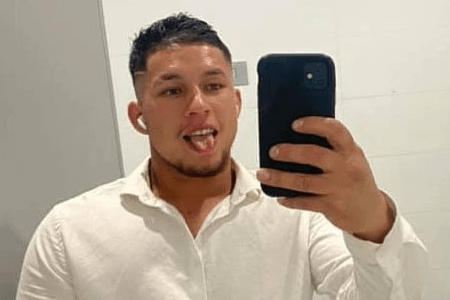 Alleged to have fled Sydney's lockdown, tradesman George Thompson has been named as the man at the centre of Queensland's latest outbreak. Photo: Facebook

A 26-year-old man who was fined almost $10,000 on Tuesday for allegedly fleeing Sydney’s lockdown to meet a Qantas flight attendant in northern NSW has been identified by Queensland police as Sydney tradesman George Thompson.

The ABC reported Queensland police were forced to use hotel CCTV to identify Mr Thompson after 36-year-old Brisbane flight attendant Mel Waterhouse refused to give police his name when it emerged the pair had allegedly violated the state’s border restrictions.

Both have tested positive to COVID-19 and are alleged to have travelled around the southeast of Queensland.

Ms Waterhouse, who is also known as Malynda Gray and who previously claimed to be the ex-partner of Ricky Maddison, the man who shot and killed Toowoomba police senior constable Brett Forte in 2017, has been fined more than $4000 for bringing Mr Thompson over the NSW-QLD border.

Queensland’s border restrictions mean anyone who has been in a COVID-19 hotspot cannot enter the state unless they have a valid border declaration pass.

Mr Thompson allegedly breached Sydney’s lockdown and flew to Ballina where he met Ms Gray, who allegedly picked him up on July 14 and breached border restrictions by driving him to the Gold Coast and Brisbane.

He is alleged to have visited three barbers at Westfield Chermside and to have given them false information on checking in – with Queensland Health only becoming aware of his COVID-19 status after identifying him as a close contact of Ms Waterhouse.

According to the Courier Mail, Mr Thompson was given a negative test result from a Sydney laboratory that later told him they had made a mistake and that his result was in fact positive.

But Mr Thompson is alleged to have kept hidden his positive test result from Queensland authorities.

He is believed to have infected Ms Waterhouse who reportedly tested positive for the virus on July 22 after feeling unwell for about a week.

A Qantas spokesperson told the ABC she had not returned to work since she tested positive for the virus as she was in hotel quarantine.

The ABC reported the company will investigate her behaviour and the events that led the police to issue a $4315 fine once she returns.

Meanwhile, Mr Thompson is reportedly being treated in the Royal Brisbane and Women’s Hospital after being admitted on Sunday from hotel quarantine.

Queensland police gave three infringement notices to Mr Thompson on Wednesday, alleging he opened the door of his hotel quarantine room while maskless and “verbally abused” staff after being told he had the virus.

“It is alleged after warnings, and with full knowledge of his positive Covid-19 delta strain diagnosis, he continued to open his door while not wearing a face mask,” police said in a statement.

Police told the ABC that Ms Waterhouse had not fully cooperated with contact tracers and had engaged a lawyer.

Neither Mr Thompson or Ms Waterhouse have been charged.