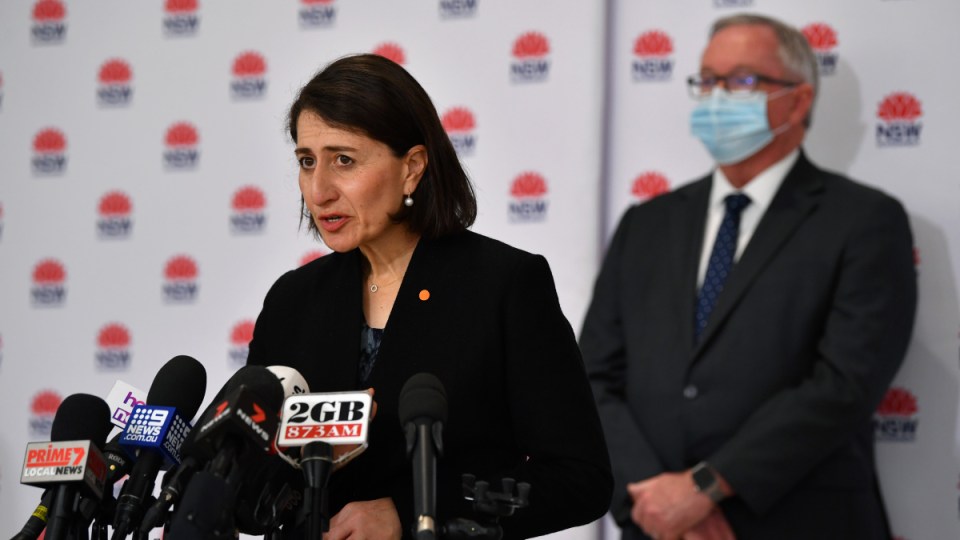 The NSW government has warned Australians to brace for more deaths linked to the latest outbreak. Photo: AAP

Australians have been told to expect more COVID-related deaths in NSW as the state struggles to contain its outbreak of the highly infectious Delta strain.

Another 172 locally acquired cases and two virus-related deaths were reported on Monday as a five-storey apartment block was plunged into lockdown and the state’s Health Minister warned that more deaths were likely.

The toll from the state’s 2021 virus outbreak has risen to 10, with the deaths of two women in their 80s (initially reported as a woman and a man) confirmed on Tuesday.

There are 169 COVID-19 cases in NSW hospitals. They include 46 people in intensive care, 19 of them on ventilation.

“You have to assume the more people who get the virus the more deaths we will have,” Brad Hazzard said.

His comments came as State Premier Gladys Berejiklian revealed that the epicentre of the deadly outbreak had shifted to western Sydney.

“We ask for populations in the Canterbury-Bankstown area, in the Liverpool area, in the Cumberland community in particular, and also the Parramatta council area, to make sure that they’re vigilant, they’re coming forward to get tested, and you’re not leaving the house unless you absolutely have to,” Ms Berejiklian said.

“I really want to stress that point. But in addition to following the health rules and the health orders, can we ask everybody to come forward and get vaccinated if you haven’t had the vaccine.”

State health officials also revealed the virus had made its way into Liverpool Hospital and flagged the Campsie Centre shopping mall as an area of particular concern.

Authorities have confirmed that several positive cases of COVID-19 had visited the shopping centre. Anyone who has been to the mall between July 14-July 21 has been asked immediately get tested and isolate for 14 days regardless of the result.

Dr McAnulty said the nurses worked last week in the geriatric and vascular wards and the affected patients had been placed into isolation.

Of Tuesday’s 172 locally acquired cases, 85 were linked to a known case or cluster, including 66 household contacts and 19 close contacts.

The source of infection for 87 cases remains under investigation.

In a continuation of one of the most concerning trends for NSW, only 61 were in isolation throughout their infectious period.

A further 79 were in the community for at least part of their infectious period, while the isolation status of 32 is yet to be determined.

“They’re the issues we need to focus in on,” she said.

“But it’s also clear for us that we need to intensify our strategy to ensure that the population comes forward to get vaccinated.”

The new cases were picked up from 84,486 COVID-19 tests in NSW to 8pm Monday, with the state administering 24,859 vaccines in that timeframe.

Despite another day of triple-digit cases, Ms Berejkilian refused to confirm that the lockdown would extended beyond its scheduled end-date on July 30.

The Premier pushed back against reporters pressing for an announcement and said NSW residents would rather wait until the government was in a position to release a detailed plan for the easing of restrictions.

“I’m hoping to make those announcements as early as tomorrow,” she said.

Soon after, however, NSW Health revealed that stay-at-home orders in the Orange City Council, Blayney Shire Council, and Cabonne Shire Council areas would end as planned at 12.01am on Wednesday.

And in other positive news, Ms Berejiklian – who described the strategy of restrictions and vaccines as “our recipe for freedom” – announced the state would open up its vaccination hubs to younger adults wanting the AstraZeneca shot from Friday.

All adults will be able to book a vaccine at a state-run hub from that date regardless of their age.

“This is positive news in line with the health advice, so I’m asking everybody to come forward and get the vaccine,” Ms Berejiklian said.

“We know the vaccine protects against serious illness, but also reduces how contagious you are. And that is really critical moving forward.”