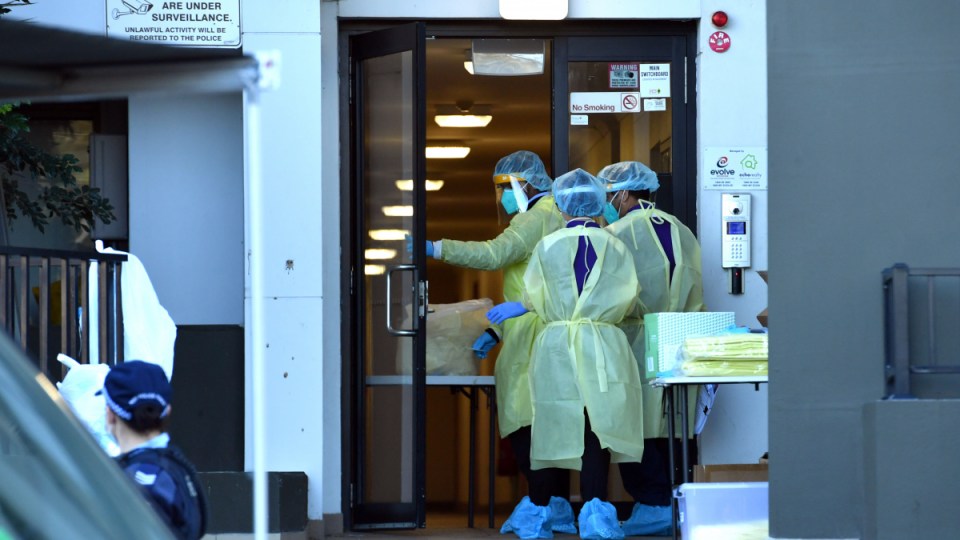 A five-storey apartment block in Blacktown has been plunged into lockdown after multiple residents were diagnosed with COVID-19. Photo: AAP

New South Wales has reported 172 new locally acquired cases of COVID-19 and two virus-related deaths over the 24 hours to 8pm on Monday.

Two woman in their 80s died after contracting the virus including a woman from Pendle Hill who caught it at a funeral to mourn the loss of a relative whose death was unrelated to COVID.

The two deaths were announced yesterday and the latest batch of cases – the highest daily number since the outbreak began in June – brings the total number linked to the current outbreak to 2397.

Despite another day of triple-digit cases, State Premier Gladys Berejiklian refused to confirm that the lockdown would be extended for weeks beyond its scheduled end-date on July 30 but made it clear that restrictions were unlikely to be eased.

“I’m hoping to make those announcements as early as tomorrow,” she told reporters on Tuesday.

“What I’ve said based on the health advice is that we need to get the number of people infectious in the community as close to zero as we can before we open up.”

Ms Berejiklian said essential workplaces and households remain the two key sources of transmission but hit back at suggestions that her language and restrictions were too weak to engender sufficient compliance.

The Premier later called on all residents to do their bit by following the rules and protecting those around them.

“I just urge everyone to remain vigilant,” she said.

“Please don’t let your guard down.”

Of the 172 new locally acquired cases, 85 are linked to a known case or cluster, including 66 household contacts and 19 close contacts.

The source of infection for 87 cases is still under investigation.

Sixty cases were infectious in the community and the isolation status of 32 cases remains under investigation.

Sadly, 169 cases are in hospital including 46 people in intensive care and 19 requiring ventilation.

The new cases were picked up from 84,486 COVID-19 tests reported to 8pm last night, with the state administering 24,859 vaccines over that same timeframe.

Ms Berejiklian said Western Sydney had displaced southwest Sydney as the main source of concern regarding transmission of the virus.

NSW health official Dr Jeremy McAnulty added there had also been an outbreak at Liverpool Hospital, which had so far infected eight patients, two nurses and a student nurse.

Dr McAnulty said the nurses worked last week in the geriatric and vascular wards and the affected patients had been isolated.

He also flagged Campsie Centre shopping mall as a key area of concern.

The venue was visited by confirmed cases of COVID-19 who are known to have transmitted the virus to other people. Anyone who visited the mall on any day between July 14 and July 21 should immediately get tested and isolate for 14 days regardless of the result.

Although the lockdown will almost certainly be extended for the majority of NSW residents, Ms Berjiklian said it could end tonight for people living in the Orange, Blayney and Cabonne local government areas.

“The health advice is very promising in that regard, there’ll be a message sent out later today,” she said.

“The community can look forward to positive news in that regard.”