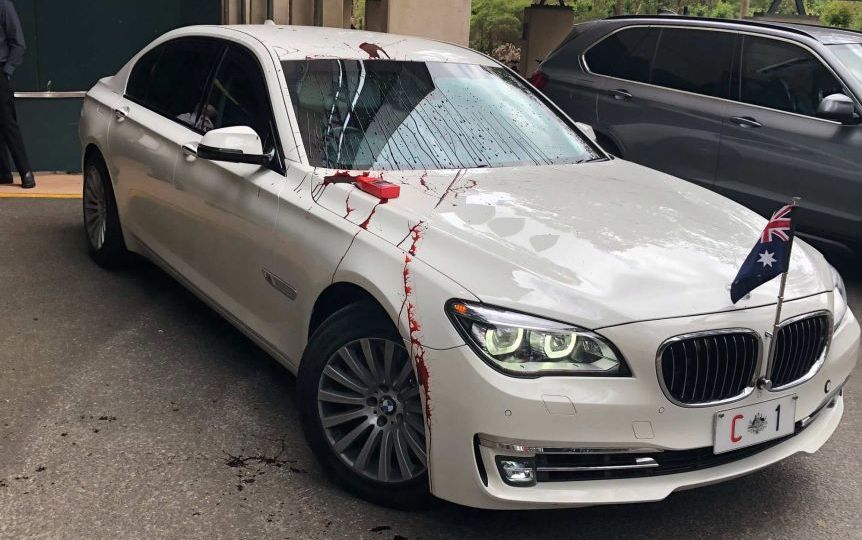 Lancaster was among a group who spattered the PM's car with paint and pelted it with brussels sprouts and tomatoes. Photo: Twitter/Drew Pavlou

A university student has admitted throwing red paint, brussels sprouts and tomatoes at Prime Minister Scott Morrison’s car during a protest at a university research centre.

Sharai Elizabeth Lancaster was charged with wilful damage, common assault and public nuisance over the incident which occurred when Mr Morrison visited Queensland during the state election campaign on October 12, 2020.

Mr Morrison was supposed to greet people before taking a tour of the University of Queensland’s COVID-19 vaccine lab, but instead moved inside due to the action about refugees in detention.

The 23-year-old and other protesters splashed red paint on the glass doors of the university building before smearing it with their hands, Brisbane Magistrates Court heard on Monday.

Some red liquid landed on a university security officer who tried to stop her.

Lancaster also squeezed red paint from a bottle onto the windscreen and bonnet of Mr Morrison’s car before smearing it all over the vehicle.

She was also among protesters who threw brussels sprouts and tomatoes at the car.

Mr Morrison had to be “exited” from the building, as the “aggressive and angry” protesters got into the foyer, using a megaphone to make loud siren noises, the court was told.

Lancaster was ordered to serve 60 hours of community service.