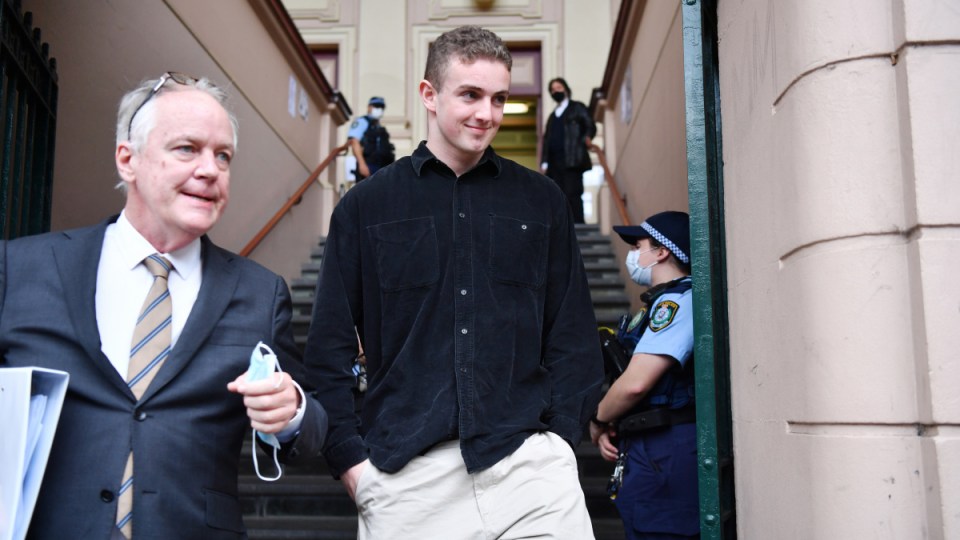 Kristo Langker (right) wants to be tried by jury on charges he intimidated the NSW Deputy Premier. Photo: AAP

A YouTube entertainer’s producer wants to be tried by jury on charges he intimidated NSW Deputy Premier John Barilaro, a court has been told.

Kristo Langker, 21, was arrested and charged on June 4 after an investigation by the NSW Police Fixated Persons Investigation Unit into alleged stalking.

The arrest was the latest in an unfolding spat between the Friendlyjordies channel and the deputy premier, who is suing the channel’s star Jordan Shanks-Markovina for defamation.

Mr Langker wants his case to be handled by the Office of the Director of Public Prosecutions and for there to be a jury trial, “if it progresses that far”, barrister Emmanuel Kerkyasharian told Newtown Local Court on Thursday.

Pleas of not guilty to both charges were entered.

While some bail conditions on Mr Langker were lifted or relaxed, magistrate Glenn Bartley declined to settle a dispute over Langker’s want to go past NSW Parliament House.

Under the new conditions, Mr Langker cannot go within 100 metres of any place Mr Barilaro works.

But Mr Langker wanted the ability to pass by to head to the Sydney Conservatorium of Music.

The magistrate refused to hold a bail hearing saying his court was too busy and that MrLangker’s lawyers served evidence too late.

“He’s not in jail, he can walk around,” he said, adjourning the “residual bail matter” to Downing Centre Local Court on Wednesday.

Outside court, Mr Langker’s solicitor celebrated the end of a gag order on his client, who now “has a free mouth, not that he’ll use it”.

“We intend to fight them as high, as harsh and as vigorously as possible,” Mark Davis told reporters.

“He’s an innocent man, we’ve yet to see any evidence at all beyond a general police statement about the offence.

“We’re extremely confident in the evidence that we’ve now gathered and we’re looking forward with enthusiasm to our day in court.”

Asked why he didn’t like the Deputy Premier, Mr Langker said it wasn’t about liking Mr Barilaro.

“I did stories on him … (including one) that the Sydney Morning Herald picked up on. It’s not about liking him, it’s about holding him to account.”