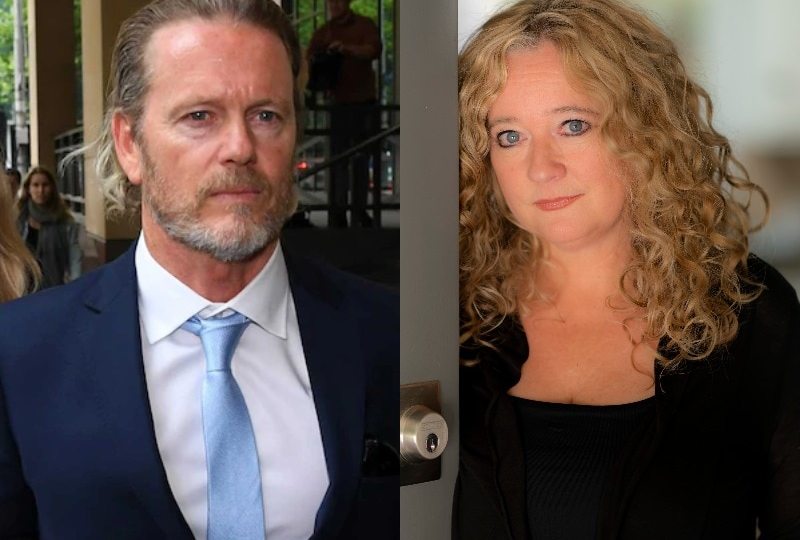 A former British television star has accused actor Craig McLachlan of groping her live on air when he was a guest on her popular children’s show in 1990.

McLachlan says the claim is “false, uncorroborated and never the subject of a complaint”.

Jeanne Downs was the face of Children’s ITV, a British free-to-air children’s television channel later known as CITV, between 1989 and 1991.

In May 1990, McLachlan was a guest on her show, which was watched by millions of children across Britain.

At the time, 24-year-old McLachlan had starred in Australian soap operas Neighbours and Home and Away and had a hit single Mona with his band Check 1-2.

Ms Downs, then 23, had been in what she has described as her “dream job” for about a year.

The pair were live on air for about two hours, with segments before and after each of the scheduled programs.

Footage shows McLachlan and Ms Downs were seated closely next to each other, to fit into a single camera shot.

“Partway through the show, we were all in mid-conversation live on air,” Ms Downs said.

“Suddenly, Craig forced his hand right under my bottom and pushed hard into my private middle area. I was wearing black leggings which were made of fairly thin material. The strong action of his hand under my bottom was very much felt intimately.

“It was only for a second or two and I almost let out a shriek, but I was on live TV and could not do or say anything – this is children’s TV and I had millions of little kids watching me.

“It was totally out of the blue and I was so shocked and stunned.

“I turned to him, still speaking, and I feel sure I had a weird, puzzled look, being pretty stunned at what just happened. Craig didn’t flinch and just carried on as normal, as though nothing had happened.

“I was so overwhelmingly shocked, disappointed, angry, violated, devastated, sad and actually physically hurt as his hand and his fingers were so strong. I fought hard to hold back tears, my body was shaking, convulsing inside.

“I had to carry on and remain professional. It was the only thing I could do.”

Ms Downs said she just “shut down” and could not wait for the interview to be over.

After the show, Ms Downs said the crew and staff said their goodbyes and McLachlan left.

“I just wanted to never see his face again. Craig McLachlan went off, back to his celebrity status, adoring public and further rounds of TV appearances,” she said.

“It was a moment in my life I will never forget and to this day I feel sick when I replay it in my mind.

“What I find unfathomable is that he was such a big star at the time … So why behave like that, not only putting your whole career in the balance but doing something that was fundamentally wrong, inappropriate and unacceptable?”

Ms Downs said she did not say anything to McLachlan because he left the studio as soon as the show was over and she was in shock. And she did not complain to Children’s ITV because she felt he was a much bigger star than her and she was concerned it might end her career.

“I was frightened to complain, I’d been in the job a short while and I just didn’t want to blow anything,” she said.

“Over the years, I have mentioned it to a few people but at the time I thought best keep my mouth shut. He’s a really big star. What are they going to say? ‘Who cares? He’s groped you, he’s touched your bottom.'”

Ms Downs said she told her husband soon after they met in 1992, an acting friend in 2011 and another friend in 2017, just after the Harvey Weinstein story broke. The ABC has spoken to these three people and verified that Ms Downs disclosed the alleged incident to them.

‘I bet you that’s Craig McLachlan’

In January 2018, the ABC and Fairfax Media (now Nine newspapers) published a joint investigation into claims that Mr McLachlan sexually harassed his female co-stars during the 2014 stage production of the Rocky Horror Show.

Three actresses told the ABC he indecently touched and sexually harassed them on and off stage.

Ms Downs said she and her husband were listening to the radio one night when the announcer said an Australian soap star was facing sexual harassment allegations.

“I sat bolt upright in bed and I said, ‘I bet you that’s Craig McLachlan. I bet you he’s done it again’.”

Ms Downs said she contacted two newspapers, The Daily Mail in Australia and Sunday Mirror in Britain to tell her story. But she changed her mind when they declined her request to remain anonymous.

She said she felt uncomfortable when the Sunday Mirror offered payment for her story, which “didn’t feel right”.

In a statement to the ABC, McLachlan’s lawyer said: “In January 2018 [the allegation] was vehemently denied when raised by the UK Sunday Mirror and not subsequently published.”

McLachlan is suing the ABC, Nine newspapers and one of his Rocky Horror Show co-stars for defamation.

Ms Downs said when she read about the case, she contacted lawyers for the media outlets, offering to testify about her experience.

But the NSW Supreme Court struck out her account, ruling the alleged incident was “too remote” from the media publications about McLachlan’s conduct during the 2014 tour of the Rocky Horror Show.

The statement from McLachlan’s lawyer pointed to that ruling: “As you are well aware, in December 2018 [the allegation] was struck out of the ABC-amended defence in the pending defamation proceedings, by court order.

“It is apparent that your intention is once again to smear my client by the broadcast of a ‘fresh’ allegation.”

The defamation case was put on hold when Victoria Police charged McLachlan with indecent and common assault charges relating to his alleged conduct towards four female co-stars on the Rocky Horror Show.

In December 2020, magistrate Belinda Wallington found him not guilty of all charges. Ms Wallington said she accepted most of the complainants’ evidence, saying they were “brave and honest witnesses who had not colluded and were not motivated by career ambition”.

But Ms Wallington could not be satisfied that McLachlan knew that the women were not consenting to his actions. Therefore, under the law as it applied in 2014, she could not find him criminally liable.

“The laws have since changed but do not apply retroactively,” Ms Wallington said.

“The law on consent has been replaced with a more objective test: was the accused’s belief reasonable?

“Were the current law applicable, it is possible that the result may be different.”

In a recent, paid television interview aired on Channel 7, McLachlan accused his female co-stars of fabricating their claims because they were jealous of his success.

Ms Downs said that interview was the catalyst for her to speak out publicly, under her own name.

“I need to show my belief and support to all the victims in both cases (criminal and defamation) and to those who are not involved directly with the cases but have bravely come forward to share their experiences with Mr McLachlan,” she said.

“This did happen to me and whatever your conclusion, I can assure you it is my truth and I have absolutely no reason to lie.

“I don’t really need to come forward and tell my story, as seemingly there are enough witnesses and victims who have had far more traumatising experiences with Craig McLachlan than me. So why should I do this? You know inside when you just have to speak up and do the right thing.”

Ms Downs is now the 10th person, from four different stage and screen productions, to allege that McLachlan sexually harassed or bullied them.

They include five actresses and one actor from the 2014 production of Rocky Horror Show, two actresses from the TV series Dr Blake Mysteries and a runner on the TV show City Homicide.