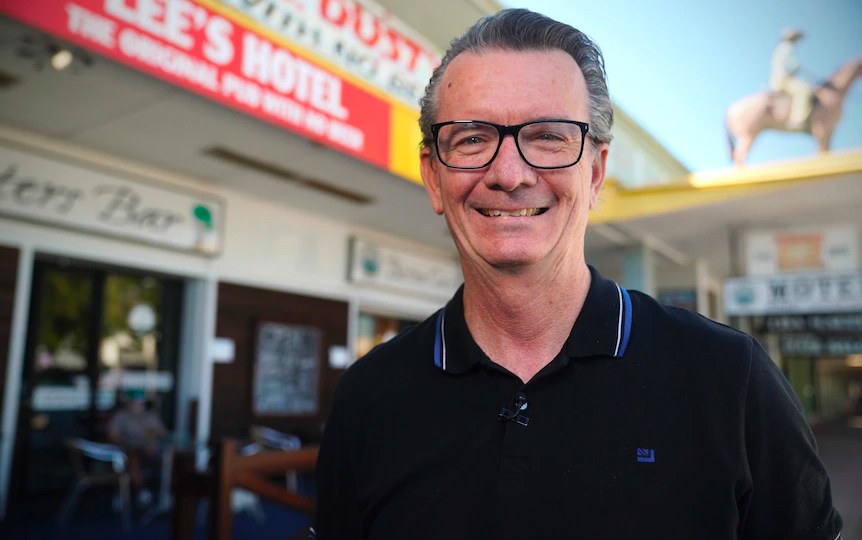 Glenn Connell says there's been interest from foreign investors, but he is keen for the Ingham pub to stay in local hands. Photo: ABC News

It was the inspiration behind a popular Australian country music song — and now the original Pub With No Beer from Slim Dusty’s classic is up for sale.

It’s being sold freehold for the first time in 50 years, with a price tag of $3.5 million.

Current owner and publican Glenn Connell said the pub, in Ingham in North Queensland, was a priceless piece of Aussie history.

“It is a custodian position to keep it all rolling. That’s what we do and what the hotel’s about,” Mr Connell said.

According to the vendor, the pub now comes fully stocked and there’s even a sign out the front, promising that the pub is “guaranteed to never run out of beer again”.

Travellers from around Australia visit the bar to hear about the tragic tale of a country pub running out of the cold stuff, and to check for themselves whether the taps are still running dry.

It was thirsty soldiers who drank the joint dry back during World War II, with the late country music legend Slim Dusty later turning the pub into an Aussie icon.

“In 1943, the Americans were moving north to secure against the Japanese,” Mr Connell said.

“They arrived at 2 in the morning to the hotel and woke the publican up.”

Pubs operated under a rationing scheme at the time, so it was a double blow for locals.

The story was recorded by Ingham farmer Dan Sheahan, who rode 20 kilometres on horseback the next day to the Lee’s Hotel, hoping for a cold pint, only to be offered a measly glass of red wine instead.

He wrote a poem detailing his lament.

“Kind of like the Tripadvisor of the day,” Mr Connell said.

It was that poem that country music great Slim Dusty turned into his hit song in 1962.

Over the years, the Lee’s Hotel has had a few facelifts but it still attracts the same clientele, including cane cutters from the surrounding region, many of them immigrants.

One of the locals, Rein, was born in Estonia and began work on the North Queensland canefields as a teenager.

“I was cutting cane when I was 19 and I was drinking in this pub all the time,” he said. “This is my watering hole”.

Mr Connell said there have been plenty of interested buyers, including foreign investors.

Ideally, though, he’d like a local – perhaps a descendant of Dan Sheahan or of Slim Dusty – to take over the pub.

Original Pub With No Beer for sale, now with plenty of amber liquid