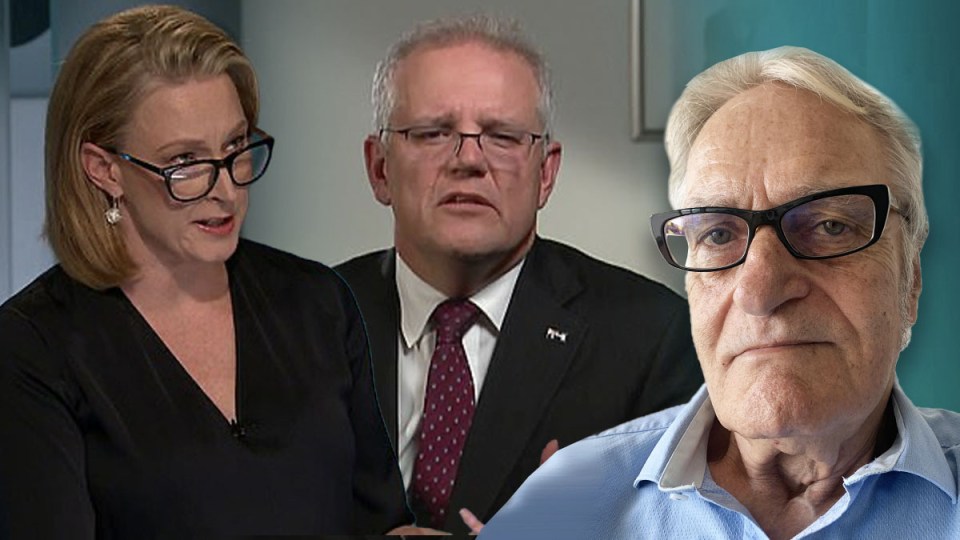 The next federal election is likely to take place on October 9, argues Dennis Atkins. Photo: TND

At the end of the blistering interview between Leigh Sales and Scott Morrison this week, the 7.30 host laid out a familiar litany of misdeeds and missteps by the Prime Minister during his three years in the job.

“When it comes to taking responsibility, [the public has] seen the vaccine stumbles, not your fault, it’s a supply issue. Quarantine, that is mostly problem for states. Bushfires, I don’t hold a hose. Brittany Higgins, I was in the dark,” Sales said.

“COVID deaths in aged care, mostly the fault of state governments for not controlling virus spread. Christian Porter, don’t need to drill into the particulars. Minister’s breaching standards, I reject that anybody ever has.”

Sales wanted to know if all this adds up to shifting blame and ducking responsibility.

It’s easy to see why Morrison goes on 2GB breakfast radio a few times a month, but hadn’t been on the ABC flagship TV show since last October.

Morrison rejected Sales’ list as a “narrative” he didn’t accept.

He had his own narrative, which is Canberra Bubble speak for spin.

“Australia is in a position, and living in a way, that the rest of the world is not.”

Morrison offered his own boastful list, starting with his often repeated recall of staring into the abyss Australia faced as the COVID pandemic swept through communities and economies 14 months ago.

Put a ring around October 9

After saying Australia was the envy of the world, the Prime Minister delivered what will be his political shield and spear all the way through to the election later this year.

“We’re going to keep on with that job (we’ve been doing) and that’s why (the) budget was the plan to ensure we continue to secure Australia’s recovery,” said Morrison.

Take note of it and get used to it. This is the script for election 2021 – and it will be an election later this year, most probably just a week after the NRL grand final. Put a ring around Saturday, October 9.

There’s always an outside chance the election will be delayed if unforeseen events arise, but it’s been widely felt since last spring the Morrison government has been working to a plan for an election at the beginning of the last quarter of 2021.

There’s was plenty of spin from the Prime Minister’s office late last year, and it doubled in February this year, seeking to paint Morrison as a “full-termer” who would be holding off asking for elections until April or May, 2022.

This was primarily about dampening down public speculation causing disquiet among those quiet Australians who don’t like being taken for fools.

At the height of public disgust and frustration over how a series of crises and controversies concerning the treatment of women were being handled, “Plan B” looked like being shifted to the front of the playbook.

The public’s anger seems to have subsided but these events damaged Morrison’s standing – and rekindled the deep resentment to his most famous failed turn of phrase, “I don’t hold a hose”.

Morrison is headed for an October poll for a few key reasons and the overhyped 2021 Budget is tangential to it all. There might be a “bounce” from this death of debt-and-deficit document, but don’t go selling your Bitcoins to bet on it.

The politics behind a 2021 election

The top-line imperative driving the political decision to go in October is whether the still glowing ‘thanks for handling COVID’ effect might have a shelf life with an early 2022 use-by date.

Right now Morrison is getting a dividend from the way the government handled the health and economic shocks of the last 15 months, but this could fade as space grows between the original onset of the crisis and any destiny at the ballot box.

Other factors will be whether the international economy hinders our recovery, whether there are any pandemic risks from within or beyond our shores, calculating the risks of too many parliamentary sitting weeks, and the growing chance the public is going to see through one too many of Morrison’s marketing stunts and cliches.

The immediate post-Budget polls will begin rolling out over the next few days and will be studied closely. A new study from the Australian National University’s Centre for Social and Research Methods might already be giving Morrison and his team some pause for thought.

While Morrison can have an election for the full House and half the Senate as early as August 7, that becomes deeply problematic because the Western Australian redistribution will not be finalised until August 2.

The new boundaries will have to be sent to the Speaker and go through the official processes (just as the Victorian redistribution will be finalised by the end of July) before an election can be called. This would throw the possible date for a poll into the month of September but the footy finals in NRL and AFL territory could make such a schedule unattractive.

The grand finals are September 25 for Aussie Rules and October 3 for League, making any probable voting date beyond those weeks. That’s why October 9 is the day to mark down.

Dennis Atkins: We’re heading for an early election, and Scott Morrison has revealed his script