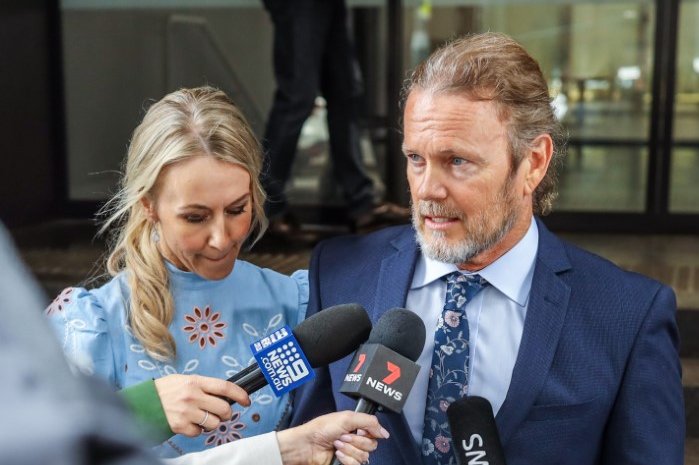 Three more actresses have accused actor Craig McLachlan of sexually harassing them on the set of The Doctor Blake Mysteries TV series and during the hit musical, The Rocky Horror Show, an explosive court document reveals.

The document, released to the ABC this week by the NSW Supreme Court, details fresh claims by actresses Tamzen Hayes and Anna Samson, who played opposite Mr McLachlan in The Doctor Blake Mysteries, and Teagan Wouters, who played Janet in The Rocky Horror Show.

It also alleges that Mr McLachlan bullied and intimidated actor Tim Maddren, who played the role of Brad in The Rocky Horror Show.

The revelations come on the eve of a Channel 7 documentary “Horror Show” featuring Mr McLachlan, in which the actor denies allegations that he sexually harassed another three female co-stars in the 2014 stage production of The Rocky Horror Show.

Mr McLachlan is suing the ABC, Fairfax (now part of Nine) and an actress for defamation over reports in 2018 that he indecently assaulted, harassed and bullied his fellow cast members during the 2014 tour of The Rocky Horror Show.

In an email to the ABC at the time, he strenuously denied all the allegations, saying: “Frankly, they seem to be simple inventions, perhaps made for financial reasons, perhaps to gain notoriety. In either event, they are to the best of my knowledge utterly and entirely false.”

Mr McLachlan also said at the time he never had any romantic interest in a female cast member and never made any unwanted advances to any cast members during the show.

The document released this week by the Supreme Court is the ABC’s defence to Mr McLachlan’s defamation claim. It reveals new allegations by actress Tamzen Hayes that Mr McLachlan sexually harassed her when she was playing the role of a corpse and gave her an unwanted, open-mouthed kiss during filming of season two of the Dr Blake Mysteries in 2014.

Anna Samson is an actress on Channel 7’s hit soap Home and Away. In 2014, Ms Samson filmed with Mr McLachlan for season three of Dr Blake Mysteries. In the court document, she alleges Mr McLachlan placed his hand on her buttock during a close-up scene and says she was so surprised that she forgot her lines.

The ABC’s defence document details further claims of a third actress, Teagan Wouters, who alleges that when she played Janet in The Rocky Horror Show, Mr McLachlan, who played the starring role of Frank-n-Furter, kissed down the front of her stomach during a bedroom scene and asked her for kisses in her dressing room.

Tamzen Hayes played the role of Virginia McKay in season two of Dr Blake in 2014 and was on set for three days of filming.

“On the first day of filming, Hayes was required to play a dead woman in a scene shot inside a room set up to look like a morgue,” the defence document says.

The defence document alleges that during the scene, Mr McLachlan continued to whisper further comments to the effect that Ms Hayes was beautiful.

“He also moved as if to tickle her. A member of the crew commented with words to the effect of ‘Come on Craig, we need to get this shot’. Hayes felt uncomfortable and a number of further takes were required to complete the scene as a result of McLachlan’s conduct.”

The defence document also alleges that in a different scene, Ms Hayes was required to stand on a ladder and take a painting off the wall. She was wearing a 1950s-style skirt. Mr McLachlan was not part of the scene and was asked to attend hair and makeup. Instead, he insisted on staying with Ms Hayes and holding the ladder, saying: “I’m going to hold the ladder.”

The defence document further alleges that at the end of three days of filming, Ms Hayes farewelled some of the cast and crew and left the studio to walk towards her car in the parking lot. Mr McLachlan, who was in the middle of shooting a scene, ran outside to follow her.

When he reached her, he said words to the effect of “I didn’t get to say goodbye to you properly”, held her face and started to kiss her with an open mouth.

“Hayes was in shock and did not know what to do. McLachlan pulled away a few seconds later when a crew member standing in the doorway yelled words to the effect of ‘Craig, we need you back on set’.”

The defence document alleges: “During one of her scenes with McLachlan, Samson and McLachlan were required to stand close together facing each other and engage in dialogue.”

“The scene started normally, however, when the camera moved in to film a close-up of Samson and McLachlan’s faces (that is, their bodies and hands could not be seen on screen) McLachlan placed his hand on one of Samson’s buttocks and performed the remainder of the close-up scene with Samson with his hand on one of her buttocks. This was not scripted or directed.

“Samson was so surprised by the incident … that she forgot her lines. The scene was shot again and McLachlan again placed his hand on one of her buttocks while she filmed the close-up portion of the scene.”

Ms Wouters played the role of Janet in the 2014 production of The Rocky Horror Show. She performed the role during the last seven weeks of the tour.

The defence document alleges: “On several occasions during the Janet bed scene while Wouters played the role of Janet and McLachlan played the role of Frank-n-Furter, McLachlan continued to kiss Wouters down the front of her stomach after he had disappeared under the covers was out of sight of the audience (when he was supposed to be hiding behind the bed covers but otherwise not kissing Janet).”

“McLachlan’s conduct in kissing Wouters down the stomach once out of sight of the audience was unnecessary for the performance of the Janet Bed Scene, was not scripted or directed.”

Under the heading ‘Sexual harassment of Wouters’, the document alleges that during the Melbourne leg of the tour, Mr McLachlan entered her dressing room and sat on the edge of a couch while Wouters sat at a dressing table.

“While seated on the edge of the couch, McLachlan repeatedly asked Wouters to kiss him by repeatedly tapping his finger on his lips and saying in a whiney tone words to the effect ‘Can I have a little kiss? Come on, just a little one’,” the statement says.

“Wouters initially tried to brush it off by jovially saying ‘don’t be silly’. After many requests from McLachlan, Wouters walked over to McLachlan and gave him a peck on the lips. Wouters did this to appease McLachlan so that he would stop asking her and leave.”

Mr Maddren decided to change the scene and not point his finger at the star. The document alleges Mr McLachlan was angry, kicked a rubbish bin and yelled the words, “You are a bunch of untalented and ungrateful c—-!”. Mr Maddren alleges he was asked to attend Mr McLachlan’s dressing room and the star told him: “If anyone had acted like you had on Doctor Blake, they would have been gone.”

The document also alleges that Mr McLachlan returned to the stage to perform the song Wild and Untamed Thing: “During that song, Mr McLachlan stood in the middle of the stage where two rows of the cast were attempting to cross each other in a choreographed move as if to obstruct their movement. This was not as scripted or directed.”

The defence document also details allegations that during the 2014 production of The Rocky Horror Show, Mr McLachlan twice groped the breasts of 24-year-old sound technician Sophie Norfolk while they were backstage. He is also alleged to have twice groped Ms Norfolk’s buttocks while backstage.

Ms Norfolk also alleges Mr McLachlan asked her to attend his dressing room during an interval to fix his microphone.

“Norfolk went to Mr McLachlan’s dressing room at the interval as requested and found McLachlan sitting on his chair naked. She did not fix his microphone and walked out of the dressing room,” the document says.

The document alleges in 2008, Mr McLachlan harassed 22-year-old Josie Steele who was working as a runner on the TV show City Homicide.

Ms Steele was asked to drive Mr McLachlan to Melbourne Airport at the end of a costume fitting at Southbank.

He allegedly called her a gorgeous woman and said: “I love 22-year-olds.”

McLachlan: Did you see my nipples getting hard?

McLachlan: I was hoping yours would be. Can we turn it up any higher?

When they arrived at the airport and Ms Steele pulled in to drop him off, he leaned over and kissed her on both cheeks, the statement said.

In December, a Melbourne magistrate found Mr McLachlan not guilty of seven indecent assault charges and six common assault charges relating to his alleged conduct towards four women while playing the starring role of Frank-n-Furter in The Rocky Horror Show.

While Magistrate Wallington said she accepted some of the complainants’ evidence, she said it did not meet the high criminal standards required to prove the charges. She described the four complainants as brave and honest witnesses who had not colluded and were not motivated by career ambition.

The defamation case was stayed pending the outcome of the criminal proceedings, and the witnesses have yet to give evidence about the allegations in the ABC’s defence.

In a statement of claim, filed to the court, Mr McLachlan alleges he was defamed by reports on the ABC in January 2018.

“The plaintiff has been greatly injured, his business, personal and professional reputation will be brought into public disrepute, odium, ridicule and contempt,” the statement says.

A hearing date has not been set.