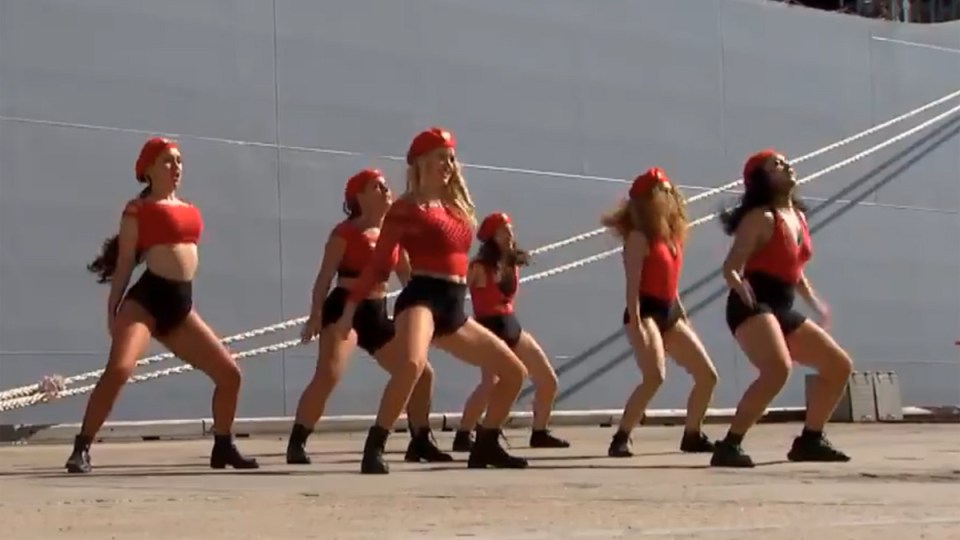 The dance troupe at last week's commissioning of a new Navy ship.

Assistant Defence Minister Andrew Hastie has told military personnel their “core business” will always be the “application of lethal violence” and warned “mission clarity” is vital to their work.

Mr Hastie, who was promoted to his frontbench role in 2020, outlined his vision for the defence force in a message to his West Australian constituents.

“Our military serves a vital role across Australian society, whether during pandemic, flood or fire,” Mr Hastie wrote in his most recent electorate newsletter.

“But the ADF’s core business will always be the application of lethal violence in the defence of our values, sovereignty and interests. We should never forget that.”

The Liberal MP, who entered federal parliament in 2015, previously served in the elite Special Air Service Regiment for five years, including deploying to the war in Afghanistan.

In his emailed newsletter, Mr Hastie argued that “mission clarity is vital in the profession of arms”.

“Without it, confusion grows – confusion about role, identity and purpose. And confusion is deadly on the battlefield, at sea or in an aerial dogfight,” he said.

“Mission focus is the foundation of victory. It keeps everyone driving towards a singular purpose.”

Inside government, there are frustrations over recent military decisions seen as too “politically correct”, such as a 2018 directive banning soldiers from wearing “death” symbols.

Concerns are also growing over the Defence Department’s ability to deliver on ambitious demands such as those set out in the multibillion-dollar Naval Shipbuilding Program.

Liberal backbencher Phillip Thompson, who is also a former soldier, said ministers Dutton and Hastie were making sure the ADF was focused on its main tasks.

“Having Minister Dutton at the helm and leading our Australian Defence Force, we’re bringing back our core values – we’ve gone a little bit woke over the past few years and we can’t afford to be doing that.”

The Queensland backbencher argued the ADF had lurched “too far to the left” with its social agenda in recent years.

“Our ADF shouldn’t be left or right, they should be straight down the middle of what their job is, and their job is to defend our nation, our interests, our values, our sovereignty, but also when we go on operations, have an unapologetic aggression and violence to get the mission done.”

“The whole point about banning stupid cartoon symbols in the defence force is to restore professionalism as a war fighting organisation,” he said.

“It’s not a case of political correctness, it’s a case of getting rid of a stupid young fashion that detracts from the professionalism.”

‘What would Horatio Nelson think of this s–tshow?’

One recent incident that caused annoyance inside federal government ranks was Navy’s decision last weekend to invite a local group of scantily clad dancers to perform a routine that included twerking.

“The dancers are beside the point – we’re meant to be a fighting force,” one government frontbencher told the ABC, speaking on the condition of anonymity.

“A question worth pondering: what would Horatio Nelson think of this s–tshow?”

The minister claimed, “many MPs have expressed surprise at this ceremony to government”.

Mr Thompson questioned the appropriateness of having dancers.

“Standards in the ADF, and definitely when commissioning a ship, should be a little bit higher than that,” he said.

“We’ve got the CDF, we’ve got members of Parliament there, and the Governor-General’s there, I don’t think it’s appropriate to be twerking”.

In 2019, when he was an LNP candidate, Mr Thompson apologised for a 2012 tirade on social media threatening to harm Muslims.