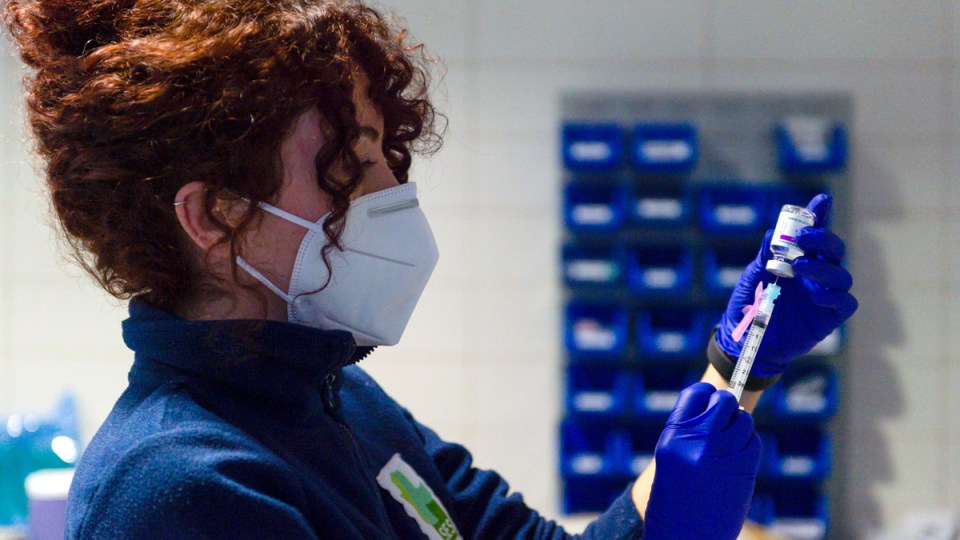 Doctors have urged the federal government to be more cautious in its promises of the coronavirus vaccination program.

On Tuesday morning, the LNP backbencher broke ranks with government colleagues, calling for the Therapeutic Goods Administration to be overruled, and for Australia to instead follow the lead of European countries that have stopped administering the shot after reports of blood clots in some recipients.

“I don’t believe the [Therapeutic Goods Administration] is infallible. I don’t think they’re the Vatican,” he said.

“I don’t have a lot of faith in the [World Health Organisation].”

But Coalition colleagues were quick to distance themselves from the senator on Tuesday, saying Australia’s vaccine rollout would go ahead as planned.

“There’s no evidence in Europe or Australia of causation or correlation,” Mr Hunt said.

“Not one European country has found causation.”

.@mattjcan is calling to pause Australia’s AstraZeneca/Oxford vaccine rollout after several European countries suspended use of the jab over reports of bleeding and blood clots #auspol pic.twitter.com/b8teh0KAnT

Mr Hunt batted away suggestions Australia’s virus vaccine rollout – the bulk of which will be the AstraZeneca shot – should be paused while safety concerns were explored.

Deputy Prime Minister and Nationals leader Michael McCormack said the Queensland senator’s comments “don’t represent my views”, nor that of the Morrison government.

“I would have preferred if he hadn’t actually said what he said,” he said.

“He’s entitled to his personal view but the government is getting on with making sure we’ve got the vaccine rollout.”

“I would encourage all members to be supporting the government in the rollout … not undermining it,” he said.

Australia’s chief medical officer Paul Kelly reaffirmed the Morrison government’s position, saying: “In this situation, I can absolutely say I remain confident in the AstraZeneca vaccine, that it’s safe and that there is, at this point, no evidence that it causes blood clots.”

Earlier, Treasurer Josh Frydenberg confirmed there were no plans to suspend Australia’s rollout of virus vaccines.

“Both the European equivalent of our TGA as well as the World Health Organisation have said that the AstraZeneca is effective,” he told ABC radio.

The jab has been widely used in Britain, where more than 11 million adults have been vaccinated, with no major issues.

But, after some European patients developed blood clots, countries including the Netherlands, Denmark and Norway halted its use. Germany, France and Italy have also stopped using the vaccine.

The TGA said on Saturday that “extensive international experience does not indicate an increased risk of blood clots associated with the vaccine. Blood clots can occur naturally and are not uncommon”.

The AstraZeneca vaccine is the bedrock of Australia’s vaccine rollout strategy, with the government securing 54 million doses. They include a million a week produced at CSL’s Melbourne plant, that will be available from next week.

It is the vaccine most Australians will receive.

“I wouldn’t take my medical advice from Matt Canavan,” she said.

“Labor has strong confidence in the ability of the Therapeutic Goods Administration to monitor any reports about potential adverse events, and to give appropriate advice to the Australian people and Australian governments,” he told TND.

“Please feel confidence in the vaccine, please, if you are offered it, take it, and remember that you’re helping many vulnerable people in the community if you are,” she told Channel Nine.

There is no proof the AstraZeneca vaccine causes blood clots.

Blood clots are a common condition, particularly among older people, who are the highest priority for the jab.

Out of the 17 million people across Europe who have received the vaccine, there have been just 15 cases of deep vein thrombosis and 22 of pulmonary embolism.

Other licensed COVID-19 vaccines have reported similar rates of clotting in patients who have been vaccinated, according to AstraZeneca.

The European Medicines Agency, TGA and the WHO all say there is no evidence of any link between the vaccine and blood clots.