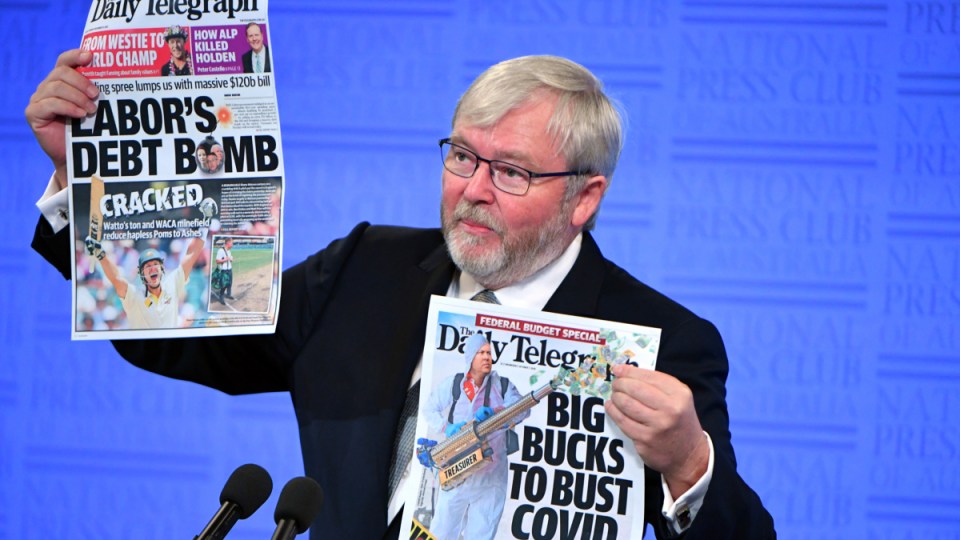 Former PM Kevin Rudd has renewed hostilities against News Corp in a fiery speech blasting the company and many who work for it.

Mr Rudd spoke about the “toxic culture” in Australia’s Parliament in a speech to the National Press Club in Canberra on Tuesday, criticising both News Corp and Prime Minister Scott Morrison.

“Let the sunshine in,” he said of the review of parliamentary workplace culture that is being led by Sex Discrimination Commissioner Kate Jenkins.

But Mr Rudd said he hoped there would also be inquiries into national media organisations and other corporations.

The former Labor leader – who has campaigned for a royal commission into the Murdoch media’s role Australia’s print media – said he was “sure my enemies in the Liberal party, the Labor party and the Murdoch party will be hard at work to find examples of harassment and assault among my staff during the period I was prime minister”.

But Mr Rudd said he was “not aware of any complaint about my own staff, my ministers or members”. He implied that he would be targeted in News Corp press for his NPC speech.

“Before they resurrect my drunken visit to a strip club while I was an MP, let me note that I was there as the guest of Rupert Murdoch’s right-hand man, Col Allan, although I have accepted full responsibility for being there – my choice,” he said.

“Perhaps News Corp, which harboured such notorious sexual predators as Roger Ailes, will tell us whether they’ve used nondisclosure clauses to keep quiet allegations of sexual harassment and assault within their corporation,” he said.

Mr Rudd was later asked by Greg Brown, a journalist with The Australian, whether his behaviour as Labor leader fell short of proper workplace standards.

Brown referred to comments by some of Mr Rudd’s colleagues about the way he had treated staff and the people around him when he was prime minister – although the allegations do not include claims of sexual misconduct.

“You’re here in order to do a political job on me,” Mr Rudd responded.

“That is what News Corporation does. You never go to the substance of the argument I’m making which is – do you have a monopoly on print media in this country? Yes or no?”

He added that Brown would “seek to divert the subject to anything that suits you rather than address the central question, which is the abuse of the Murdoch media monopoly power”.

But Mr Rudd also acknowledged that some people might have problems with his management style.

“None of us are perfect in this business and I certainly am not,” he said.

Mr Rudd said the judicial inquiry should be short in duration and “quite focused” in its terms of reference.

“I think that the appropriate course of action under these circumstances is for that to occur,” he said.

“I’m in no position to judge, nor is anybody else in this room, Porter’s innocence or guilt. That evidence is not available to us.”

But he said cabinet ministers, particularly “the first law officer of the Commonwealth” are subjected to a higher set of standards that those  determined by the criminal code.