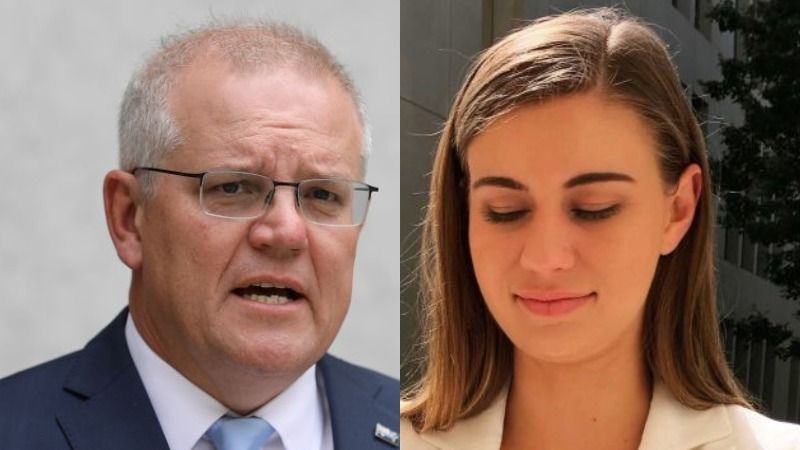 A fourth woman has come forward to allege she was sexually assaulted by the same political staffer accused of raping a colleague inside Parliament House.

The woman alleges the former Liberal Party staffer reached under the table to stroke her thigh at a Canberra bar in 2017.

She has filed a report at a police station in Canberra and will make a formal statement later this week.

The woman came forward to the ABC after Brittany Higgins alleged she was raped by the man in 2019.

Two other women – a Liberal staffer, and a former party volunteer – have also alleged they were sexually assaulted by him.

Ms Higgins was employed by Defence Minister Linda Reynolds at the time of the alleged assault.

Labor’s upper house leader Penny Wong said Senator Reynolds had questions to answer about how the complaint by Ms Higgins was handled.

“She was being treated as a political problem.”

“We know that at best, Mr Morrison runs a government where the culture is don’t ask, don’t tell when it comes to serious criminal allegation,” she said.

“At worst, Mr Morrison himself is part of the cover-up.”

Labor, the Greens and One Nation have accused the government of setting up whitewash inquiries in response to the allegations.

The alleged rape has sparked several inquiries into workplace culture in federal politics.

Mr Morrison has also endorsed an external complaints handling process for parliamentarians and their staff.

The Greens are calling on the government to set up an independent review into how Ms Higgins’ allegations were handled.

Ms Higgins initially chose not to pursue a police complaint, fearing her job would be on the line.

Cabinet Minister Simon Birmingham said in circumstances where somebody chose not to proceed with a police complaint, there was a balance to be struck by those who were informed of the allegations.

He said respecting the rights of individuals to make decisions needed to be weighed against the responsibility of others to pursue action.

But it also emerged on Monday that Senator Birmingham had declined to meet a former member of his own staff, despite knowing she had made serious allegations of sexual assault.

The revelations came after the former employee, Chelsey Potter, called for swift cultural and procedural change in Canberra, demanding “new robust, clear processes for complaints of bullying, sexual harassment and assault” in an opinion piece for InDaily on Monday.

“To be a woman in the Liberal Party – a woman like me – is to experience two sides of a coin,” she wrote.

“On one side, there is the public response. Politicians meet our claims with their doorstops and radio grabs, their exclamations of deep concern and distress.

“On the other, when the cameras are gone, the story blown over, we are left with nothing but isolation and silence.

“We’re made to feel like troublemakers, not team players, only good for an awkward glance at party events and whispers as we walk away.”

Ms Potter went public in The Sydney Morning Herald in July 2019 with an allegation she was sexually assaulted by a Liberal colleague, who was reported at the time to “strongly deny” the allegation.

Senator Birmingham confirmed to InDaily that the pair exchanged text messages on July 26, 2019 – days before the SMH article.

He acknowledged he told Ms Potter he could not meet her on a weekend they were both in Adelaide. Instead, he referred her to “professionals”, including the national 1800 Respect helpline.

“At no other point has Ms Potter raised these claims with me or anyone else in my office, or sought to discuss them with me,” he said.

Senator Birmingham said sexual harassment and assault were “completely unacceptable in all circumstances”.

“I share Ms Potter’s publicly stated wish to see cultural changes that help to prevent such incidents and improved handling practices,” he said..

Also on Monday, Labor MP Joel Fitzgibbon said the cultural problem was one for men – not women – to fix.

“Men have to understand that if they do these things the full force of the law will come down upon them,” he told the Seven Network.

Independent MP Zali Steggall has been contacted by former staffers with traumatic stories about their time in parliament.

“It is very important to come forward with your stories to make sure we draw a line in the sand and this place does not have these incidents and the perpetrators are brought to justice,” Ms Steggall said.

“That is the part that I’m most offended about, that we have alleged very serious crimes that have been committed that have not been properly investigated.”