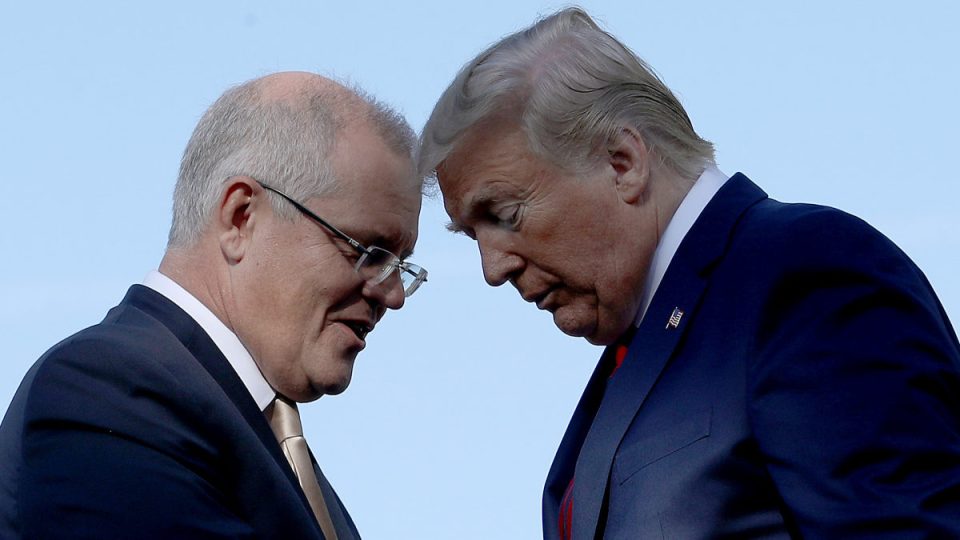 Labor leader Anthony Albanese says Prime Minister Scott Morrison has been too focused on becoming close to Donald Trump, which has hurt the US alliance. Photo: Getty

Scott Morrison has dismissed Labor’s accusation that he damaged Australia’s alliance with the United States through pandering to Donald Trump.

Opposition Leader Anthony Albanese believes the Prime Minister erred in failing to meet with any Democrats and appearing at a political rally with Mr Trump during a 2019 trip to America.

Mr Morrison said it was important for any Australian Prime Minister to work with the President, regardless of political differences.

“If people are going to have a crack at me because I worked with the President of the United States well I think that’s more on them than me,” he told 2GB radio on Wednesday.

Mr Albanese stepped up his attacks on the Morrison government’s management of the US alliance in a major foreign policy speech.

“Scott Morrison went too far – partly out of his affinity with Donald Trump, partly because of the political constituency they share,” he said in a speech at the University of Western Australia ahead of Joe Biden’s inauguration as President.

The Labor leader reiterated his criticism of Mr Morrison for failing to join other conservative world leaders in condemning Mr Trump over the deadly Capitol riot.

“He remains afraid of the far-right extremist fringe dwellers who make up the bedrock of his personal support – and who he cultivates through the avatars of Trumpists and conspiracy theorists like (Coalition MPs) Craig Kelly and George Christensen,” Mr Albanese said.

The Prime Minister has refused to directly name Mr Trump in his comments about the Capitol riot, which the president was impeached for inciting.

But Mr Morrison agreed the final months of the presidency distracted from other achievements in the US over the rest of the term.

“It has been very disturbing what we’ve seen, particularly around Capitol Hill. But it had been a year full of violence in many ways last year in the United States.”

He said he was confident America would bounce back from the extremes being experienced.

“Because that’s what you see on your television, you don’t see people in their normal towns and communities for most of the time. Just like here, you see the extremes on television.”

“Scott Morrison’s stubborn resistance to joining the global consensus on climate change has led to his government now being totally isolated on the international stage – frozen in time while the world warms around them,” he said.

“Let’s call this what it was: Mr Morrison pandering to president Trump and those who follow him in Australia.”

He signalled an elected Labor government would call for greater US engagement in Southeast Asia and push the Biden administration for clearer definition around competition with China.

“The arrival of the Biden administration presents an opportunity to expand alliance cooperation on the challenges before the world and our region,” he said.