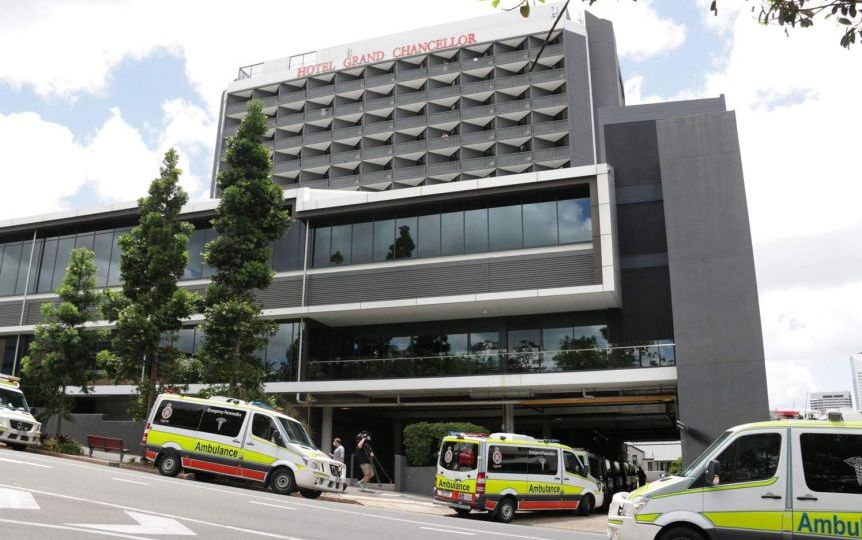 The threat from Brisbane's Hotel Grand Chancellor cluster appears to be over. Photo: ABC News

The Queensland government is set to ease coronavirus restrictions in Greater Brisbane on Friday, but News South Wales residents will wait at least another week.

Australia celebrated another day of no local COVID-19 transmission on Wednesday, with Queensland reporting two cases in travellers already in hotel quarantine for the 24 hours to 9am (AEDT).

As a result, Premier Annastacia Palaszczuk said restrictions like mandatory face masks in indoor public places and social distancing were “100 per cent” on track to be lifted at 1am on Friday.

“We’ve got one more day to go, it’s all looking very positive, and we’ll be able to advise the Greater Brisbane region tomorrow will be able to ease,” she told reporters.

NSW Premier Gladys Berejiklian, meanwhile, said her advice from  health experts was to wait another week.

“The best health advice is that we should wait another week before we ease restrictions. But I do want to assure the community that the government’s intention is to get as close to pre-Avalon [cluster] conditions as possible next week. That is what we’re aiming towards,” she said.

“As long as we can keep case numbers zero or confined to existing household contact, and as long as we have good rates of testing in the next week, there’s no reason why we can’t go back as closely as possible to pre-Avalon conditions, with the exception potentially of masks in some high-risk settings,” Ms Berejiklian said.

It was unclear if the three new Victorian cases were associated with the contingent in town ahead of the Australian Open, which begins on February 8.

Two unnamed players and another person connected to the tournament were among four new coronavirus cases reported in Victorian quarantine on Tuesday.

One was a woman in her 20s and the other two were men in their 30s.

A total of 72 players have been forced into 14 days of hard lockdown after being deemed close contacts of positive cases on three charter flights into Melbourne from Abu Dhabi, Doha and Los Angeles.

Victoria’s chief health officer Brett Sutton revealed two previously reported cases, a man in his 30s and another in his 50s, had been reclassified after evidence of previous infection.

That dropped the number of cases linked to the grand slam contingent to seven, with Victoria’s health department investigating if others can also be reclassified.

But the locked-down players are still unable to leave their hotel rooms for training, unlike their fellow competitors who arrived on flights with a clean bill of health.

In Queensland, Chief Health Officer Jeannette Young said despite the lack of new cases, there were still traces of the virus being picked up in sewage testing across the state.

Dr Young said it was understandable sewage testing had detected the disease on the Gold Coast, where virus cases are in hotel quarantine, and Cairns, where it’s believed a returned traveller is still shedding the virus.

However, she said a positive sewage testing result at Cannonvale in Mackay reinforced her call for people to keep coming forward to get tested.

The lack of new cases suggests that a cluster that emerged among staff and guests at the Grand Chancellor quarantine hotel in Brisbane, which triggered a three-day city-wide lockdown, has not spread any further.

Regardless, Ms Palaszczuk is still forging ahead with her proposal to move hotel quarantine out of Brisbane and into vacant outback mining camps to protect urban populations from the UK strain of coronavirus.

“The reason we’re putting this proposal forward is that we’re trying to minimise the risk with this incredibly infectious UK strain,” she said.
“This is not a problem unique to Queensland, it is an issue for all of Australia.

“I’m looking forward to speaking with the prime minister later on this week to put forward some suggestions and some ideas, and hopefully also, we’ll be raising it at national cabinet.”