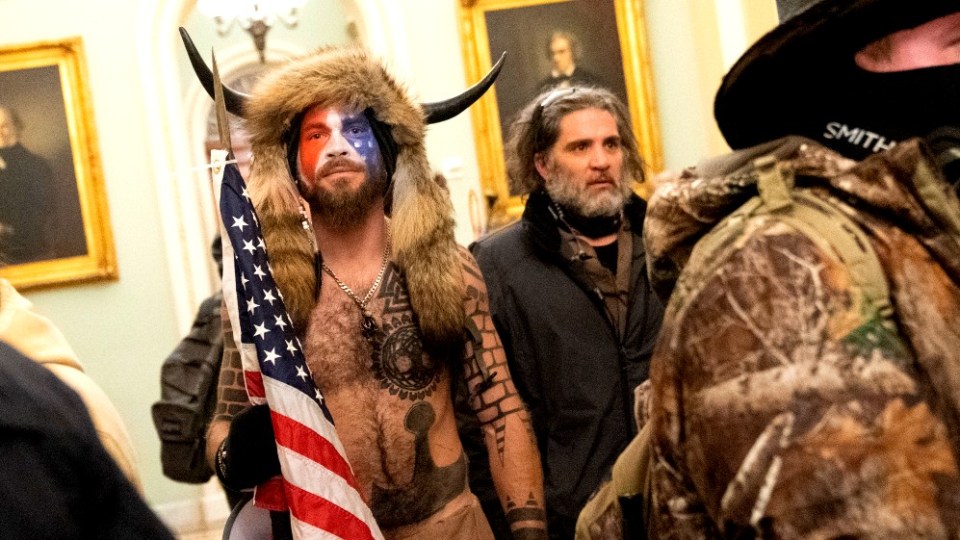 Home grown extremists in Australia have celebrated the riots at Capitol Hill amid warnings of the increased threat of far-right terrorism.

Australian-based users on social media sites including Facebook, Twitter, Reddit, and right-wing extremist-friendly Gab have spent the past week peddling conspiracy theories and celebrating the riots that killed five people.

One prominent white supremacist wrote: “King hit these f—-rs. Knock them out, drag them away. Keep doing this over and over, until all the shills shut the f–k up while the Men smash the enemy.”

The celebrations came as experts warn the far-right movement has become more visible and grown in membership since the pandemic started.

Human Rights Watch warned this week the scenes at Capitol Hill should come as a “wake up call” for the Australian government to counter the escalating right-wing terrorism threat.

Research has shown that extreme right-wing groups have grown in membership over the past year, with online spaces exploding with Australians looking to connect over their belief that white people are superior.

Dr Julian Droogan is an expert on violent extremism from Macquarie University who has spent countless hours observing these groups.

“It is a very diverse community, and online it is much bigger than the formal groups that exist,” Dr Droogan said.

The groups vary in beliefs and values – some concentrate their hate on Islam, Jews or feminists, while others home in on the LGBTI community or immigrants.

What binds them is a belief that the white race is under threat of extinction and an authoritarian leader is needed to save it.

They all come back to the idea that white identity is under threat and one of the ways it can be saved is through rolling back of democracy and the leadership of an authoritarian, preferably a white man,” Dr Droogan said.

Many believe that Donald Trump is the man for the job, he said.

One is that the groups normalise these beliefs and encourage violence to the point where “a man with a manifesto” becomes a terrorist actor, he said, referring to the Australian terrorist who perpetrated the Christchurch massacre after being radicalised online.

The second is that the groups’ extreme beliefs infiltrate mainstream discussions and decisions.

The much more insidious threat is a non-violent move into condoning racist anti-liberal beliefs in normal society,” Dr Droogan said.

“So the political discussion is moved to the proto-fascist right.”

Proto-fascism describes the ideas and cultural movements that lead to fascist governments.

“Fascists governments have never come to power purely through violent revolution. Before [violent actions] there are long periods where people agitated and moved their far-right beliefs into the mainstream,” Dr Droogan explained.

Australia’s domestic intelligence agency, ASIO, has already sounded the alarm, warning there is a “real and growing” threat posed by the far-right in Australia to the point that they now make up 40 per cent of ASIO investigations.

Just hours after rioters breached the Capitol building on Wednesday, Mr Kelly promoted via Facebook the conspiracy theory that anti-fascists – not Trump supporters, as was the reality – were behind the riots.

This conspiracy has also been taken up within parts of right-wing groups in Australia.

Dr Droogan said the government refusing to reprimand the two backbenchers was “dangerous”.

“In countries like America and Australia, you have political figures who try to flirt with these ideas, who try to appeal to the movement,” he said.

“But they hate all politicians. It’s not so much that they want conservatives or liberals elected, they distrust and hate elites altogether.

“So it is a dangerous thing to do because of the revolutionary nature of the movement.”

On Wednesday the Australian director at Human Rights Watch, Elaine Pearson, called for Australian authorities “to be vigilant” to the growing threat.

“The Australian government should speak plainly and consistently in condemning the actions of those who undermine democracy, even when it is the president of the United States,” she said.

PhD candidate at ANU Simon Copland is researching Australian extremism. He said the groups operating had already encouraged violence – but not in the way we might think.

“The Christchurch shooter, he wrote in his manifesto one of the reasons he did it was he was frustrated at the lack of progress in the movement here,” he said.

Yep, exactly. Mass police crackdowns and internet censorship can/will be used against the left just as much as the right. It's not right in either context. https://t.co/9RB5WtZEzd

Mr Copland said shutting down social media spaces wasn’t always the answer as it could move groups into more unregulated parts of the internet, where views become more extreme.

“It means law enforcement needs to be more targeted in extremist spaces, identifying participants within them and intervening beforehand.”

Dr Debra Smith, a Victoria University researcher focusing on violent political extremism, said there had been significant growth in right-wing extremism since 2015 when far-right groups protested the Bendigo Mosque project.

Dr Smith describes the movement as a “leaderless resistance”.

“They operate more like a network than a group,” she said.

It’s a balancing act, they need to be visible enough to attract members, but not so visible they attract security.”

Although no one can say how big the movement is, Dr Smith came across 100,000 unique users in Australian groups she studied.

Many of those would not be at risk of becoming violent, but the online spaces they frequent encourage it, she said.

“It enables it. It encourages it, and celebrates people committing acts of violence,” Dr Smith said.

A federal government committee has commenced an inquiry into the nature, magnitude, and the threat posed by extremism in Australia and how it has evolved during COVID-19.

But part of the answer has to be changing the political discussion to be intolerant of bigotry, Dr Smith said.

“Our political rhetoric needs to change,” she said.

We need to stop mainstreaming far-right views and making those people look like they just have another opinion.

“We need to see them for what they are which is peddlers of hate.”