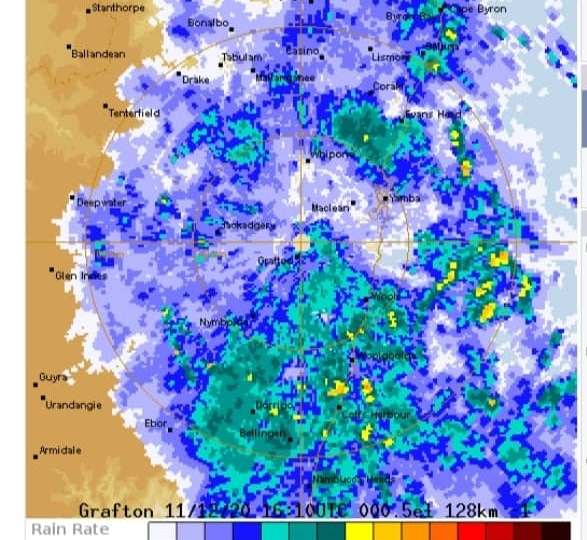 A massive band of weather hovered over southeast Queensland in the early hours of Saturday. Photo: BOM screenshot

Southeast Queensland is bracing for a wet weekend, with a month’s worth of rain to fall amid warnings of huge swell, the year’s highest tide and dangerous winds.

More than 200mm of rain is forecast for Brisbane and the Gold and Sunshine coasts from Saturday, the Bureau of Meteorology says.

Gale-force winds of up to 70km/hr, dangerous swells and surf and flooding are also likely, with the heaviest rain expected on Sunday.

“Damaging winds with gusts up to 90km/h are also possible.”

Rain is expected to ease on Saturday, with some showers and thunderstorms in the afternoon, before pouring down heavily on Sunday afternoon.

A severe weather warning for damaging winds, abnormally high tides and dangerous surf is in place from Fraser Island to the NSW border.

A strong wind warning has been issued for mariners from Mackay to the Gold Coast, with gales of up to 40 knots possible.

⚠️ #Flood Watch has been issued for #SEQld catchments from #FraserIsland to the #NSW border. Areas of heavy rainfall from Sunday are likely to produce river level rises above minor. Further updates here: https://t.co/JIjiAN35V0 pic.twitter.com/r6cS2L606P

Big swells up to 4.5m are expected and a flood watch alert is in place for low-lying areas.

“We could exceed the highest tide of the year by a metre,” Mr Lombard said.

“We’ll (likely) get storm surge from the big swell.”

Significant beach erosion in coastal areas is also possible into Tuesday when a new-moon king tide is forecast.

The 1000km-long and growing weather system moved east over the Great Dividing Range on Friday afternoon.

“The system is still amplifying. It hasn’t reached its maturity but it’s already coming across the Darling Downs,” meteorologist Livio Regano said.

“It’s maturing as it moves and will reach peak intensity on Sunday, and when that happens it will be sitting right on top of us.”

Queensland Parks and Wildlife urged people to reconsider plans to visit national parks in the state’s southeast during the wild weather.

There are significant risks to visitors from flooded creeks or falling trees.

“It’s not only visitors subject to these significant risks … it’s also emergency crews who may have to go out and try to rescue someone if they’ve got stuck because of a flooded creek or a tree comes down on them.”