Experts say that unless the federal government steps in to help, the crisis is going to push more Aussies into homelessness.

The data was revealed on Tuesday in the latest Rental Affordability Index (RAI), which shows the price of rents compared to household incomes based on new rental agreements.

The index is released every year by National Shelter, Bendigo and Adelaide Bank, SGS Economics & Planning and the Brotherhood of St Laurence.

Despite rentals becoming slightly cheaper in major cities this year due to the coronavirus pandemic, the latest data shows rent is still too expensive for about 689,000 Australians who were already relying on Newstart to survive.

If housing costs exceed 30 per cent of a low-income household’s gross income, then that household is classified by the RAI as experiencing housing stress.

Although the JobSeeker supplement has improved rental affordability for Newstart households nationwide, the reality is recipients are still facing moderate to extreme rental stress, the index shows.

“JobSeeker obviously improved their situation – they had twice as much money as they had previously – but they were still in housing stress, paying more than 30 per cent of their income on renting,” said Adrian Pisarski, the executive officer of National Shelter.

“It just goes to show how vital JobSeeker was, and how devastating it will be when it’s further reduced.”

The JobSeeker rate will be slashed by $100 a fortnight on January 1, leaving a single person with no children on just $357.50 a week.

The national poverty line, as defined by the Australian Council of Social Service, is $457 a week.

“With low interest rates, high unemployment and an increase of demand for affordable housing, this is the time to invest in social housing,” she said.

“And at the same time, people can be brought back into jobs.”

That’s not because the houses in Hobart are more expensive (hello, Sydney).

It’s mainly because there simply aren’t enough rentals in Hobart, as much of the supply was taken up by Airbnb and short-term rental markets, Mr Pisarski said.

Hobart’s average household income of $66,000 is also well below the national average of $85,000, making it harder for locals to afford rent.

Adelaide, where the average household income is $67,900, is ranked the second most expensive city for locals to rent.

“If you can work from home and you don’t have to be in Sydney, why would you be?” Mr Pisarski said.

It’s an idea that struck many city slickers when the pandemic shut down workplaces across the country.

Rather than enduring Sydney’s notorious traffic jams, plenty packed their bags and rented a house in a sleepy coastal town instead.

But the trend is making it harder for locals to snag their own place, especially in Queensland, shows the RAI. 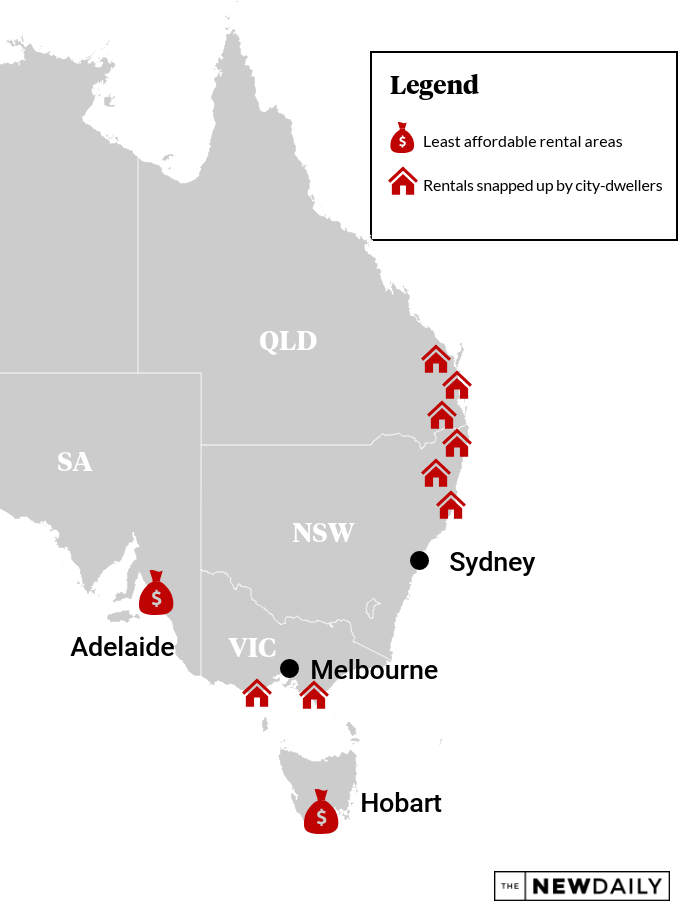 “We’re seeing in regional areas, places like the Sunshine Coast and even Mackay, Rockhampton and Toowoomba, there is huge demand for rentals and there just isn’t the supply in those markets.”

Rent still too costly for Aussies on Newstart, despite JobSeeker payments