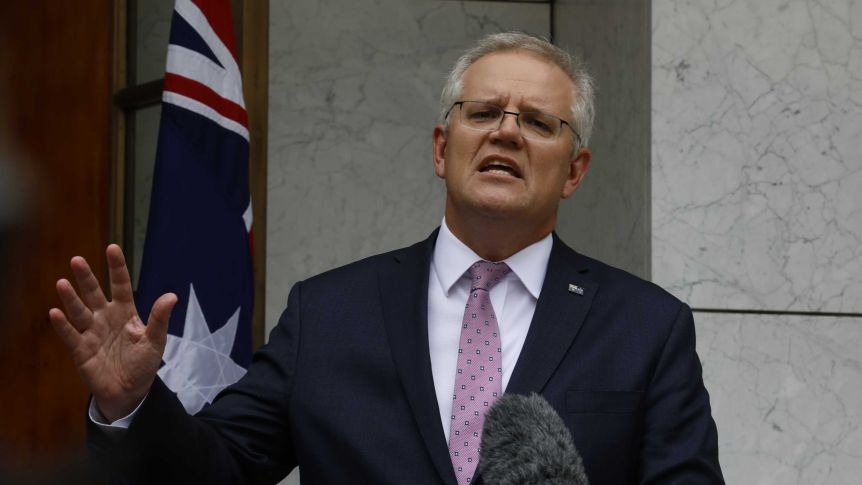 Scott Morrison says he hopes Australia doesn't need to use the credits but is keeping the prospect open. Photo: ABC News/Ian Cutmore

In an address to a private dinner hosted the Business Council of Australia, Mr Morrison said it was his ambition to “not need them” and this was a “goal” for the federal government.

“I’ve … said we will only use that carry-over … to the extent that it is required,” he said.

“Let me be very clear. My ambition, my government’s ambition, is that we will not need them.

“And we are working to this as our goal, consistent with our record of over-delivering in these areas.”

Australia’s current 2030 target under the Paris Agreement is to reduce emissions by 26 to 28 per cent compared to 2005 levels.

On current projections, that will only be achieved by continuing to claim “carry-over” credits from over-achieving on previous emissions reduction targets under the Paris Agreement’s predecessor, the Kyoto Protocol.

Whilst using carry-over credits is not explicitly banned under the rules of the Paris Agreement, most nations have declared they do not consider it valid to count emission reduced under the Kyoto Protocol towards future targets.

The federal government has found no support diplomatically from allies for its continued use of carry-over credits, which is particularly controversial as Australia was allowed to increase its emissions under the Kyoto Protocol because of the nation’s reliance on the resources sector.

The United Nations has encouraged all countries to present more ambitious emissions reduction plans at international climate change talks in Glasgow next year.

The federal government has so far resisted pressure to increase its 26 to 28 per cent target, instead announcing a “Technology Investment Roadmap” that focuses on backing a select few technologies and supporting heavy industry.

It has also declined to adopt a target of reaching net zero emissions by 2050, despite other major industrialised countries committing to the goal.

But Mr Morrison flagged his government would have more to say on emissions reduction policies in the next few weeks.

“I hope to have more to say about this before the end of the year as we update our emissions projections that will take into account new policies and measures,” he said.

Greens leader Adam Bandt said dropping the use of the carry-over credit “loophole” would be a positive step, but still insufficient.

“We’re in the critical decade and domestic political games will provide no cover for Australia’s climate-pariah status on the world stage.

“With Europe and the United Kingdom looking to cut pollution by well over half by 2030, and the United States having already agreed to cuts of 26-28 per cent on 2005 levels by 2025, five years earlier than Australia, we’re becoming increasingly isolated.”