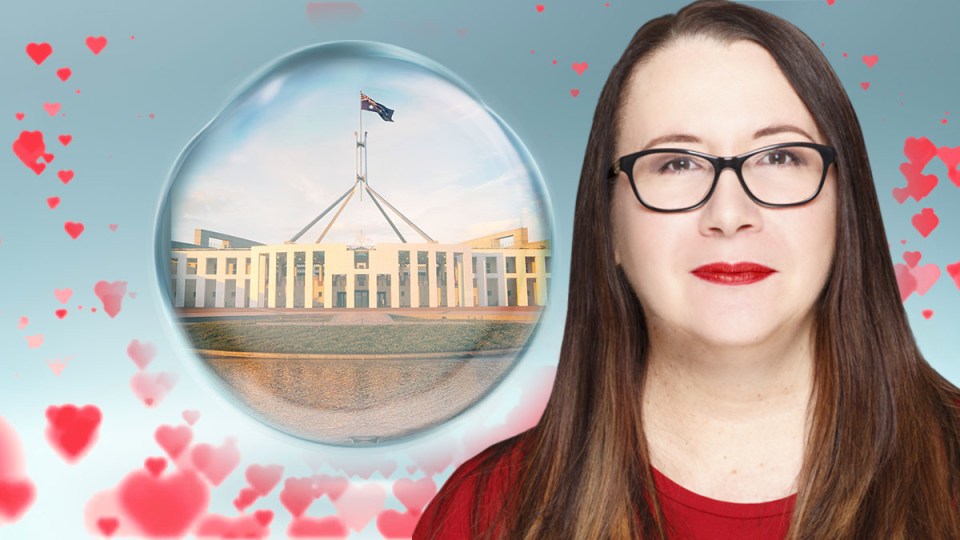 Paula Matthewson explains why what happens between the sheets in the Canberra ‘bubble’ isn’t always a private affair. Photo: AAP/TND

Pretty much anyone who’s worked in or around politics knows that the revelations made on Monday night’s Four Corners are not isolated incidents.

The tales of ministerial mistresses and bad behaviour are just a sample of the toxic male culture that taints some of the highest offices in the land.

Throw together a bunch of men and women in a high-stakes and high-stress working environment, subject them to long working hours together, isolated from their families, with alcohol-fuelled nights out as the preferred way of letting off steam, and it’s almost inevitable that sex between consenting adults will occur.

And occur it does – as the outgoing US President might say – A LOT!

But is it any of our business what politicians, staffers and yes, journalists, do in the privacy of their homes and hotel rooms?

Definitely not, says that bastion of family values, Barnaby Joyce, who claimed this week that former prime minister, Malcolm Turnbull, introduced a ban on ministers from having sexual relationships with their staff simply to remove him from the Nationals leadership.

Of course, Mr Joyce conveniently forgot to mention that it was the accusation of sexual harassment levelled against him by a highly respected woman in the rural community that sealed his fate, not Mr Turnbull’s ‘bonk ban’.

Ironically, Mr Joyce’s efforts to make the latest revelations about ministers’ extra-marital affairs all about how he was wronged when his affair went public, simply emphasise why it was right then – and now – to expose the behaviour.

Here are the main reasons why ministers’ (secret) private lives can sometimes be a public concern.

Risk of extortion or conflict of interest

Any person in a position of power with a secret, such as an affair, is at risk of being compromised with threats of the secret being exposed.

Public servants can be denied a security clearance if they are considered an extortion risk, but ministers are given access to classified information without having to get such clearance.

Some ‘unofficial’ relationships may also cause a conflict of interest if they have the potential to unduly influence a minister’s decisions.

A question of character

Then there’s the question of character.

To be clear, people who have affairs are not bad people. We’re all human, with human foibles, and there are probably many, many instances of married people finding new love in the workplace.

If they find joy and fulfilment in that relationship, then they are to be congratulated, not condemned.

However, there are a number of behavioural traits that those who ‘cheat’ on a more regular basis display. These include lying and other forms of deception, breaking vows and abusing trust. It can also involve breathtaking hypocrisy if a philanderer demands that others must uphold traditional family values.

Are these the qualities that voters want to see in the ministers who shape and deliver the laws that govern how the rest of society operates?

Perhaps we wouldn’t care – John F Kennedy and Bob Hawke are often cited as examples of notorious pants-men who were also good leaders.

The point is that the general public doesn’t know about most of this behaviour, principally because Australia’s defamation laws make it almost impossible to report on politicians’ affairs unless one of the people in the relationship goes public – as was the case with former Coalition media adviser Rachelle Miller in the Four Corners story.

Most importantly, it is right to (ban and) expose ministers’ affairs with staff because the behaviour involves a power imbalance that creates an unsafe workplace for women.

Yes, a consensual sexual relationship does involve two consenting adults. But when one of those adults has the power to hire or fire the other, the power in the relationship sits unevenly with the employer.

There are many untold stories of female staffers who’ve been shunted sideways or out of politics once a political affair has run out of steam.

As Four Corners reporter Louise Milligan tweeted on Monday, the expose was “for the women of Parliament, on the phone to me for 5 months. Women privately so frustrated, but who feel silenced and sidelined”.

The whistleblower on Four Corners, Rachelle Miller, is just one – brave enough to come forward with the details of her affair with a minister and the alleged behaviour of another.

Following the end of her affair with Minister Alan Tudge, Ms Miller was moved to another ministerial office, demoted, and then left politics altogether.

“I lost a lot of self confidence because I didn’t feel I had any power at all to be able to stand up for myself,” Ms Miller said. “This isn’t OK. The behaviour wasn’t OK, and the culture’s not OK, and there should be something done about it.”

The culture Ms Miller refers to is one that pervades Parliament House and is particularly dominant within the conservative elements of the Liberal and Nationals parties.

It’s also a culture that is incapable of producing policies that equitably support women.

That would be why staff at Parliament House still don’t have an adequate HR system and a safe way to report sexual harassment.

It’s been said before but bears repeating: The Coalition parties don’t have a women problem – they have a man problem.

If this week’s Four Corners is anything to go by, Coalition women have given up trying to reform from within and are now taking a very public route to cleaning up their party.

The women of Australia wish them every success in this endeavour.