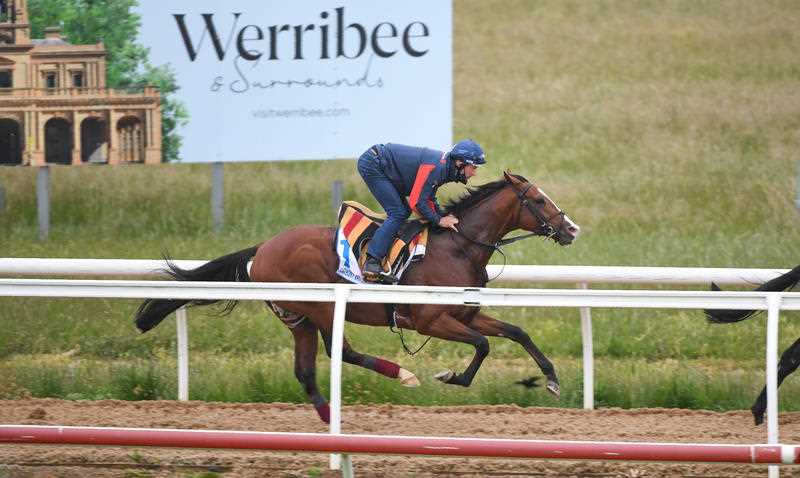 Anthony Van Dyck was euthanised after suffering an injury during the Melbourne Cup on Tuesday. Photo: AAP

High-profile favourite Anthony Van Dyck became the seventh horse in seven years to be euthanised after running in the Melbourne Cup.

And it’s a record that has animal welfare groups fuming.

The horse aiming to give trainer Aidan O’Brien his first Melbourne Cup victory was injured during the race that stops a nation.

“It is with sadness that we confirm that Anthony Van Dyck had to be humanely euthanised after sustaining a fractured fetlock during the running of the Melbourne Cup at Flemington,” Racing Victoria’s Jamie Stier said.

“The horse received immediate veterinary care, however he was unable to be saved due to the nature of the injury sustained.”

But it’s a common refrain in recent years, with Anthony Van Dyck becoming the sixth foreign horse killed during the race since 2013.

Irish horse The Cliffsofmoher, also owned by racing powerhouse Coolmore Stud and trained by Aidan O’Brien, died after breaking its shoulder in the 2018 edition of Melbourne’s most prestigious racing event.

Animal rights group PETA demanded an investigation into Anthony Van Dyck’s death as well as its veterinary records to be made public.

“While the industry focuses on the money made from animal suffering, glossing over the bleeding lungs, broken bones and death, the reality of the abusive racing industry is that horses are made to run to the detriment of their health,” PETA said.

“It’s no surprise that in just the last racing year, 116 horses died on Australian racecourses.”

The 2019 English Derby winner, Anthony Van Dyck was rated one of the best horses to be sent to Australia for a spring campaign and was on target to run well at Flemington after producing the run of the race when just beaten in the Caulfield Cup.

Victoria’s RSPCA branch said it was “deeply saddened” by the horse’s death but extended sympathies to those who cared for it.

“The immediate veterinary care and subsequent decision to euthanise the horse to avoid pain and suffering was paramount,” the group said.

“The RSPCA believes there are inherent animal welfare issues involved with horse racing.

“Whenever there is an adverse outcome for an animal, our expectation is that the industry will do a comprehensive review to identify ways to improve in an effort to avoid unnecessary injury or trauma in the future.”

Nick Williams, a part-owner of the winner Twilight Payment, said he was devastated to learn that Anthony Van Dyck couldn’t be saved.

“I want to send out all my sympathies to the team Coolmore,” he told Racing.com.

“They put a huge amount of money into our sport.

“They take their best horses everywhere in the world and they’ve had this bad luck with such a great horse Anthony Van Dyck today.

“I just feel terrible for them. It’s a shocking thing to happen at any time.”

Anthony Van Dyck raced 19 times in five countries and collected five other wins to go alongside his English Derby triumph.

Another year, another foreign horse dies in the Melbourne Cup