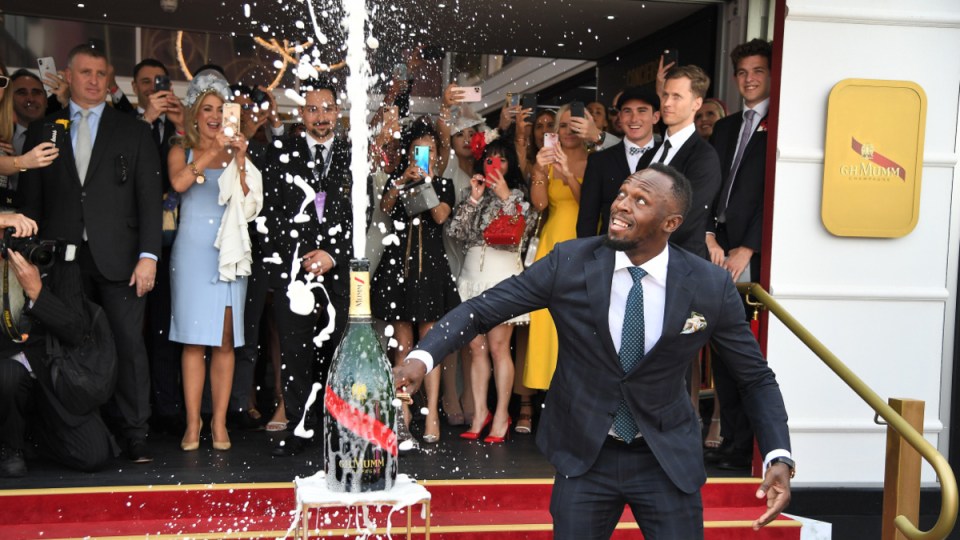 Usain Bolt opens a bottle of champagne in the Birdcage on Melbourne Cup Day. Photo: TND

It’s that time of the year when millions of Australians place their bets on the race that stops the nation.

But in classic COVID-safe style, would-be Melbourne Cup attendees will have to watch it from home instead.

This time, there will be no celebrity sightings at the Birdcage, nor scenes of drunken celebration and stilettos getting stuck in grass.

As the 2020 Cup goes virtual, The New Daily steps back in time to remember the highs and lows of Melbourne’s biggest racing day – and the forgotten celebrity guests.

‘Go and find the smallest child on this course’

In 2005, thoroughbred racehorse Makybe Diva shocked the racing world by becoming the first horse to win the Melbourne Cup on three occasions.

But that’s not the only reason people remember that historic day.

Go and find the smallest child on this course, because they will be an example of the only person here that will live long enough to see something like that again.”

The line went down in history as one of the greatest Cup moments of all time.

From Olympic athletes to supermodels, politicians and performers, the Melbourne Cup has attracted some of the biggest names in the world.

And it doesn’t get much bigger than Diana, Princess of Wales.

On Cup Day in 1985, the beloved royal turned heads by donning a suit by British fashion designer Bruce Oldfield and a hat by Frederick Fox.

And then there are the juicy hook-ups in the Birdcage.

Another Birdcage romance that stole the limelight was a multi-millionaire’s shock marriage proposal in 2014.

At 71 years old, Australian medical entrepreneur Geoffrey Edelsten stunned surrounding VIP guests when he dropped to one knee and proposed to his then girlfriend Gabi Grecko, aged 24.

Other shocking moments include American pop star Taylor Swift suddenly pulling out of performing at the 2019 Melbourne Cup after animal rights’ activists hounded her on social media.

“Taylor Swift has put money before compassion by agreeing to perform at the 2019 Melbourne Cup,” the Coalition for the Protection of Racehorses said on its Facebook page at the time.

A champion trainer’s fall from grace

Just like gambling, scandal and horse racing appear to go hand in hand.

Fresh in the minds of many Victorians is the dramatic fall from grace of champion horse trainer Darren Weir.

Once regarded as the state’s pin-up boy of racing, Weir set a new Commonwealth training record with 348 winners in a season, including the famous Melbourne Cup win of Prince of Penzance in 2015.

But in January last year, his reputation was tarnished when police raided his properties and charged him with conspiracy to cheat and defraud Racing Victoria stewards.

Weir and two others are accused of using electric shock devices, poly piping, blinkers and whistling on horses at Warrnambool in what police allege was conduct that tortured, abused, overworked and terrified the horses and caused them unreasonable pain and suffering.

The men will likely tune into this year’s Cup from home, where they remain on bail.

For all the fashion tips, food inspiration and behind-the-scenes content during this week of racing, click here.

The Melbourne Cup is on Tuesday, November 3, followed by Oaks Day on Thursday and Stakes Day on Saturday.

The scandals, celebrities and moments that changed the Melbourne Cup