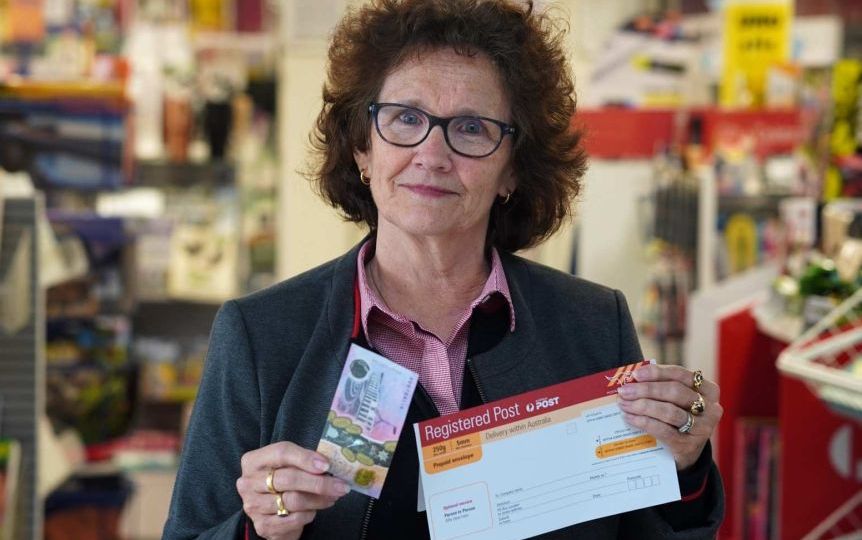 Post office licensees across the country will mail Prime Minister Scott Morrison a $5 note in a show of support for embattled Australia Post chief executive Christine Holgate, according to their representative.

Ms Holgate is the focus of a federal investigation after Senate estimates heard almost $20,000 worth of luxury Cartier watches were purchased for four Australia Post executives as a bonus for their work finalising a 2018 deal with three of the major banks.

Australia Post announced Ms Holgate would stand aside while the investigation was underway.

But the Licensed Post Office (LPO) Group said hundreds of post office licensees had expressed their support for Ms Holgate, insisting they would be out of business if not for the changes she had made to the organisation.

“We will keep going until we get some result to this – we will die without Christine Holgate, we’ll be insolvent in a matter of months or years if the next CEO goes back to the previous management model and I’m not doing that,” she said.

Ms Cramp has operated Australia Post licences on the NSW South Coast and Southern Highlands for more than 10 years, and in the past year she says she has seen business boom.

“This time last year the amount of mail currently in my mail room would have made around $7, today it is probably worth $200,” she said.

“That’s a massive difference to my bottom line.”

The LPO Group represents hundreds of licensees, who it says plans to mail $5 to the Prime Minister in a symbolic move to cover the cost of the watches.

Ms Cramp believed the watches represented a fraction of the money Ms Holgate had saved Australia Post licensees and taxpayers.

“It is minuscule in the face of $100 million in savings each year for five years,” she said.

“For the first time in 20 years I have money in my bank, not a lot of money, but I don’t wake up every morning worrying how I’m going to cover the costs of the business.”

In 2018 Australia Post secured a lucrative commitment from Commonwealth Bank, Westpac and NAB to contribute $100 million a year to fund banking services in post office branches.

The deal is at the heart of the Cartier watch controversy, but Ms Cramp hailed it as a much-needed lifeline for post offices struggling to turn a profit.

“Christine Holgate came into the business and the first thing she did was say we are effectively losing $50 million providing underfunded bank services,” she said.

“She told the banks they have to contribute and cover the cost and she got them to agree.

“I am overjoyed that somebody battered down the doors of the banks.