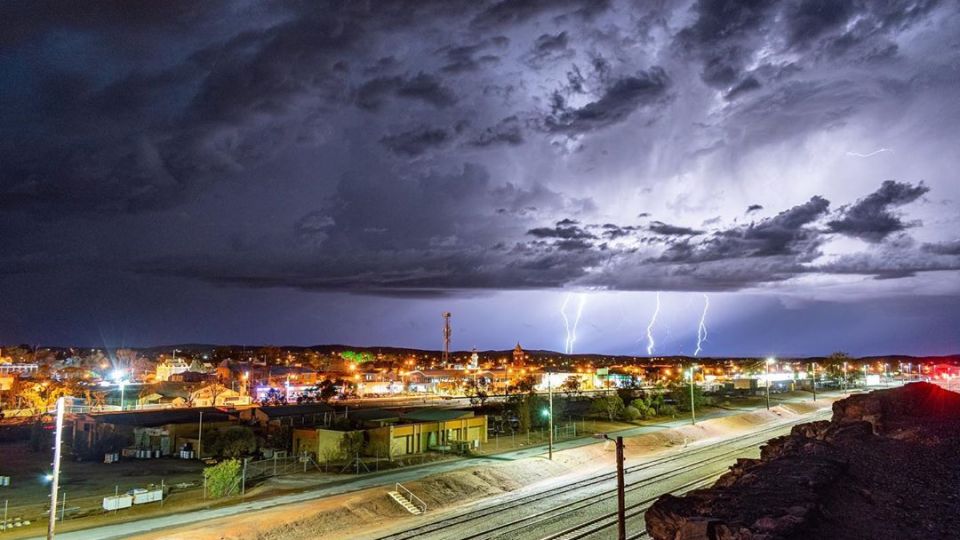 Thunderstorms lashed Queensland and NSW at the weekend. Photo: Weatherzone/Twitter

Thousands of Australians woke to no electricity on Monday after fierce winds, golf-ball-sized hail and violent thunderstorms lashed south-east Queensland, leaving one man in hospital.

The man in his 30s became trapped under a tree after it fell on him at a Karalee backyard, west of Brisbane, on Sunday.

He was taken to Princess Alexandra Hospital with head, shoulder and chest injuries, and is in a stable condition.

Power supplier Energex recorded more than 80,000 lightning strikes in the southeast from midday to 4pm.

“My ears are still ringing,” resident Tori Bradley told the ABC after lightning destroyed a large tree in her garden and made her Cornubia home shake.

“The tree just exploded — there was debris right across the [one-hectare] block,” Ms Bradley said.

The wild thunderstorms cut power to more than 30,000 homes in south-east Queensland, while high winds and flying debris brought down 207 powerlines.

Only about 5000 homes had been reconnected to the grid by Sunday night.

Networks in the Redland Bay, Mount Crosby and Bay Islands were damaged as hailstones up to five centimetres in diameter lashed the region.

Some people in those areas might not have power restored until Monday, Energy Queensland said.

Wet weather is expected to continue in south-east Queensland for some days, with the chance of more thunderstorms in Brisbane on Monday.

Non-stop rain for a week

Heavy rain is also expected to lash Sydney’s east for up to a week, with the Bureau of Meteorology warning of potential flash flooding.

“It may be heavy at times for areas around the central coastline, particularly during the parts of the morning hours [on Monday],” senior BOM forecaster Jordan Notara told the ABC.

“We expect to see the continuation of generally wet conditions, unfortunately, through the next seven days, mostly around the eastern seaboard.”

There were almost 200 calls to the NSW SES in 24 hours, as rain kept falling in Sydney on Monday.

Coastal areas were also likely to be buffeted with wind gusts of 70-80km/h likely.

Temperatures have fallen to about 15 degrees, about eight degrees below average for this time of year, due to a cold front that brought almost 10 centimetres of snowfall in mountain areas.

Sunday night’s rain led to the closure of several roads in Sydney’s north, with Wakehurst Parkway shut in both directions from Oxford Falls to North Narrabeen, due to flooding.

A severe thunderstorm and heavy rain warning that could lead to flash flooding, damaging winds and large hailstones has been issued for Lismore, Grafton, Casino and Yamba on the state’s north coast.

Meanwhile, Victoria and NSW are bracing for snow in some alpine areas.

“Snow has been falling overnight into Sunday over parts of the alpine region, and by the end of the weekend, some of the higher peaks may have accumulated around 10 centimetres of fresh snow,” a spokesman said.

“The cooler temperatures will hang around into Monday for some parts of the south-east. Canberra is looking at a maximum of 12 degrees on Monday.”
Follow Us