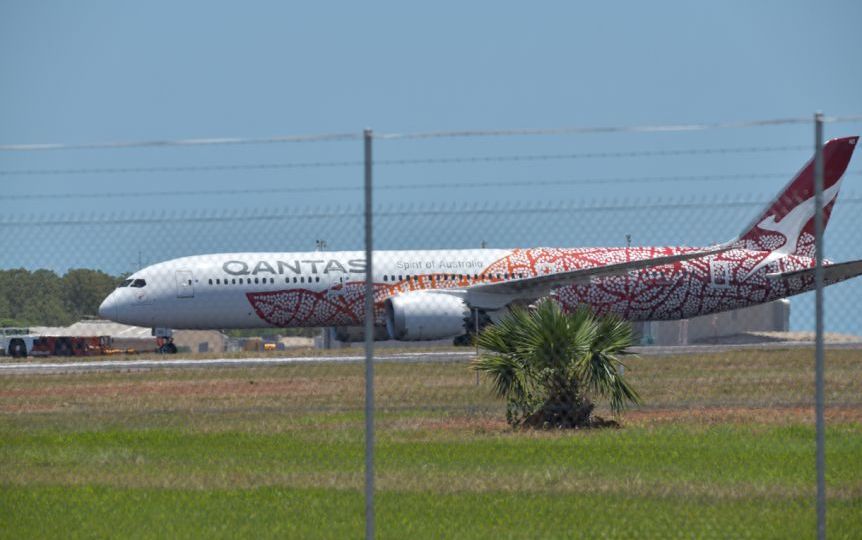 A special repatriation flight carrying 161 Australians who had been stranded in the United Kingdom has landed in Darwin, where they will begin their quarantine process in the Northern Territory.

The flight, QF 110, is the first of eight such flights, which have been chartered to repatriate about 5,000 Australians in South Africa, Europe and India back home.

The 787 Dreamliner carried the passengers, including 22 children, nine of whom are infants, from London, and they will be transferred directly from a RAAF part of the airport to the Howard Springs quarantine facility.

The direct flight was more than 14,000 kilometres and took close to 16 hours to arrive in Darwin.

The eight flights are set to bring 1,300 Australians home, but more than 30,000 Australians who want to return home are still believed to be stuck overseas.

These new arrivals will be processed at RAAF Base Darwin and will undergo health checks before being taken to the Howard Springs for two weeks’ mandatory quarantine.

Up to 500 people a fortnight will quarantine at the Howard Springs facility as part of a plan to bring Australians stranded overseas home.

The NT government has updated its guidelines for people staying inside the quarantine facility including rules that international arrivals will not be allowed to leave balconies attached to their rooms, unlike people who have travelled from interstate.

The guidelines said international arrivals will be “subject to regular health checks” to “support the early detection of COVID-19”.

Foreign Affairs Minister Marise Payne told ABC Local Radio Darwin the Federal Government was still working through whether it would consider rolling out more special flights after the initial eight.

“We will identify the need that exists to see whether we continue any flights beyond these eight flights but to load a flight of 174 passengers out of London this morning has taken 1,300 phone calls, 740 emails. It is a very labour-intensive process for our consular staff,” she said.

“It’s a complex process, quarantine, so it’s good to hear it is a well-oiled machine. This is about managing the health and wellbeing of Australians,” Senator Payne added.

“India has been a particularly difficult challenge for many Australians, there haven’t been any commercial flights from India since March except for a number of repatriation flights.”

“But it’s very important for those families who are seeing those loved ones return.”

An elite medical team will be helping taking care of the repatriated Australians arriving in Darwin, and one of its focusses will be on making sure people in quarantine do not feel isolated.

Ten clinical staff from the National Critical Care and Trauma Response Centre (NCCTRC) will be on hand to respond to patient needs once they begin quarantine.

Director for disaster preparedness at the NCCTRC, Abi Trewin, said medical staff will use telehealth services to help interact with people in the facility on a frequent basis.

“We are using a telehealth system to increase the amount of contact time we can have with people on a site.”

“That is because we know quarantine can be very isolating recognising the challenges people have faced to come home.”

Prime Minister Scott Morrison said the flights were part of the country’s “good progress” in getting Australians home.

“We continue to make good progress returning Australians home, and we want to do that as quickly and effectively and safely as possible,” he said.