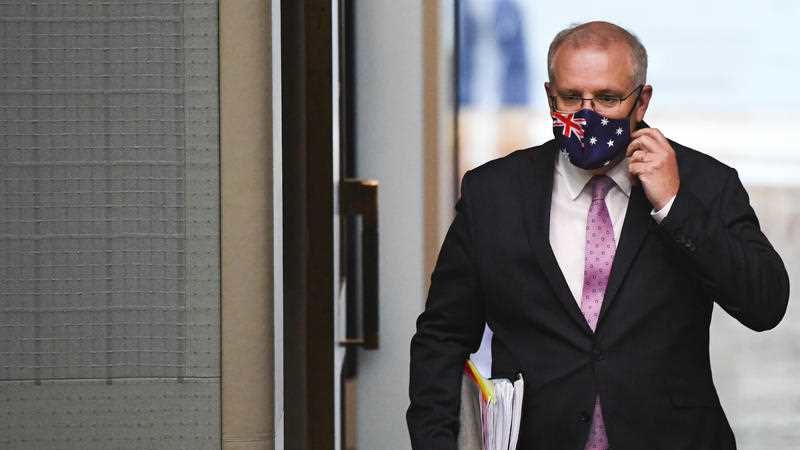 The Prime Minister addressed the press after National Cabinet on Friday. Photo: AAP

Prime Minister Scott Morrison has agreed on a plan with the states to open domestic borders by Christmas – but with a few caveats.

Speaking after National Cabinet on Friday, Mr Morrison said the plan was agreed to by all states, with the exception of Western Australia.

“We agreed in principle with the reopening framework for Australia by Christmas,” Mr Morrison said.

The agreement will allow millions of Australians to travel freely between states during the holiday period.

Mr Morrison conceded that the states and territories will make their own decisions about borders, and said he had “never disrespected that” but made it clear that premiers would need to answer to the “costs” of closing their borders.

“I’ve also made it very clear that borders don’t come without costs,” he said.

“They cost jobs and impact businesses and that cost has to be weighed up against the benefits and premiers have to explain that.”

A special Qantas flight carrying Australians stranded overseas has touched down in Darwin on Friday afternoon.

More than 150 Australians who had been desperately trying to get home from abroad since the coronavirus pandemic struck have arrived safely in Darwin, where they will undertake 14 days in quarantine.

The 161 passengers, including 22 children, will be transferred directly to the Howard Springs quarantine facility.

Flight QF 110 from London is the first of eight repatriation flights chartered and underwritten by the Australian Government to bring home about 5,000 Australians from South Africa, Europe and India.

The Prime Minister, speaking after National Cabinet on Friday, reiterated the federal government’s goal to bring home all of the stranded Australians by Christmas time.

“It is our goal to get those 26,000 Australians home that are registered by Christmas,” Mr Morrison said.

“Whether we achieve that is going to depend on many things, it will depend on flights, and be dependent on the continued cooperation of the states and territories.”

Despite firm warnings from Victoria Police and the Victorian Premier, 200 to 300 protesters gathered at the Shrine of Remembrance in Melbourne on Friday.

Police reportedly used pepper spray and made several arrests at the anti-lockdown rally, which was an unlawful gathering under the state’s strict Stage 4 rules.

Meanwhile, optimism is growing across Melbourne after the Premier signalled “significant announcements” would be made on Sunday, after the state recorded just one new case of coronavirus and no deaths on Friday.

Victorian Premier Daniel Andrews said the government is “well placed to make significant announcements on Sunday and they will be a testament to the absolute determination of the Victorian community to see this thing off.”

The rolling 14-day average for metro Melbourne now sits at 5.5 while regional Victoria’s is 0.3. Under the original roadmap out of lockdown, the target for the city was 5.

“This is a good number. This is a very clear sign that the strategy is working and that we are well placed to be able to have more to say about a program to steadily open up those safe and steady steps towards that COVID normal summer, a COVID normal Christmas and a 2021 that is vastly different to 2020.”

Mr Andrews stressed the relaxation of restrictions would be a steady process.

“It won’t be that a whole range of restrictions come off from Sunday arvo, it will be a lead-in,” he said.

NSW health confirmed no new locally acquired cases of coronavirus on Friday, for the first time in more than a week.

NSW Health’s Jeremy McAnulty said testing numbers had dropped in the state, and urged anyone with symptoms of the virus to come forward for testing.

National cabinet commits to open borders by Christmas – except WA