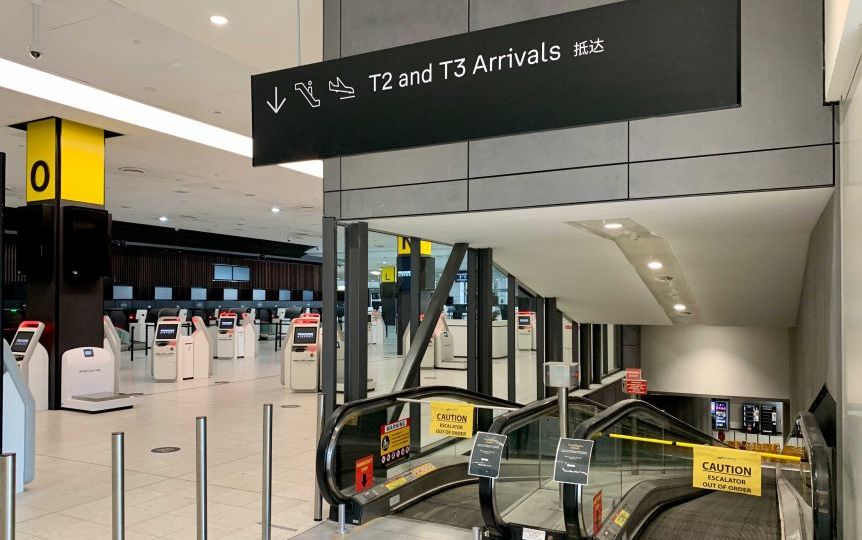 Victorian health authorities have confirmed there was another airport slip-up in July. Photo: ABC

The 17 passengers from New Zealand who flew into Melbourne last night are still in Victoria, authorities say.

The passengers, who arrived in Sydney under a new COVID travel agreement with New Zealand, are believed to have caught a connecting flight to Melbourne.

Melbourne, which is in the midst of Australia’s toughest COVID restrictions, is not currently not accepting international travellers under the agreement.

But Premier Daniel Andrews said the passengers left the airport within minutes of arriving.

“Our officers have absolutely no power to stop someone, to detain someone in those circumstances, particularly given they were coming from a very low virus part of the world,” he said today.

Victoria’s Department of Health and Human Services (DHHS) said its authorised officers did not have legal authority to detain travellers on arrival.

Police Deputy Commissioner Rick Nugent said the passengers were in Melbourne and not under any detention orders.

He said police would visit the passengers later today for welfare checks.

Overnight Victoria’s Department of Health and Human Services (DHHS) confirmed another three passengers, and that the department “does not have legal authority to detain the travellers on arrival”.

“Victoria has not agreed to a travel bubble arrangement with New Zealand and did not expect to receive international travellers as a result of NSW making that arrangement,” a Department of Health and Human Services said in a statement.

“The Victorian government has made it clear to the Commonwealth that we expect NZ passengers who have not undertaken quarantine will not be permitted to board flights in Sydney bound for Melbourne.”

The first of three flights from NZ landed in Sydney on Friday as the part of the long-awaited trans-Tasman travel bubble.

“Today is a great day, we are having the first flights in from New Zealand,” NSW Health Minister Brad Hazzard said after the arrivals in Sydney.

There will be a total of 16 flights between the Australia and New Zealand under the travel arrangements, with Jetstar and Qantas joining Air New Zealand and Qatar Airways in advertising the trans-Tasman flights.

The Australian Department of Home Affairs on its website states that “quarantine-free travel from New Zealand will initially be to New South Wales and the Northern Territory only. Other states and territories may be added at a later date”.

Melbourne residents are anxiously awaiting news of an easing of restrictions expected to be announced on Sunday.

Victoria, which had more than 700 daily infections at the peak of its COVID second wave, recorded just one new virus case on Saturday.