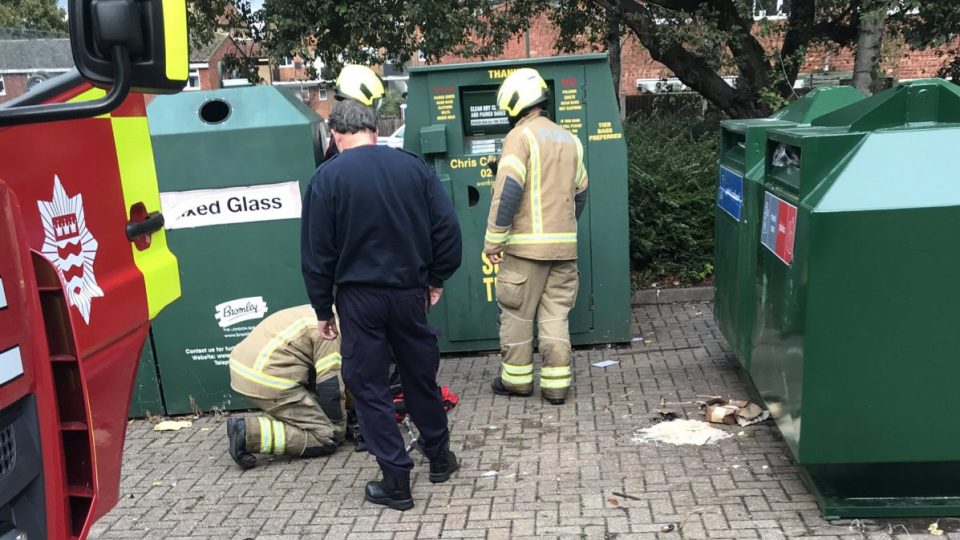 The scene outside the charity bin in London. Photo: Alan McElligott

Alan McElligott heard the cries for help from the charity clothing bin.

The associate professor from the University of Roehampton in London was dropping off some old clothes when he heard a meow.

Then another. And another.

And before long, there were three police officers, two firefighters and two community officers there to aid in the rescue of the stranded kitty.

It was thought a second cat may also be trapped inside the container.

“One of the police officers suggested we drop food in there in case the cats had been there for a few days. So I went to Sainsbury’s as I had my car nearby and bought wet cat food,” Professor McElligott said.

“The fire brigade eventually turned up and used their heavy tools to open it. Once it was opened there was no sign of the cats so the firefighter looked around and moved some pieces of clothing around and picked up the toy cat,” he said.

The rescue effort was for a battery-operated FurReal Friends cat.

“It was activated by touch so after I dropped an old pair of shoes it activated it and started making noises,” he said.

Professor McElligott said the firefighters and police officers had a good laugh and he maintained the toy made “very convincing meows”.

“I went red-faced and apologised. We all then left as quickly as possible.”