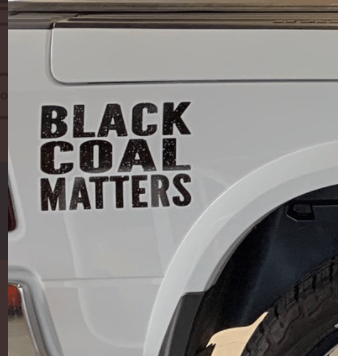 'Black Coal Matters' features on the side of a ute posted to Facebook by Matt Canavan. Photo: Facebook

Matt Canavan’s ‘Black Coals Matter’ stunt has been slammed as a “pathetic” attempt to stay relevant on day one of campaigning for the Queensland state election.

The Nationals Senator is under fire for posting a photo of a ute stamped with the altered phrase in what appeared to be an attempt to co-opt the Black Lives Matter movement slogan.

In the photo posted on Mr Canavan’s Facebook and Twitter pages, a cardboard cutout of former Greens leader Bob Brown is also pictured in the driver’s seat holding a sign advocating for the New Acland Mine project.

The caption reads: “Bob’s back! And this time he is on a mission to create 500 jobs at the New Acland Mine. If you want to join Bob’s crusade for coal jobs please join us this Saturday at the Grand Hotel in Clermont.”

Some of Senator Canavan’s supporters were happy to play along with the stunt, while others did not see the funny side.

“This is more attention-seeking behaviour from a politician who’s struggling with being irrelevant. It’s insulting and pathetic,” Labor Senator Murray Watt said in a statement to The New Daily.

“Racist and planet-trashing sentiments both rolled together,” Professor Stephens tweeted.

Another social media user wrote: “This is disgusting. They have misappropriated a label about human rights and used it for one that represents environmental destruction.”

Fans of Senator Canavan posted tongue-in-cheek comments about Mr Brown’s appearance in the photo, including: “Good on you Bob. Keep supporting the coal industry. Way to go Bob.”

The controversy came as parties prepared for the first day of formal campaigning ahead of the October 31 state election.

A YouGov poll suggests the LNP has some catching up to do, with Labor leading 52 per cent to 48 per cent on a two-party-preferred basis in Queensland.

The survey results published in the Courier-Mail on Tuesday are a reversal of how the parties stood when the last YouGov poll was conducted in June.

The latest poll has both Labor and the LNP with 37 per cent of the primary vote, the Greens are on 12 per cent, One Nation has nine per cent and Katter’s Australian Party is on two per cent.

Labor’s primary vote has risen from the 32 per cent it recorded in the poll four months ago.

Premier Annastacia Palaszczuk recorded a rise in personal popularity levels as well, with 57 per cent of respondents saying they were satisfied with the Labor leader’s performance and only 27 per cent dissatisfied. It’s her best result since November 2015.

The poll surveyed 2000 people in Queensland between September 24 and October 1.

Senator Canavan’s post has been met with disbelief amid growing support for Black Lives Matter protesters who have taken to the streets to highlight racial inequality after the death of US man George Floyd at the hands of police.

Many protests in the United States were punctuated by angry confrontations and rioting.

Less than two weeks ago a grand jury in Kentucky brought no charges against any of the Louisville police for killing Breonna Taylor, sparking fresh outrage among anti-racism activists.

Ms Taylor, a 26-year-old African-American nursing student, was shot dead in her home during a botched police raid on March 13.

The young woman has become one of the faces of the Black Lives Matter movement all around the world.

The federal government was invited to sign, but refused because the 10-point plan calls for commitments that are inconsistent with Australian policy – including a greater ambition to reduce greenhouse gas pollution and reach net zero emissions by 2050.