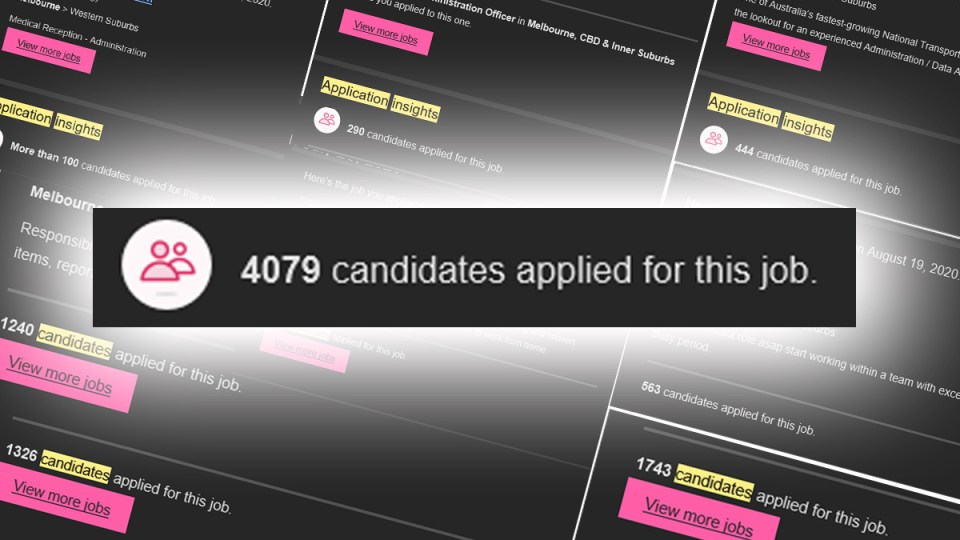 Jobseekers are competing against thousands of others for entry-level positions.

Unemployed Australians are going up against thousands of others for entry-level positions that would have only attracted a handful of applicants before the pandemic, The New Daily can reveal.

It comes as new ABS figures reveal a small sign of hope – the number of jobs vacancies increased 59 per cent over the August quarter, with the largest growth seen in the Northern Territory and Western Australia.

But there are still not enough to go around.

Cassie Francisco, 23, has been applying for jobs over the past few months in Melbourne.

She has strong experience in administration so thought she would pick up work quickly, but the pandemic has made it hard.

One entry-level job she applied for – working on a factory production line in Deer Park – had 4079 applicants.

“It’s a manual labour job. It’s hard work. It’s not like everyone is shirking hard work,” she told The New Daily.

After she applies for each job on Seek, the platform sends her an email with an increasingly disparaging figure – the number of applicants.

Since February, she said she hasn’t seen one “with less than 100 applications”. Many are entry-level positions.

“The argument people make is you need to step outside your pride and take any job you can get,’’ she said.

‘‘But you look at the figures for positions that are entry-level or junior, they’re more competitive because everyone is in the same boat.”

There are almost 1.5 million Australians on JobSeeker, and although the rebound of job vacancies around the country offers hope, it’s nothing to get excited about, said Callam Pickering, APAC economist at Indeed.

“The number of unemployed people per job vacancy eased to 4.5 people in the August quarter, much improved on the 7.1 people three months earlier, but still almost 50 per cent higher than pre-crisis levels,” he said.

“Add in the underemployed and that jumps to almost 12 people per job vacancy.”

He said competition for roles is fierce and recruiters are in the box seat.

“As such, the decision to reinstate mutual obligations, forcing those receiving unemployment benefits to search for up to eight jobs a month, is premature. For some, it will be a heartbreaking process of rejection after rejection. For many, it will be a waste of time.”

Cliff Fraser is 61. He’s one of Australia’s job seekers.

He had a heart attack while driving his truck to Sydney in 2011. As a result, he had his heavy vehicle licence taken away from him.

He now works part-time as a cleaner at a school – a job he says he enjoys – but losing the extra income meant he and his wife had to sell their house and move into a rental property.

“I’m in my 60s now, I’ve had a heart attack, my health isn’t perfect, and I apply for a lot of jobs, and I even occasionally get an interview,” he said.

“And some of them – the people are very, very polite, but you walk in, and they take one look at me, and you can just see them [think], ‘Nah, this bloke, I’m not taking him’.

“They still go through with the interview process, but you know just by looking at them as soon as you get there, that the job’s not going to happen.”

He’s done courses in hospitality and has a certificate in computer tech, but said employers don’t want someone who changed trades late in life.

“It gets a bit disheartening when you put in 20 or 30 job applications a week and you don’t even get told, ‘We’re not interested in you’.”

Mutual obligations have returned for people on JobSeeker around the country, with the exception of Victoria, meaning those receiving unemployment benefits will need to search for up to eight jobs a month.

“Up to 12 million job applications are going to be flooding businesses that are struggling to get through a recession and do not have the resources or the capacity to process these pointless job applications,” she said.

“There are hundreds of people having to apply for work that they know is not suitable for them or their skills, that they will not be able to get.”

She said the increase in available jobs was “hopeful” but was clearly not enough to dent the huge pool of unemployed workers.

One job, 4079 applications: The struggle faced by Australia’s job seekers