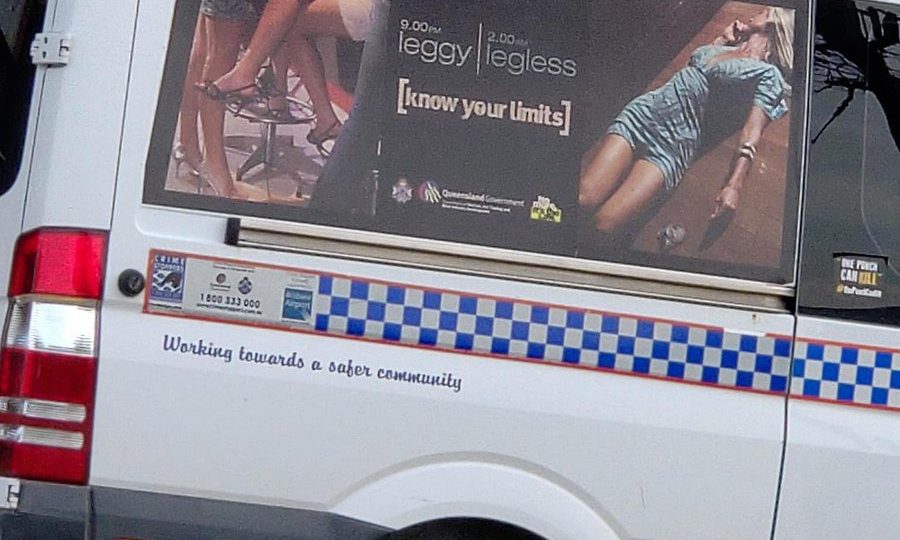 The culture of the Queensland Police Service has again been called into question after a sexist advertisement campaign used on police vehicles surfaced online.

They ‘know your limits’ campaign is from 2007 and shows a pair of female legs with the words ‘leggy’ next to an image of a woman passed out with the caption ‘legless’.

The vehicle was parked in a police depot and it is unclear if it is still in use, but the fact that it can be seen and photographed by the public sends a message, Ms Kelleher said.

“It blows my mind there’s no one within the police that might see the image regularly if it’s been around for 13 years and thought ‘Hey, that’s not OK anymore!’,” she told The New Daily.

“It can still be seen by the public.”

The advertisement, and those like it, contribute to under-reporting of sexual assault as it sends a message to survivors that the police are not there to support them, Ms Kelleher said.

“To know it’s on a current vehicle makes you second guess that if you were intoxicated and sexually assaulted you might be told ‘Oh, you were a bit drunk, it was somewhat acceptable’ if you tried to report [an assault],” she said.

“We know sexual assault and domestic violence is under-reported to the police, there are so many barriers for women until they end up being killed.

In a statement on Saturday, Queensland police said they were investigating if the vehicle was still in use.

The organisation refused to condemn outright the use of the image when questioned by The New Daily.

“Initial inquiries into a photo circulating on social media indicate it relates to a joint campaign with other stakeholders that was promoted in about 2007,” a Queensland police spokesperson said.

“If the vehicle is still in use, then the signage will be removed from it as soon as practicable. The image does not relate to a current Queensland Police Service campaign.”

The emergence of the image follows a string of controversies relating to how gendered violence is handled by police in Queensland and around the nation.

Earlier this month, Queensland police officer Neil Punchard, who leaked a domestic violence victim’s address to her ex-partner, had his sentence downgraded by a judge.

Punchard is still employed by the force but has been stood down with full pay.

Outraged that Punchard could continue to work in the force, the group Doctors Against Violence Towards Women launched a petition calling on Queensland Police Commissioner Katarina Carrol to fire Punchard.

It currently has over 46,000 signatures.

Queensland University of Technology professor and domestic violence expert Kerry Carrington said Punchard’s case was “just the tip of the iceberg” in terms of issues with how police treat domestic violence victims.

“This is not an isolated incident,” Professor Carrington said.

Pointing to the words used by Detective Inspector Mark Thompson, who said police were keeping an “open mind: as to whether the murder of Hannah Clarke and her children was a case of ‘a husband being driven too far’ ”, Professor Carrington said the culture of the police force meant officers were “ill-equipped” to handle domestic violence.

“Basically, it’s indicative of the culture, it’s widespread,” she said.

“We’re dealing with a deeply ingrained culture that is totally and utterly incapable and ill-equipped to respond to victims.”

Queensland police refused to answer questions about how it could assure the community it did not have a culture problem in relation to domestic violence and sexual-assault policing.

Some victims and survivors’ advocates say Australia is backsliding in its efforts to end gendered violence.

Last month, Victoria’s Attorney-General Jill Hennessy promised that amendments allowing victim-survivors to tell their stories without needing a court order would be introduced to parliament this year.

The gag law, which was implemented in February, puts the state at odds with the rest of the nation, where such laws have been repealed to make it easier for survivors to speak out.

Campaigners are worried that the Victorian government could adopt the “halfway” approach of the Northern Territory, where survivors are still banned from talking about sexual assault if any proceedings, including appeals, are ongoing.

“What is of most concern is the NT government took a halfway approach,” Rape and Sexual Assault Research and Advocacy chair Rachael Burgin said.

“That is a protection for rapists and pedophiles no matter which way you slice it.”

“Eighty-five per cent of all the resources … that go into fighting domestic violence go into policing it. And look at what a job they do!” she said.

“I’m saying it’s time to take it off them. Defund the police for domestic violence.”

‘Defund the police for domestic violence’: Qld Police under fire over sexist ad