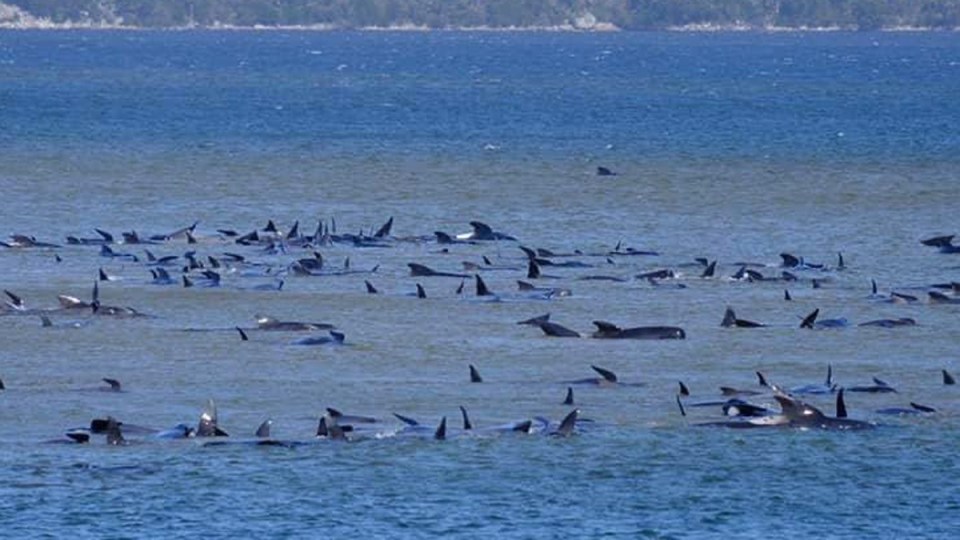 A pod of more than 250 whales have been spotted stranded off Tasmania's west coast. Photo: ABC News

Time is running out to save up to 270 whales stranded on a sandbar off Tasmania’s west coast.

Believed to be a group of pilot whales, the marine animals appear stuck on a slightly submerged sandbar inside Macquarie Heads.

Marine conservation experts have rushed to the area to help Tasmania Police and staff from the Department of Primary Industry, Parks, Water and Environment (DPIPWE) manage the incident.

A spokeswoman from Tasmania’s Marine Conservation Program told The New Daily the rescue mission could last days, but the clock is ticking to save them.

Nic Deka, Parks and Wildlife Services Northwest regional manager, said the main pod was stranded on a sandbar about 100 metres off the Macquarie Heads boat ramp, and another pod was on a sandbar several hundred metres further back.

He estimated at least 25 whales have died so far, just outside the heads on Ocean Beach.

The rescue mission is expected to start early on Tuesday morning.

But the area certainly appears to be a “hotspot”, Mr Deka said.

“Whale strandings of this scale are not uncommon … but certainly we haven’t had one for at least 10 years,” he said.

“It doesn’t happen every day, but it’s been known to happen in the past,” she told The New Daily.

“Why? It’s a complete mystery.”

Dr Bec Wellard, a marine scientist at Curtin University’s Centre for Marine and Technology, said the “strong familial bonds” of long-finned and short-finned pilot whales may explain why they are among the most commonly stranded species.

“Pilot whales are highly social. They’re generally found in pods of about 20 to 100, but some groups contain over 1000 individuals,” she said.

“When one whale becomes stranded, the others tend to follow.”

Dr Pirotta said the pod could have made a wrong turn while investigating a new area, or they may have been stuck feeding on something close to shore.

It’s also possible one of the whales was sick and became stranded and the others simply followed, Dr Wellard suggested.

Human activities that cause anthropogenic noise, like shipping or sonar activity from military bases, have also been known to confuse whales’ special navigation skills and lead them to unsafe areas.

What are their chances of survival?

“They could have a couple of hours by tomorrow, but if they’re not free then you may see a couple of individuals passing,” Dr Pirotta said.

“It is a terrible thing.”

“They can breathe fine because they’re mammals,” she told The New Daily.

“It’s the heat and the stress that causes them to deteriorate quickly and, if it’s compounded with illness, that leads to an extremely grim prognosis.

“If people are pouring water on their bodies to keep them cool, they can last longer.”

If some of the whales were unwell, their chances of survival would be even slimmer, Professor Salgado Kent said.

“They need to get back out really quickly or they won’t survive,” she said.

She added that if the whales were partially submerged, then weather conditions, tides, and the depth of the water in which they are stranded could play a role in determining whether they can escape the sandbank.

“If they’re completely stranded, then it’s not possible,” she said.

“But if not and they are in good condition, and are not inclined to restrand themselves – which often happens – an incoming tide can help.”