The Victorian government has refused to rule out a return to even tougher stage four restrictions if the number of coronavirus cases in the state continues to rise.

As 1000 more Defence Force personnel prepared for deployment to Victoria and the state posted its eighth straight day of triple-digit COVID-19 case increases, authorities warned the peak of its outbreak might be yet to come.

Victoria confirmed 177 more coronavirus cases on Monday – the first time since last Thursday its daily infections have fallen below 200.

Monday’s figure was well short of Victoria’s record high of 288 infections reported last Friday, and the 216 confirmed on Saturday and 273 on Sunday.

The state now has 1612 active cases, with 72 people in hospital – including 17 in intensive care.

There are now 242 cases in residents of public housing towers in North Melbourne and Flemington that went into hard lockdowns a week ago.

There are also 32 cases in residents from housing estates in nearby Carlton. Any potential links between infections in the estates are being investigated.

Victorian Premier Daniel Andrews said the lockdown in metropolitan Melbourne – which covers 32 local government areas home to an estimated five million people – would continue “as long as it needs to”. It is in place until at least August 19.

“It need not be there for a moment longer than absolutely necessary if everyone simply follows the rules and does the right thing,” he said.

“The notion this is simply something that will be tragic if you’re very ill already and very old, that is simply not right,” he said.

“This can have catastrophic outcomes, tragic outcomes for people who are otherwise healthy and people in any age group.”

Asked on Monday about the possible imposition of stage four restrictions, Mr Andrews said he could not rule that out.

“That’s in the hands of hard-working Victorians, people in every family right across metropolitan Melbourne and Mitchell Shire, and indeed, regional communities,” he said.

“If you don’t want a stage four, if you don’t want the lockdown to last a moment longer, then please follow the rules. Do the right thing by your family, your community, and every family.

“The key point is we’ve just got to stay the course, otherwise those sort of options will be our only options.” 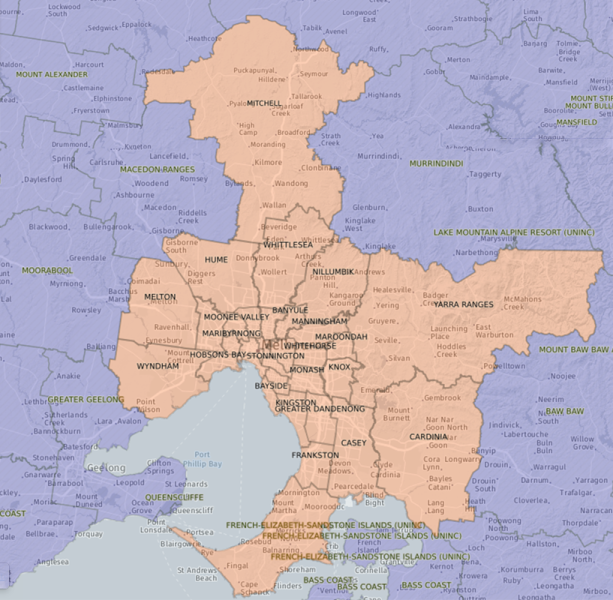 Chief health officer Brett Sutton said he was not ready to be complacent about Monday’s 177 cases despite admitting a “small bit of optimism” about the drop by 96.

“I’m not going to be complacent about today’s number,” he said.

“It’s great that it’s lower than our peak, but it may not be our peak yet. I’d like to see a week of decreasing numbers before I come and say I’ve got greater comfort about the direction we’re going in.”

“This is to protect Victorians, to help contain the virus,” he said on Monday.

About 9500 vehicles have been stopped at checkpoints on main arterial roads and 22 fines handed out.

Five people who travelled from metropolitan Melbourne to go camping in Myrniong, about 72 kilometres north-west of the city, were also fined.

Students temperature-checked upon return to school

Victorian students in years 11 and 12 and those at special schools returned on Monday morning.

The remainder – students from prep to year 10 – will have another week of school holidays before resuming remote learning next Monday (July 20).

The decision affects 700,000 students and will be in effect until August 9.

The new cases include:

The outbreak at Al-Taqwa College in Truganina, in Melbourne’s west, is the state’s largest cluster. It now has 144 confirmed infections.

A cluster at the Menarock Life aged-care home in Essendon is of increasing concern, with 26 cases in staff and residents. It is Victoria’s biggest cluster yet in an aged-care facility.