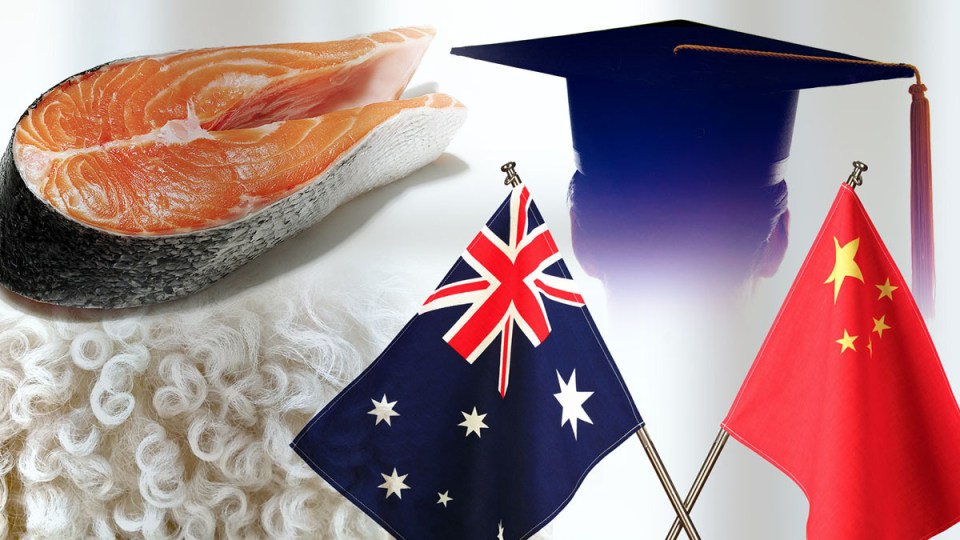 Australian industries are under threat from rising tensions with China, economists warn.

The Sino-Australian relationship has become increasingly rocky, with the latter denying it launched the huge cyberattack that rocked Australian software systems on Friday.

Among the escalating tensions, concerns are growing for Australia’s export industries.

China has already placed more than an 80 per cent tariff on barley exports, and many other Australian industries are in vulnerable positions The Australia Institute’s lead economist Roland Rajah says.

“China does have a track record of looking to use economic leverage to achieve its broader diplomatic aims, that’s something everyone in Australia has been worried about,” he said.

“There’s a wide range of areas like education and tourism. They’ve already said things about those, but they’re already affected right now because of COVID-19.

“They could go further. They might look to agriculture sub-sectors, the wool industry, wine exports, cotton, fruit and nut, dairy, other meat exports beside beef.”

Australia’s big three exports to the Asian superpower – iron ore, natural gas and coal are not expected to be affected by escalating tensions because of China’s need for them, he said.

“The way I like to think of it is, yes they take almost 40 per cent of our exports, but I think of it as a relationship with inter-dependence. Mining, coal, LNG – they’re critical imports to China.”

Wool is one industry under threat. Demand has fallen due to COVID-19 and prices have plummeted to a five-year low.

The wool industry exports around 80 per cent ($3.16 bn) of its total production to China. But Wool Producers Australia chief executive Jo Hall said they were confident in their relationship.

“We have a mutually beneficial relationship with China,” she said.

Yes, we’re concerned, but we’re also optimistic given we have this long-standing relationship.

“We are the largest producer of wool. It’s unlike barley or feed, they can’t just go elsewhere and find the volume they require.”

Diplomatic tensions have been simmering for some time, but they spiked last month after Australia called for an investigation into COVID-19’s origins, with Beijing labelling the move as ‘politically motivated’.

The barley tariff was just the beginning.

China has since suspended some major Australian beef imports and told its citizens to re-think travel to the ‘racist’ country.

Just this week, it sentenced an Australian man to death for drug smuggling.

The fallout has spurred questions over Australia’s economic dependence on the Asian powerhouse, and if we should be striving to diversify our markets.

When anyone says we’re too dependent on China, that implies we could be more dependent on someone else,” he said.

“The data is clear – the annual value of our exports has gone up by $180 billion but it’s been possible because of China. China has accounted for 60 per cent of the jump.

“Yes, it would be nice, we could sell more, but who are we going to sell our goods and services to?”

Largely, diplomatic tensions have been separate to our economic relationship, Professor Laurenceson said.

“If you look at the Australian government we haven’t had an Australian Prime Minister visit China for a stand-alone trip since April 2016,” he said.

“China has been annoyed with us for four years and for each of those years trade between China and Australia has hit a record high, this idea it spills off into the economics isn’t in the case.

The Australian policy position hasn’t changed overall and the economic side has flourished.”

This tension is far from a divorce, said UNSW economics professor Tim Harcourt.

“It’s not a divorce, it’s like we’re moving into a warehouse,” he said.

“I think it’ll be a little bit rickety for now. But I think the economic fundamentals will allow it to settle down.

”When people want to make a noise they’ll try and pick one industry off, but at the end of the day, China needs food security and are they going to send Chinese student to the US during a pandemic?

“Clean, green and corona free – that’s what we are.”

Although the strength of our economy relies significantly on China, we aren’t alone, he said.

“I think people forget China is the number one trading partner for a lot of countries. They’re having a stoush with France, Canada, Czech Republic, South Korea, they’re fighting with everyone at the moment.”

From salmon to education: These sectors stand to lose the most in a China trade war