More than 8000 people have flown into Australia since our borders closed due to the coronavirus, the latest government data shows.

On March 20, the Morrison government officially sealed Australia’s borders to try to contain the spread of COVID-19.

On Wednesday morning, Australians could breath a sigh of relief after authorities confirmed they had not detected any new COVID-19 cases spreading in the community in the previous 24 hours.

The nation had just two new cases of coronavirus to report – both were returned travellers in hotel quarantine in Sydney.

But not everyone has been forced into quarantine when they arrive in Australia – and some returned travellers, including a diplomat who lives in Canberra, have exposed others to the virus. 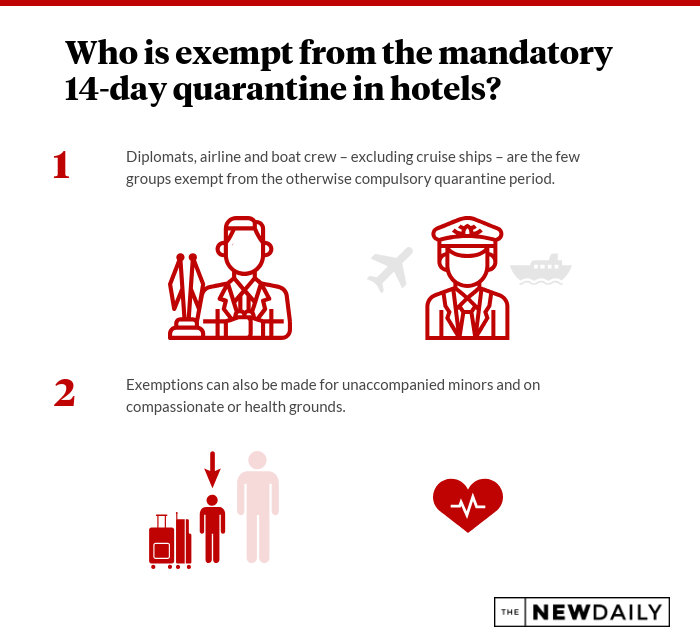 Between March 20 and June 1, more than 8000 people arrived at our international airports, data from Australian Border Force reveals.

The New Daily obtained the arrival figures after a diplomat aged in his 40s tested positive on Saturday after he returned from overseas.

He did not have to undergo 14 days of quarantine in a hotel.

The diplomat reportedly drove from Sydney Airport to his Canberra home.

He is the first case of COVID-19 in the ACT in more than a month and his family has since been exposed to the virus.

It’s not the first time a returning traveller has unknowingly brought COVID-19 here from overseas, and it’s possible he won’t be the last.

Most of the arrivals were Australian citizens or permanent residents returning home, though some were foreign travellers granted special exemptions for compassionate or compelling reasons.

One such person is Austrian woman Monica Ashton, whose Australian father-in-law was recently diagnosed with a rare “one-in-a-million” type of cancer.

“We decided to come home as quickly as possible,” Ms Ashton told The New Daily from quarantine at the Pan Pacific Hotel in Melbourne.

“Everyone was super nice and friendly at the airport. I found it funny being back in Australia after living in London – it just says ‘welcome’.”

Puzzled by news reports that the latest Covid-19 victim had ‘recently returned from overseas’. I thought international flights had been banned for months.

Ms Ashton, who is also a permanent Australian resident, added the airport staff went the extra mile to ensure her brother-in-law, who was flying home from Canada around the same time, would stay at the same hotel as she and her husband.

“I was really impressed that they actually cared to go to all this effort,” she said.

“The situation is quite sad and to be alone for two weeks would be tough.”

Strict travel rules mean all travellers arriving in Australia must undertake a 14-day quarantine at hotels at their port of arrival.​

Though it has applied to the vast majority of travellers, the measure has not stopped the coronavirus spreading from one person to another.

Those under quarantine at the hotel, Rydges on Swanston Street, have since been relocated due to the number of hotel staff members in self-isolation.

Even so, the 14-day quarantine period isn’t fail-safe.

The time between exposure to the virus and becoming infected can take up to a fortnight, but it can sometimes be longer, the WHO says.

This means a returned traveller could be infected with the virus days after leaving their hotel.

Meanwhile, Qantas and Virgin Australia have regrounded their remaining international passenger flights after government funding ran out for the few overseas routes they were flying.

The Morrison government said it was reviewing whether it needed to fund further flights to get Australians home from abroad as some overseas airlines resume flying here.

Under the program, Qantas was flying a London-Perth-Melbourne return service twice a week and a weekly Los Angeles-Melbourne service.

Virgin Australia, which is in voluntary administration under a mountain of debt, was flying a weekly Los Angeles-Brisbane service that ended on Sunday.

Australia’s borders are closed? There’s 8000 reasons that’s not quite true