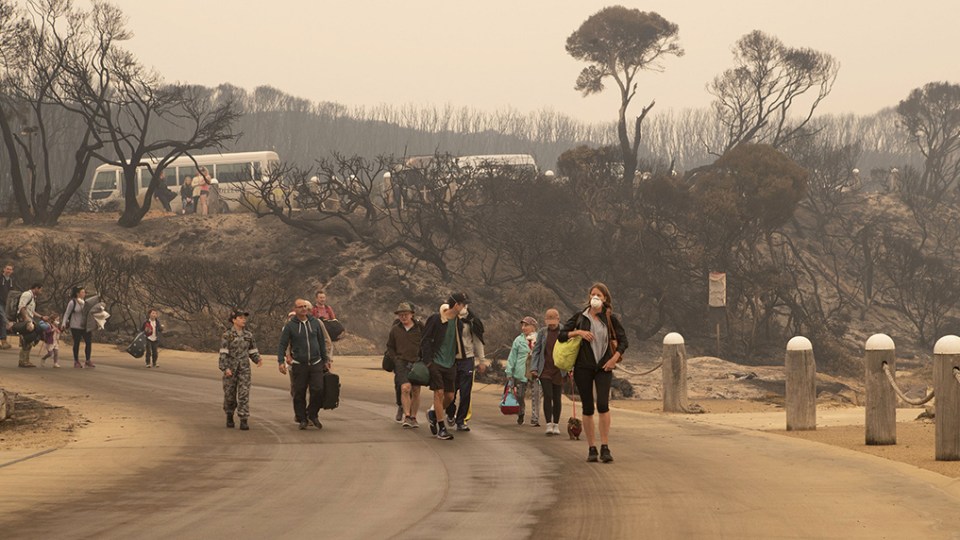 Mallacoota locals during the bushfire crisis in January. Photo: AAP

“It was an absolutely terrible feeling, not knowing how people were or if they had even survived,” the East Gippsland Mayor told The New Daily.

But it was just one of many horror memories from the bushfire that cut off Mallacoota during Australia’s catastrophic 2019-20 bushfire season.

On Tuesday, the Royal Commission into National Natural Disaster Arrangements will hear from two locals – Tim Cashmore, principal of Mallacoota P-12 College, and Kirsty Hargreaves of Mallacoota Real Estate – as they revisit the January nightmare.

The pair will have their pre-recorded accounts of the crisis played before commissioners on Day Two of the royal commission.

Read on below to recap Day One.

Day has just turned into night in #mallacoota pic.twitter.com/FCUc8zfqFP

Large fires like the 2019-20 bushfires are occurring more frequently and fire weather will intensify into the future, its head of climate monitoring Dr Karl Braganza says.

“This isn’t a one-off event that we’re looking at here,” he told the royal commission as its hearings began on Monday.

He said since the 2003 Canberra fires, all states and territories had experienced significant fires that challenged the response and thinking about fire weather.

“The frequency of these events, if we look at the historical record, seems to be increasing,” Dr Braganza said.

Research by the bureau and the CSIRO shows the fire danger is very likely to increase in the future for many regions of Australia, exacerbated by the increased occurrence of extreme heat.

Southern Australia is also expected to continue to experience an increase in dangerous pyroconvection conditions, where fires burning in heavily forested areas generate their own weather and thunderstorms.

“The risk of fire danger is both due to the long-term drying and warming, which is conditioning the landscape, but also the extreme fire weather that is observed partly due to climate change,” Dr Cleugh said.

“The tragic loss of life, the destruction of homes, the significant loss of livestock and millions of hectares of forest has been devastating, and continues to deeply affect people and their recovery,” he said.

Senior counsel assisting the commission Dominique Hogan-Doran SC said as a result of the pandemic, the recovery from the devastating impacts of the fires has been slow and fragmented.

“Planning for future seasons appears to have been interrupted,” she said.

NSW woman Sue Townsend, who lost her home in the Tumbarumba fires, said survivors felt like they were in limbo.

“There really is a high level of distress and it’s affecting people both physically and mentally,” Professor Townsend said in pre-recorded testimony.

“Having the virus come in on top of the recovery from the fire has been a double whammy in that it has isolated us from each other.”

The 2019-20 bushfires that killed 33 people and destroyed 3094 homes are expected to rank among the most damaging seasons since 1925, natural hazards research centre Risk Frontiers said.

It was by far the most damaging season for NSW in terms of destroyed homes, Risk Frontiers’ Dr Ryan Crompton added.

Dr Braganza noted the outlook going into the next fire season was for wetter conditions for Australia compared with the past two years.

“…Beyond that, it’s difficult to say except that the trends probably load the dice towards worse fire seasons in general.”

An unlikely alliance of business and environment groups has banded together to make a stand on the importance of a cleaner economy.

The group say that beyond the coronavirus pandemic, Australia’s prosperity depends on dealing with long-term challenges like moving towards net zero emissions.

“Economic recovery efforts can and should contribute to addressing these long-term challenges,” they said in a joint statement on Monday.

“Our organisations encourage governments to bolster their jobs and recovery strategies with measures to reduce emissions and accelerate successful energy transitions across all Australia’s regions and economic sectors.”

‘Waiting for them to come home’: Bushfire royal commission to remember Mallacoota