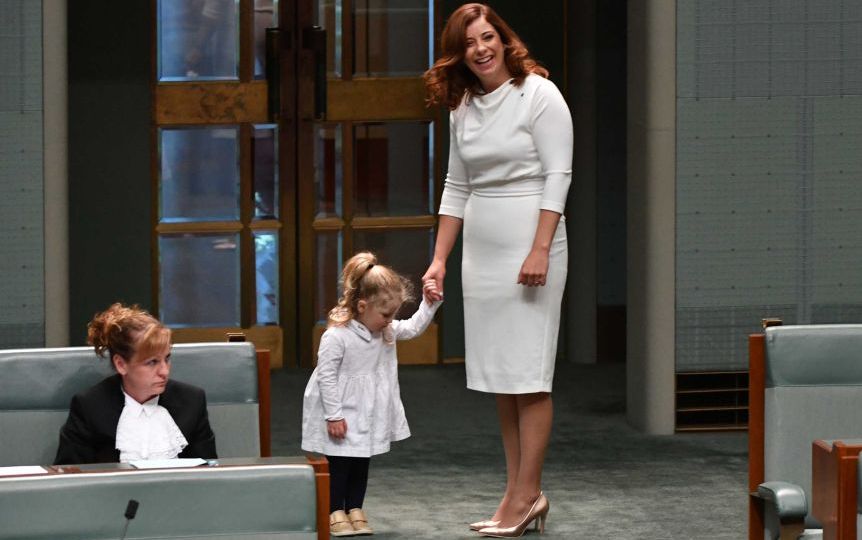 Anika Wells, pictured with her daughter, thinks it's time to shake up how we work. Photo: AAP

The Queenslander is adamant “she isn’t Robinson Crusoe” when it comes to juggling the demands of politics and parenting, with a number of female politicians managing the task before.

But as she prepares for life with three children under the age of four alongside husband Finn, the Labor MP is arguing now is the time to give Australia’s workplaces a shake-up — even if her role requires extensive travel to and from the nation’s capital.

“Plenty of families deal with FIFO arrangements, or our ADF personnel who travel overseas for extensive periods of time,” Ms Wells said.

“What my mind has been occupying itself with in the weeks of working from my deck – since we found out the news that it was going to be twins and not one – is how much potential [there] is in the flexible arrangements we’ve been forced to live under during COVID-19.

“By no means is COVID a best-practice model … but it has shown us we can be an awful lot more flexible than previously has been the Australian culture.”

Millions of Australians have upended their routines as tough social restrictions were put in place to slow the spread of coronavirus, swapping a daily commute to the office for a shorter journey from the bedroom to the living room.

Video conferencing has replaced face-to-face meetings, suits and ties have been left hanging in wardrobes, and balancing spreadsheets and child supervision has become something of the norm.

But with restrictions starting to ease across the country, Ms Wells said the eye-opening experience that work from home has provided the nation shouldn’t be lost.

“When the average Australian is a 38-year-old working woman with two kids, why are we all accepting a system that was built in the industrial revolution?” she said.

“It’s all based on an archaic notion that you need to be seated in a communal workspace between 9[am] and 5[pm] to be a productive worker, and that you have a person warming you a casserole at home — it’s completely antiquated.

“We have a work hustle fetish … and we need to do better.”

Global business consultancy KPMG is among those looking at the issue of how workplaces will change in a post-coronavirus age.

Among its forecasts, proposals that working remotely will continue to rise “across all industries”, and that the standard 9am to 5pm workday will be questioned.

“Our school system has an average of 12 weeks school holidays per year, but the average Australian worker has an average four weeks annual leave per year – good luck everybody, making the gap work,” Ms Wells said.

“If you are a productive and happy worker, why can’t you be able to choose the hours that you work to give you crossover collaboration time with the particular team that you’re in?”

Elizabeth Hill, a University of Sydney researcher who focuses on the political economy of gender, work and care, warned against people worrying the current situation, and the stress associated with it, would become the “new normal”.

“At the moment, we’re in this kind of crisis moment,” Associate Professor Hill said.

“Many households have layers of work and care going on.

“They’ve got toddlers or they’ve got primary school kids that they’re doing homeschooling with. They’ve got extra responsibilities for their aged parents or their neighbours.

Working at home will look very different in a non-crisis moment … it will be quite different.’’

Associate Professor Hill said she believed change was in the air, particularly when it came to acknowledging the importance of child care.

“Some of the big workplaces are actually thinking about how to expand and extend their offering around flexible work.

“But the important piece there is that it moves from something that women predominantly ask for or request, and something that is often delivered to women, and becomes something that men feel very comfortable requesting.

“And, more importantly, that their workplaces actually deliver it.”

Ms Wells sought the advice of Labor frontbencher Amanda Rishworth, who gave birth to her second son while in office, before entering politics.

Curious whether other politicians had found themselves juggling a political career and twins, the Queensland Labor MP asked the Parliamentary Library to look for other examples.

They could only find two at a national level – Canadian MP Niki Ashton, who gave birth to twins in late 2017, and former US Congresswoman and Senator Blanche Lincoln, who had twins in 1996.

Ms Wells argued politicians were best placed to have the debate on how to shape the modern workplace.

“We are the people that can drive that structural change because we are living that hustle like the constituents we represent,” Ms Wells said.