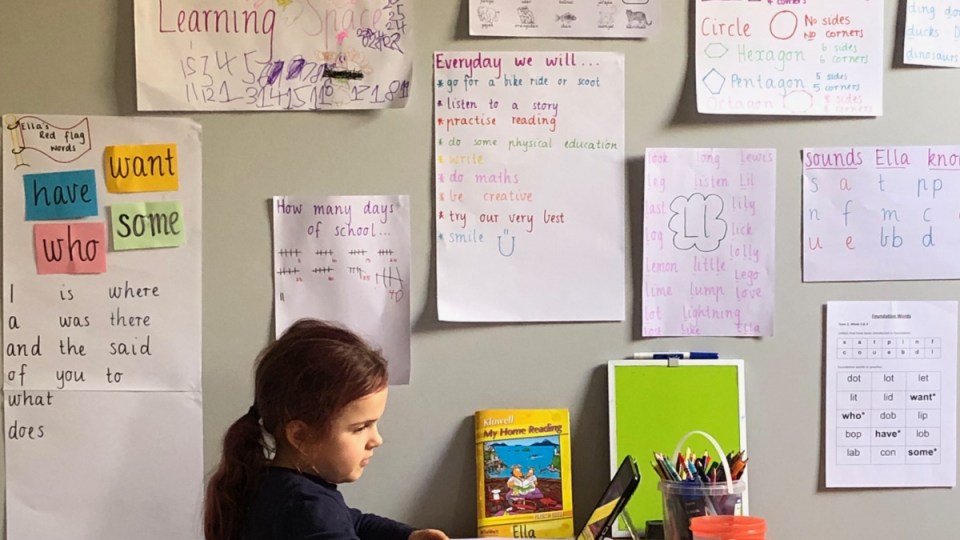 Australian students like Ella Martin have shared how they are managing remote learning in lockdown. Photo: Ash Martin

Navigating the pitfalls of school is often hard enough, but throw in a coronavirus pandemic and this generation of Australian students have got their hands full.

Debate continues to rage as to whether schools should be reopened during the crisis so students have no choice but to just get on with it.

And they’ve had their struggles. Choppy Wi-Fi? Check.

Do-it-yourself gym equipment? Check that one too.

The New Daily spoke to five students to get an insight into the benefits and challenges of online learning.

Lily Hosking, 16, and her sister Amelia, 8, live on a farm in the regional town of Quambatook in Victoria.

In an area where internet connection is unreliable, making the switch to remote learning has been particularly hard.

“It’s not good out here with the Wi-Fi,” Year 10 student Lily told The New Daily.

“You have to swap between hotspots and sometimes it drops out.”

“The biggest challenge is staying motivated and not having the support when you immediately need it,” she said.

Year Three student Amelia said it was hard to stay focused when people entered the kitchen, “especially when my sister makes a smoothie”.

“I don’t get to see my friends much anymore,” she said.

“But now I get to spend more time on the farm, usually feeding the lambs and rounding the sheep.”

Ella Martin, a prep student at Torquay College along Victoria’s Surf Coast, said she had been missing her teacher during coronavirus lockdown.

“I miss my teacher, Ms Jones, and the fun things we get to do there like learning the alphabet letters.”

In the rural Victorian city of Wangaratta, 12-year-old Matilda O’Brien said the transition to online learning had been easier than expected, and in some ways better than going to school.

“Connecting with your teachers is easier than I thought,” the Year Six student told The New Daily.

“Usually we have so many kids in our class, so it’s a bit harder, but this way I get more one-on-one time.”

Each school morning Matilda attends a Google Meet conference call with her teacher, who assigns the students tasks and outlines the day ahead.

Two more Google Meet sessions are scheduled throughout the day when her teacher checks in to see how the students are tracking.

Though Matilda said she’d rather be at school with her friends, she also said her time in home isolation had given her a new life perspective.

“One of my friends said it was good doing remote learning because you get to appreciate the world around you more and I agree with her,” she said.

Harry McKenzie, a Year Nine student at Brighton Grammar School in Melbourne’s bayside suburbs, said he had no complaints about classes being conducted online.

“It’s pretty similar to the classroom – we can use a ‘raise hand’ function to ask the teacher questions,” Harry, 15, told The New Daily.

When asked if it was easy to get distracted at home, Harry said a few of his friends had lost motivation.

“It’s quite easy to not do work and do something else instead,” he said.

As part of his school’s education plan under lockdown, students are encouraged to spend one class period each week learning a new skill.

“I’ve built a home gym with a few things around the house, like bricks and things,” Harry said.

“I found a plastic thin pipe and threaded it through the holes in the bricks and taped it up to make barbells.”