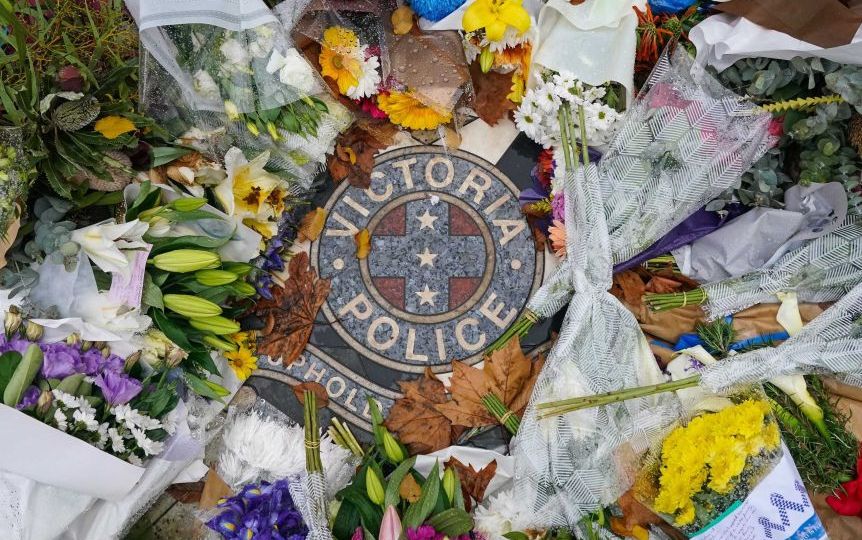 Victoria Police has been rocked by the deaths of four of its officers. Photo: AAP

Mourners will gather on Monday to pay their respects to Constable Josh Prestney, in what will be the final funeral for the four police officers killed when a truck ploughed into them on a Melbourne freeway.

It comes as the driver allegedly behind the wheel of the truck broke his silence, saying in a statement he was “genuinely sorry and saddened” by the deaths.

Mohinder Singh, 47, expressed the sentiment through a short statement released by his lawyer Steve Pica on Sunday.

“He is acutely aware of the impact upon the families, friends and work colleagues of those that lost their lives,” Mr Pica wrote of Mr Singh.

Continuing a weekend of mourning for the Victoria Police community, family of Constable Prestney will gather at his former school, Xavier College, to say goodbye on Monday.

His funeral is also expected to be live-streamed to family and friends, in line with the plans to make the service accessible during coronavirus restrictions, which limit the number of mourners to 10.

In a tribute to their son last week, Andrew and Belinda Prestney explained how their lives had been turned upside down by the loss of the “loving” young man.

The rookie policeman had graduated from the force’s academy in December, following the same career as his younger brother Alex.

“The proudest moment of our lives was when Alex presented Josh with his badge at the graduation ceremony,” the parents wrote.

His partner Stacey had lost her “angel”, they said, adding their “hearts bleed for her”.

“The thought of never hearing his guitar playing throughout the house, never sharing our sporting adventures together again, never going to the football with him again, never laughing over silly family jokes with him again breaks our hearts and fills us with a pain that has taken our breath away,” Mr and Mrs Prestney wrote.

Three other families have already said their goodbyes in restricted services in recent days, with plans afoot for state memorial services after virus restrictions ease.

They also escorted remains of Constable Glen Humphris back to NSW, before being met at the border by interstate colleagues who then journeyed to the officer’s final resting place in Newcastle.

As the hearse made its way north from Melbourne, police stood on the side of the road and saluted the fallen constable.

“At practically every juncture there were officers lining the freeway, saluting as the hearse went past.

“It was not something that was requested. The members decided to do that of their own imitative and it was very humbling to see.”

Constable Humphris’ grieving partner, Todd Robinson, had farewelled his “bubbly, outgoing and loving” soulmate at a small ceremony in Melbourne on Friday.

The officer had been with the force for less than a year when the group of officers was hit by a truck while helping impound a Porsche in the emergency lane of the Eastern Freeway on April 22.

Mr Singh has been charged with culpable driving.

The Porsche driver Richard Pusey, who allegedly fled the crash, is also facing a string of charges.

Amber Heard’s sister and friend give evidence
‘Should have been a penalty’: Boy crash-tackled by PM gives his verdict
Apple sued over ‘ear shattering’ AirPods alert
Russian Google to file for bankruptcy
Man arrested at NSW school for bestiality
Concern about COVID-19 deaths in aged care
A daughter fears for elderly mum in the nursing home where coronavirus has claimed 14 lives
Today's Stories